DERYNEA: Tribute to the Smyrna song - "Rebetiko with the aroma of Smyrna"

In this performance, monumental songs from the entire spectrum of the Smyrna period will be heard 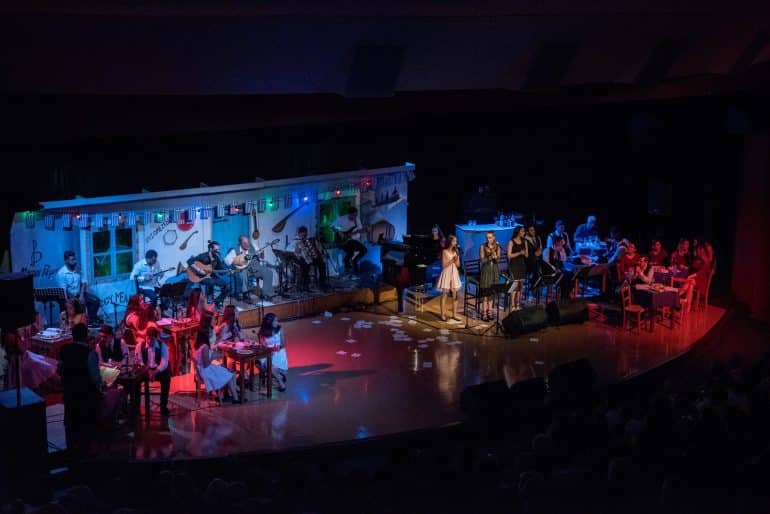 2022 is a special year, as it coincides with the centenary of the Asia Minor disaster.

The consequences of the Asia Minor Catastrophe had a decisive effect not only on the great national themes, but also on the development of urban folk music, which was influenced, strengthened and enriched both by soulful material and musical forms that came from the shores of Asia Minor, many times over. as unique baggage of the uprooted. Through this world that was a stranger in Turkey and a stranger here, intellectuals, entrepreneurs, but also insurmountable musical geniuses stood out who are mentioned with awe and respect to this day and as such will be mentioned in eternity.

The Mikri Rebetes, choose this period of history and will put on a tribute show to the Smyrna song entitled- "Rebetiko with the aroma of Smyrna". In this performance, monumental songs from the entire spectrum of the Smyrna period will be heard, thus conveying the aesthetics and culture on which the good folk song was built a little later. References are made to historical events that marked that period and inevitably had a catalytic effect on the rebetiko song.

Accompanying the Mikris Rebetes is the dance group of the Municipality of Deryneia "Drymio", which will accompany the performance with dance.

The show is scheduled for August 31, 2022 at 8:00 pm at the Deryneia Municipality Amphitheater.

Under the auspices of the Secretary of the Council of Ministers Mr. Theodosis Tsiolas and with the support of the Youth Organization.

Who are the "Little Rebels"

The choir "Mikroi Rebetes" was created in 2013 by Mr. Giorgos Dimitriou and his love for music. He himself had a vision of creating a musical ensemble that would occupy the children in a time of crisis without burdening their parents and which would be able to engage in singing. The name of the choir came from the repertoire performed by the children, with songs by great composers such as Markos Vamvakaris, Vassilis Tsitsanis, Giorgos Mitsakis, Manolis Chiotis and many other musicians of the genre.

The choir is mainly made up of young people, while as for who can become its members, the conditions are simple since they can be children who love singing and have a will. This is not a conservatory but a group that loves rebetiko singing and wants to pass it on to new generations. Rebetika is a species that requires a lot of work and method. Through the choir, a child not only learns to sing but acquires experiences, socializes, recognizes the values ​​of life and gains moments that will be remembered forever.

What is worth emphasizing is that the "Little Rebetes" are considered to be the only youth choir in Panhellenium that deals exclusively with rebetiko singing and they have performed over 500 rebetiko songs by all the composers of the genre and at the same time they have studied and performed well-known traditional Smyrna songs even unknown pre-war and post-war songs, the well-known Piraeus songs.

The choir in question has made several television appearances, while of course they are not absent from the festivals organized by the Municipalities as well as in large tributes.