Historical Moment: The Cypriot theater was awarded at a Turkish Festival

"Let us make theater, not wars" 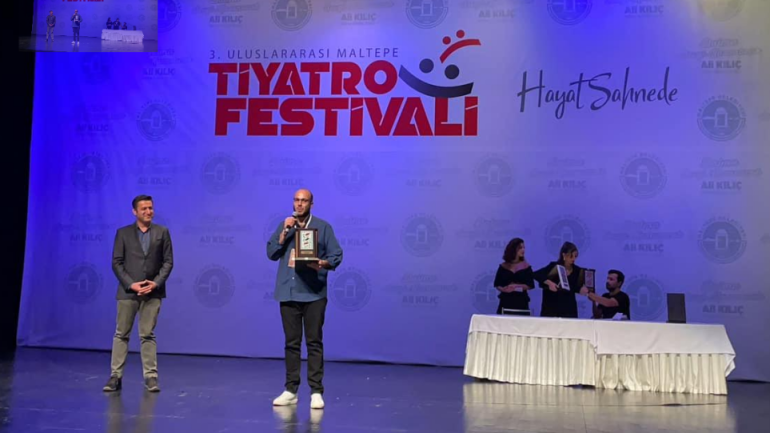 For the first time, Cypriot theater was awarded in Turkey at a Theater Festival, receiving the Director Award and the Award for Best Actor.

The performance of the adaptation of the play "Waiting for Gondo" by Samuel Beckett in the Cypriot, Greek and Turkish dialects, from the Antilogos Theater, triumphed last night at the award ceremony of the Maltepe Theater Festival in Istanbul. The festival was attended by 15 plays from countries such as Russia, Azerbaijan, Georgia and Ukraine. The director's award went to Costas Sylvestros and the Best Actor Award went to George Kyriakou and Izel Seilani.

Let us make theater, not wars

"Let us make art and theater together, not wars", were the words of Costas Sylvester when he took the stage to receive his own award for directing. He himself took the stage to receive the awards of George Kyriakos and Izel Seilani, who were in Cyprus at the time, giving another performance of the play and eagerly awaited to learn the decision of the jury. "We are all happy for this award because we are a team, we all work together for peace and love on our small island," said Costas Sylvestros from the stage receiving this award.

Excited, he came down from the stage. "I still do not believe what I live here," he confessed. He was very anxious because he felt that something big was going to happen. After all, the insistence of the judges and the Mayor himself to leave even one for the award ceremony, had made them suspicious? "You say we get the prize," he wondered. "You will get it, you will definitely get it", we told them with certainty as soon as we watched the show. It was shocking.

Costas Sylvestros took a classic work and gave it another dimension. He placed the two heroes of the play on the green line in Nicosia and had the ingenious idea of ​​being embodied by an E / K and a T / C, one speaking in Greek and the other in Turkish, each in his own dialect. All they do is wait for Gondo, the days and nights pass and they wait. In front of the spectator unfolds the theater of the absurd just as we have been living in Cyprus for so many years. There is nothing political in the work, no political dialogue, but the work itself is a huge political message.

Mayor Maltepe: I see Cyprus as one

"I see Cyprus as one, I believe it must be united, I believe that all Cypriots can live together, that the borders can be abolished, it is enough to get rid of the prejudices and the walls we have in our heads," he told KYPE Mayor Maltepe Ali Kilic.

As he said, "politicians can sometimes be confronted, confronted, but the brotherhood of peoples can torpedo this political disagreement, to end it, I believe. As in Cyprus, I see Cyprus as a single ".

As he noted, "it is a great honor for me that they came from the e / k sector, for the first time I had the opportunity to meet with these brothers here, and a friend of ours here received two awards at the same time. This shows the following: When you behave without prejudice, when you see people without prejudice, when you move with art and culture, when you tear down the walls on our heads, you can put your signature under beautiful things ", said the Mayor of Maltepe .