103 years since the Pontian Genocide: "How can one cut the belly of a pregnant woman" 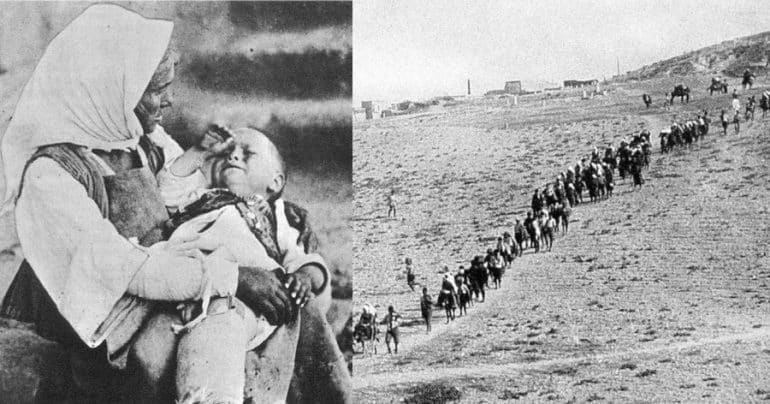 103 years since the Pontian Genocide…

On a day like today, May 19, 1919, Mustafa Kemal lands in Samsun to begin the second and most brutal phase of the Pontian Genocide.

May 19th is an important anniversary for Hellenism: Day of Remembrance of the Genocide of the Greeks of Pontus, as it was established in 1994 by a unanimous decision of the Greek Parliament. Until the Asia Minor Catastrophe of 1922, the Greeks who lost their lives were 350.000!

Most of the witnesses of the Genocide of the Greeks of Pontus and the violent change of human geography, have passed away. And yet, nothing can be forgotten. One generation succeeds another and pain, torment is passed from mouth to mouth.

Rosa, Elias and Maria are three young people with Pontian roots who carry bloody stories. They did not live in 1919, however they remember grandparents being told. They ache when they hear the pain their ancestors experienced. The new generation can not forget…

Today these three children share with FamagustaNews the stories told to them.

Η Rosa Karapetian lives today in Katerini and is of Armenian origin. She considers it a blessing to have this origin and feels indebted to her ancestors to honor their memory, to know and not to forget the history, to speak the language whether it is Armenian or the Pontic dialect and to continue the tradition.

"My father's Armenian great-grandfather, who was an aga of an area on the border of Kars with Georgia, was beheaded in front of his youngest of three sons. Unable to bear the sight of the inhuman and barbaric image, the little one lived a few more years but in a state of schizophrenia from the shock he suffered.

My mom's great-grandparents lived in a village near Trabzon. Seeing the prevailing conditions and the systematic uprooting of the Armenians, they realized that it would not be long before the blind nationalist and religious hatred of the Turks reached the Greeks of Pontus. So my mom's grandparents, along with some other families, decided to uproot themselves from their homeland and settle in a Christian country. Georgia was the place that hosted them. To this day, this village called Tsihinjvari is inhabited mainly by Pontians.

I remember when I was little, that in the beginning of 2000 when my grandmother and I went by bus from Greece to Georgia and then to Armenia, I did not want to get off the bus as we were crossing Turkey, I did not want to drink from the water them, their tea. XI still do not know who the Turks are. "Instinctively, a disgust came out of me, a commotion that I could not explain."

The answer to Rosa's 2000 question by her grandmother makes sense.

"Why do people live in houses that are so sloppy?"

-OThe residents who live in these know that they do not own them and that one day the real owners will allow it. "They do not bother to take care of them."

Η Maria Chromatidou lives today in Thessaloniki and we were told another side of the same story. That side that justifies the cool voices that claim they can live in harmony with their neighbors.

"My great-grandparents told my grandparents that despite the cruelty faced by the Pontians at the time, there were too many Turks who were friends or collaborators for years, and many of them risked their lives to secure the safe escape of the Greeks, or they hid them in their homes. "

With these words, Maria, as a calmer side of the story, today wants to praise the victims without this meaning that she wants the perpetuation of the hatred, as she characteristically says.

Really, can they? Rosa's words hide great indignation and it is difficult to leave the pain behind.

"When I asked why this happened, my father replied that jealousy, fanaticism and feelings of inferiority were the causes. Jealousy because Armenians and Greeks owned the largest percentage of trade and wealth, because they were educated, "literate" as my mom says. They had schools, churches. But mostly they were Christians, so unbelievers. By killing an unbeliever you gain a place in the non-existent paradise of their religion. How can one crucify pregnant women and cut their belly by slaughtering the baby? How can one fit so much evil and so much hatred into one's heart to remain blind to this day? They raped, looted, burned, killed, tortured, destroyed, slaughtered, and I did everything a man would be afraid to imagine…. 350.000 souls testified.

I remember asking the older ones about what happened and not wanting to talk. It still hurts them and they do not want to be reminded of those events. They may not want to but I am sure that not a day goes by that they do not think about it. And some took them with them to their graves. "

Ο Elias Karafoulidis who lives in Thessaloniki, snorts when he hears his grandfather's story.

"Like today, I remember the moment when my grandfather, Iraklis, told me about the difficulties he went through in Pontos, how he left Samsun, how he came to Giannitsa and then settled in Thessaloniki. A man without money, who was forced to come to Thessaloniki for a better tomorrow. Born in 1912, at the age of just 7, he lived through the Pontian Genocide. Every time he told me the stories from Pontus, he snorted. Many times he told me "I will never be able to forget the barbarities of the Turks, they burned churches, they killed women and children". In 1925 my grandfather was expelled from the Turks. From the age of 15 he started working in construction so that he could make a living. Vourkonas and I when he told me how his life changed overnight, and how with a lot of work he managed to create his own business from scratch in the center of Thessaloniki.

He passed away 10 years ago and I still remember his advice: “What this horror I experienced taught me is to appreciate the miracle of life. For this, my grandson, learn to appreciate the food you eat today and do not whine ".

Nothing can be forgotten and no one can forget! No, as long as the perpetrator impersonates Pontius Pilate and washes his hands for the hundreds of thousands of dead. But the same DNA that transmits pain from one generation to the next and awaits justification. The soil has a memory.

The Pontians march together, so that it can be heard loudly that they demand the justification of their ancestors. The international recognition of the Genocide of the Greeks of Pontus is a national affair and everyone must fight to achieve the highest goal.