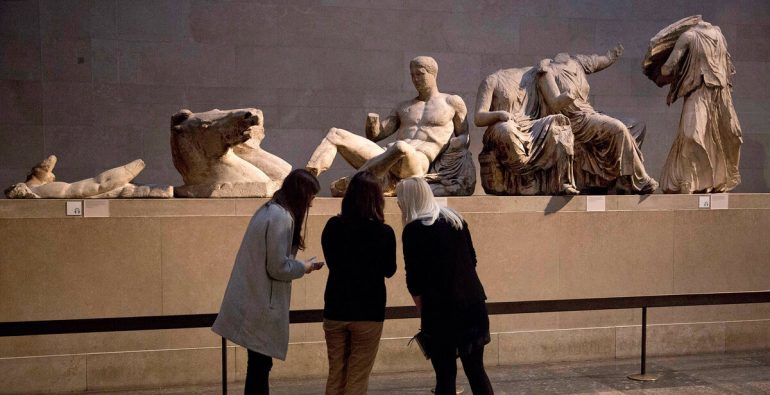 The open wound for our country's cultural heritage took a bad turn in June 2011, when the British Prime Minister himself made an insulting statement.

"Neither money nor marbles," he said characteristically David Cameron, conveying in every direction its double message: Britain does not intend to contribute to the rescue program of Greece and, at the same time, not to return the marbles of the Parthenon.

Cameron referred to the so-called "Elgin Marbles, Which are in the British Museum, clarifying that there is no question of their return to Greece.

"Britain is not losing its marbles," he said abruptly in an appeal by an opposition lawmaker to return the Parthenon sculptures to their rightful owners, and finally restore an injustice that has lasted for two whole centuries.

Even worse for the Greek claim, in December 2014 the British Museum lent one of the elgin to the Hermitage of Russia. It was the first time that Parthenon marble came out of the British and the move was considered highly symbolic of who the master of the sculptures was.

The move naturally angered Greece, which once again demanded that the sculptures be reunited in their natural space. In the aftermath of the incident, a movement was organized inside Britain with some MPs demanding the return of his Marbles Parthenon.

This time their statement fell like lightning: "They have been stolen by the Greek people", they said characteristically, speaking of shame on the part of Britain.

"It is a fact that the parade of stolen loot from the otherwise excellent British Museum is something I think is a shame for this country. "Certainly the United Kingdom now needs to participate constructively, to act generously and to recognize that the Parthenon Sculptures must return to Athens."

This was stated in the British Parliament by the Liberal Democrat MP, George Andrew, while submitting a memorandum to the British Ministry of Culture.

"There are very strong feelings about this issue in Greece. "Most likely, our relations with Greece will improve if we constructively adopt the position of returning some, if not all, of the objects", the then Labor MP hastened to subscribe Jeremy Corbin.

At one point, Undersecretary of Culture Ellen Grant responded, saying, "We will consider this proposal and respond in due course. I will repeat that the sculptures legally belong to the British Museum, to which everyone has access and even for free ".

And the issue closed there…

The most promising glimpse of the return of the Elgin took place in July 2016. Members of the British Parliament, from various parties, are proposing to return the marbles home.

According to the "Independent" report, the deputies brought an amendment that would pave the way for the repatriation of the Parthenon sculptures exactly 200 years after their purchase by the British government.

The cross-party consensus was a particularly joyful event for the Greek claim. The deputies demonically linked the issue of return with the referendum on Brexit which had just taken place (June 2016), stressing that such a restraint move could provide Britain with better negotiating conditions for leaving the European Union.

"The union of the sculptures kept in London with those still in Athens could be a diplomatic coup for the United Kingdom while Brexit is being negotiated," they said.

The deputies acknowledged that it was time to end this battle between the British government and the British Museum, on the one hand, and Greece and the international support movement, on the other.

Thomas Bruce, 7th Lord of Elgin, removed between 1801-1805 almost half of the sculptures who had survived for 2.500 years on the Parthenon and the Acropolis.

Britain's ambassador to the Ottoman Empire has long claimed that he had permission from the High Gate to send the sculptures to Britain, although the alleged firm designating it was never found.

In any case, the British Parliament officially bought them on July 11, 1816 and donated them to the British Museum, which has since claimed that Elgin took them with permission. Let us keep here, however, that when the English say for 200 years since the purchase of the Elgin, they simply mean their purchase by Elgin.

The Parthenon Sculptures Bill was presented to Parliament on the 200th anniversary of its Liberal Democrat Mark Williams acquisition, backed by Jeremy Lefroy of the Conservatives and 10 other MEPs. Labor Party, the Scottish National Party (SNP) and Plaid Camry (Wales).

"This bill proposes that the Parliament should annul what it did 200 years ago. "The Parliament ratified in 1816 the illegal occupation of these impressive and important sculptures by Greece", said Williams, "it is time to indulge in a generous act. To correct a mistake of 200 years ".

As George said, the issue is so important to the Greeks that they even went so far as to give bullets to the Turks besieged on the Acropolis during the war of 1821, so as not to destroy the Parthenon to make bullets from the lead of the joints.

The deputies even pointed out the many polls that have been conducted all these years in Britain, where the change of feelings is certified. The majority of the world is now in favor of the reunification of sculptures.

The moment was particularly favorable, as the British press (such as the Independent and the Observer) observed, and George repeated: "If we are to negotiate a decent exit agreement with our European friends, the last thing we want to do is to show them the kind of disrespect shown by Farage in the European Parliament ".

The Elginians were linked at a historical juncture to the fate of England itself and were even considered a bargaining chip by a section of its political world.

And certainly an act of restraint towards a European country, to be noted in the tough negotiations that everyone knew would follow.

"It would be in Britain's interest to show that we are leaving European Union "It does not mean that we become introverted and xenophobic towards the Union, but more confident, with a greater ability to show kindness", George noted characteristically.

"And no better demonstration of this generosity and generosity could be found than doing what is right for the Greeks," he concluded.

The move was hailed by international circles and everyone saw the reunion of the Parthenon sculptures as a world-wide act.

And then he intervened British museum. After saying in every direction that "we tell the story of the cultural achievements of the whole world, from the beginnings of human history 2 million years ago to the present day", he went on to the motto:

"The sculptures of the Parthenon are an integral part of this interconnected world collection. It is part of the common heritage of the world and goes beyond political boundaries. "

But he did not stay there: "The Acropolis Museum allows the sculptures of the Parthenon located in Athens (about half of what has survived since antiquity) to be appreciated in the background of ancient Greek and Athenian history. The sculptures of the Parthenon in London are an important representation of the ancient Athenian civilization in the context of world history ".

But he also said something else, in the same press release. How of the 65% of the Parthenon sculptures that survive to this day, 30% is in Acropolis Museum and the other 30% in the British.

The other 40% (of the surviving sculptures) are scattered in museums in Europe, from the Vatican and the Louvre to Copenhagen, Vienna, Munich and Würzburg. Letting it be understood that the fact that no Greek efforts are made to return the antiquities of the Parthenon from these museums is important.

England in the years of Cameron was strongly opposed to the possibility of the return of the Elgin to Athens. 2016 may have been a time when feelings had changed a lot but again the return was left to the pious desires of some.

The "Observer" remembered 2016 and the efforts of Melina Mercouri since 1983, when he bravely opened this discussion that some people want to close once and for all.

As the "Guardian" noted in November 2015, when the momentum of the return was gaining more and more ground:

"For anyone who has even a liberal bone in their body, a walk in the British Museum is an uncomfortable experience. The Marbles of the Parthenon and the Rosette column are the only known examples of miracles obtained from looting. "

The dismemberment of a 2.500-year-old monument is an issue that many Britons cannot digest.