The story of Mr. Giannis - He left forgotten by his children who lived in neighboring houses bought with his money

"Mr. Giannis had two sons, who lived a few blocks below, in adjacent penthouse apartments, which he had bought for them with the savings, a loan, and his lump sum. But both of them let him live alone and forgotten by everyone " 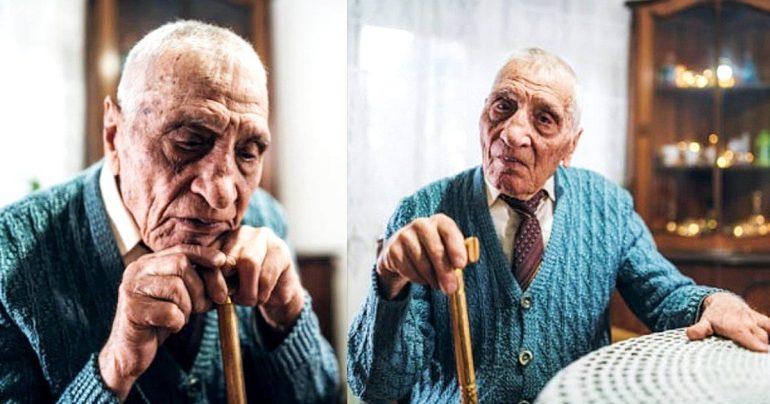 Η moving story of Mr. John is one of the many cases of seniors spending Christmas alone, as they have lost their partner and their children forget them.

Mr. John, as he did every day, so today he woke up early and went straight to the diary, dragging his slippers to the floor, peeling off a piece of paper, revealing what he had written December 25…

He went to the bathroom, dragging his slippers again, poured plenty of water on his face, combed his hair and made a bar of soap by brushing it on his white beard, grabbed the blade and shaved off, putting plenty of lemon cologne at the end. "With your health, Giannis". Monologue again.

He went into the kitchen, dragging his slippers, and baked a heavy dessert with cream in a thick cup, as he always did, took a deep breath of coffee and lit his first cigarette.

"Get up, Giannis, why are you sitting? Christmas it's, today you have to wear your goodies ". He said to himself and headed for the bedroom, ostentatiously dragging his slippers. It was a habit he had acquired as he lost his wife and then, Mrs. Tassoula, from that old-illness, as Mr. John said cancer, and you dare say he did it to exorcise the funeral silence that now prevailed in home, break the slippers boredom.

So he put on his good suit, his expensive patent leather shoes, tied his wide red tie and like a proper nobleman, sat in his comfortable armchair, turning on the TV. "Nothing has this stupid box again, fortunately today is Christmas and wherever it is, my children will come to pick me up, to celebrate with my grandchildren." He said and his face lit up with joy.

Kyr Giannis had two sons, Levantes and well-married, who lived a few blocks down, in the same apartment building, both, in adjacent penthouse apartments, which he had bought for them with the savings, a loan, and his lump sum.

He looked at his roles. "Mom, when the hour went, it was noon, most likely my lads will have a job, and they will come and pick me up in the evening." Mr. John murmured and changed the channel, remaining helpless in his chair.

The moving story of an elderly man about a lonely Christmas

The afternoon came and it started to get dark slowly, Mr. John looked out of the window of his ground floor house. "Damn it, you say the phone broke and the children could not find me, and I was worried about my pride every year?" He said and picked up the phone and put it in his ear… "Tut, tut, tut, weird, the phone works fine". He said and lit another cigarette.

And so, slowly and painfully, it went ten o'clock at night, but the phone never rang, nor did Mr. John's door open today. "My leventes would definitely get involved somewhere, let me not bother them. Come on, find Giannis, put on your pajamas and slippers, and go to dry in your bed, the day is over, but next year, it can't be, Christmas will be better than this year ". So Mr. John thought aloud and a sigh came out of him, and a tear flowed from his eyes. He turned off the TV, the lights, and went into the bedroom, took off his suit, put on his pajamas and, dragging his slippers, pushed himself under the cold blankets in silence.

The next morning, Mr. John's phone started ringing persistently, it was his eldest son, who had been calling him for some time. But, Mr. Giannis did not answer, he was missing! Only his lifeless body, betrayed by his broken heart, was there, covered in warm blankets. His soul had left in the evening, just before midnight, to go and meet that of his good Tassoula!

“I came, my lady! I came so that you would no longer be your nun, I came to do it together Christmas”. Said Mr. John, and without dragging his slippers anymore, he went and hugged her, kissing Tassoula tenderly on her forehead.