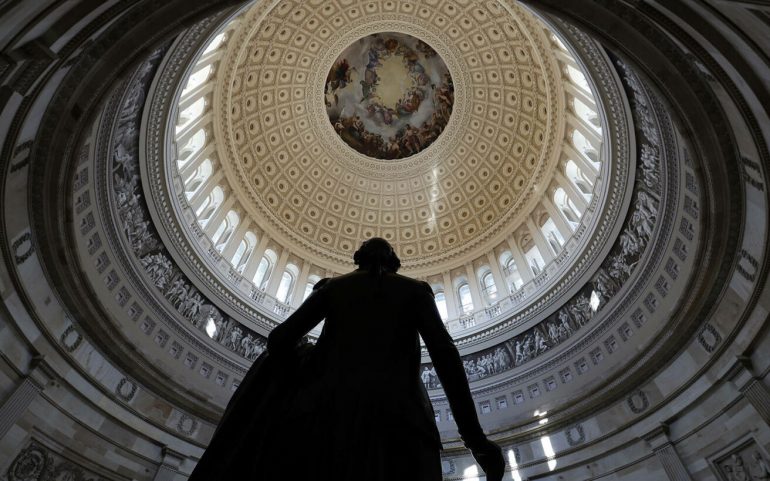 When a few days ago outgoing far-right hordes of US President Donald Trump storm inside Capitol building in Washington, few noticed how beautiful the murals that adorn it and how imposing are the paintings hanging on its walls.

Will someone say, and rightly so, that it is "possible in such critical moments to look at the murals of a building"? Right. Ugliness, after all, even for a while always overshadows the beauty. Beauty, however, is what always wins in the end…

So when the far-right hordes left the building, the authorities ran to find out the condition of the works of art that adorn the Capitol. And they are not just works of art. Nor is the person who created most of them simple or random.

It is the so-called and "Michelangelo of Washington "! He is a Greek. Born in Italy, of course, but originally from Filiatra. Konstantinos Broumidis. The man who turned the walls of the Capitol into a huge canvas and spread his undoubted talent there.

A rare artist who was adored and continues to be adored even by its presidents USA for his work. But he also followed the fate of most great artists. He died poor and alone… The recognition we are talking about today came many years later. 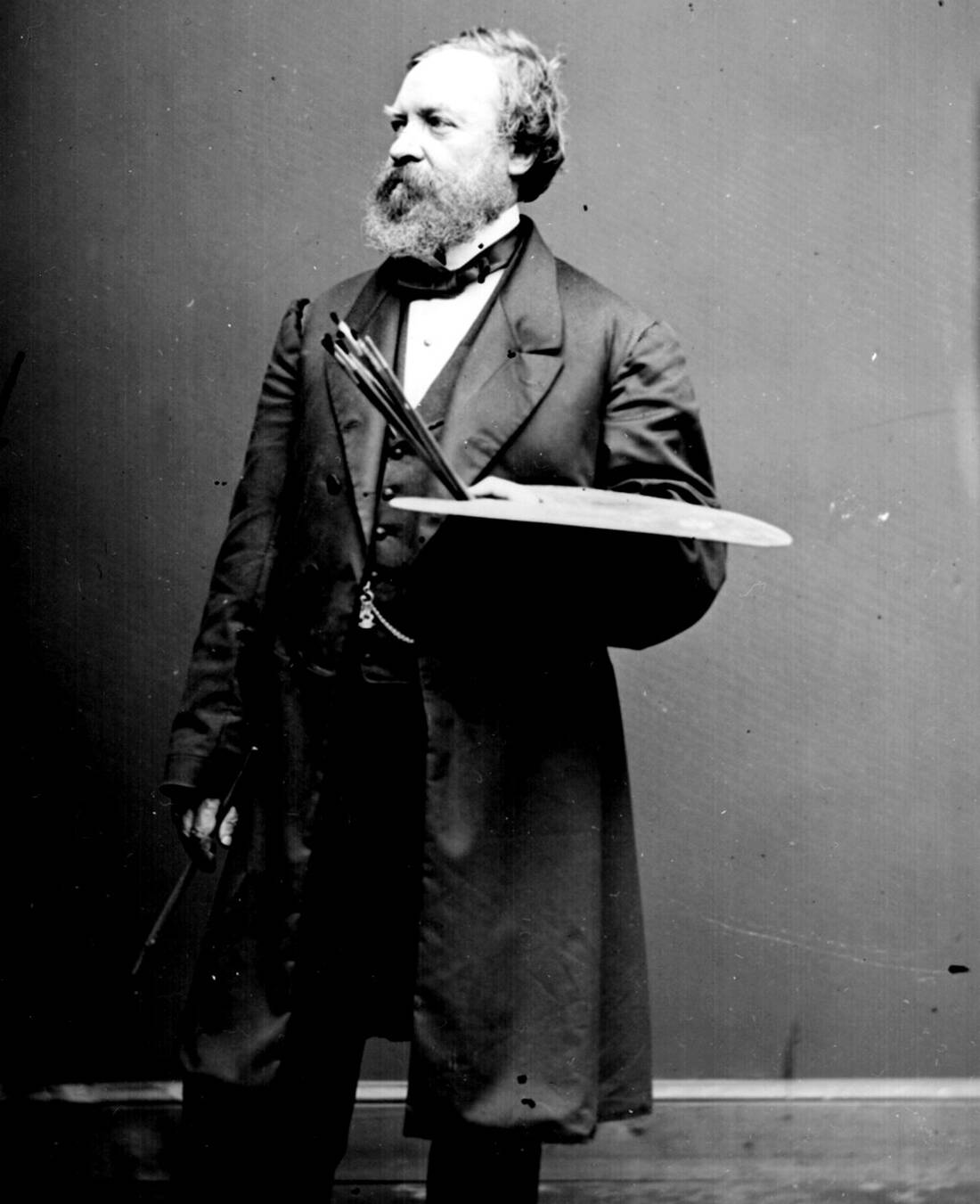 On July 26, 1805 at Rome little Constantine is born. He is a child of Stavros Broumidis from Filiatra Messinia and Italy's Anna Biancini. Stavros Broumidis was forced to leave Greece during the Orlofika (one of the uprisings of the enslaved Greeks in the Peloponnese, before the great Revolution of 1821, which was so named because it was designed by the brothers Alexios and Theodoros Orloff).

He settled in Italy and there he met his later wife.

Little Konstantinos showed from a young age his tendency towards the arts. His parents immediately recognized his rare talent, and so, at the age of just 13, they enrolled him in the Academy of Fine Arts of St. Luke in Rome.

Konstantinos began to study alongside the best, attended art classes in many museums and worked with great sculptors such as Antonio Kanova and Bertel Thorvaldsen.

What attracted him from the beginning was the mural and there he threw the great weight of his education. 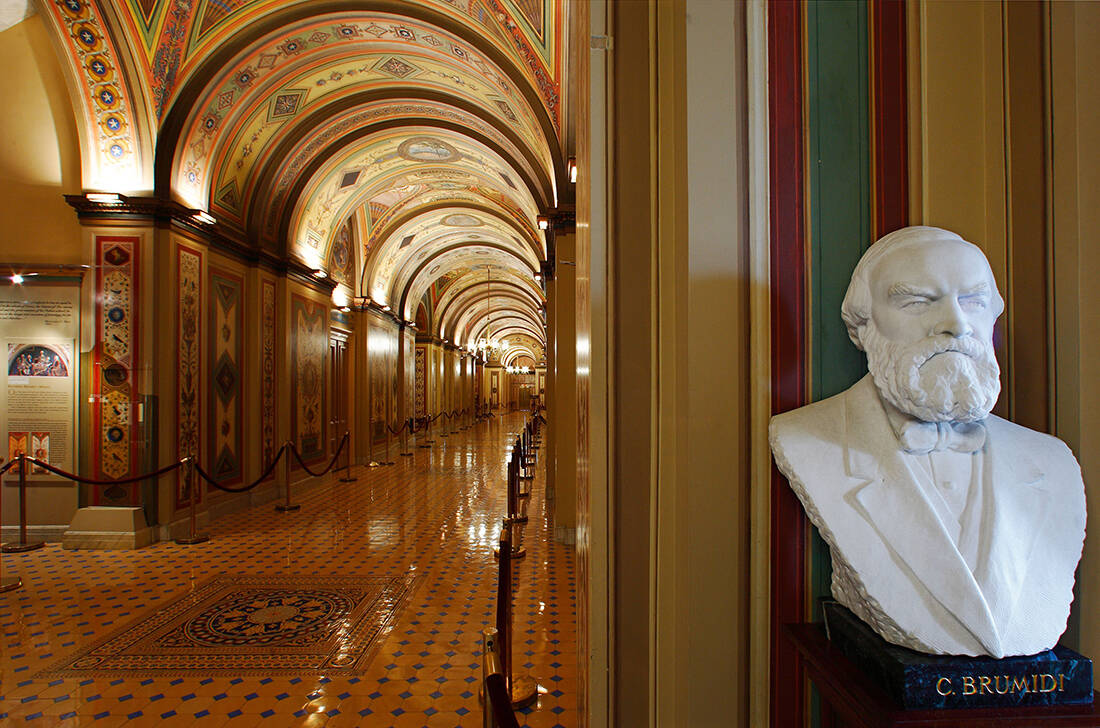 The reward for his efforts came relatively quickly when, together with other artists, he undertook the maintenance and restoration of Raphael's frescoes in Vatican! In addition, he undertook the painting decoration in various palaces while he was the one who painted the portrait of Pope Pius IX!

The future was bright in the Italian capital for Broumidis, however, the unrest that broke out after the French invasion in 1849, "sent" him to the other side of the Atlantic. After a short passage from Mexico he ended up in the USA, where, in fact, in 1852 he also acquired American citizenship.

In the USA he started working painting churches but soon his fame grew and so quickly came the proposal for his most important work. 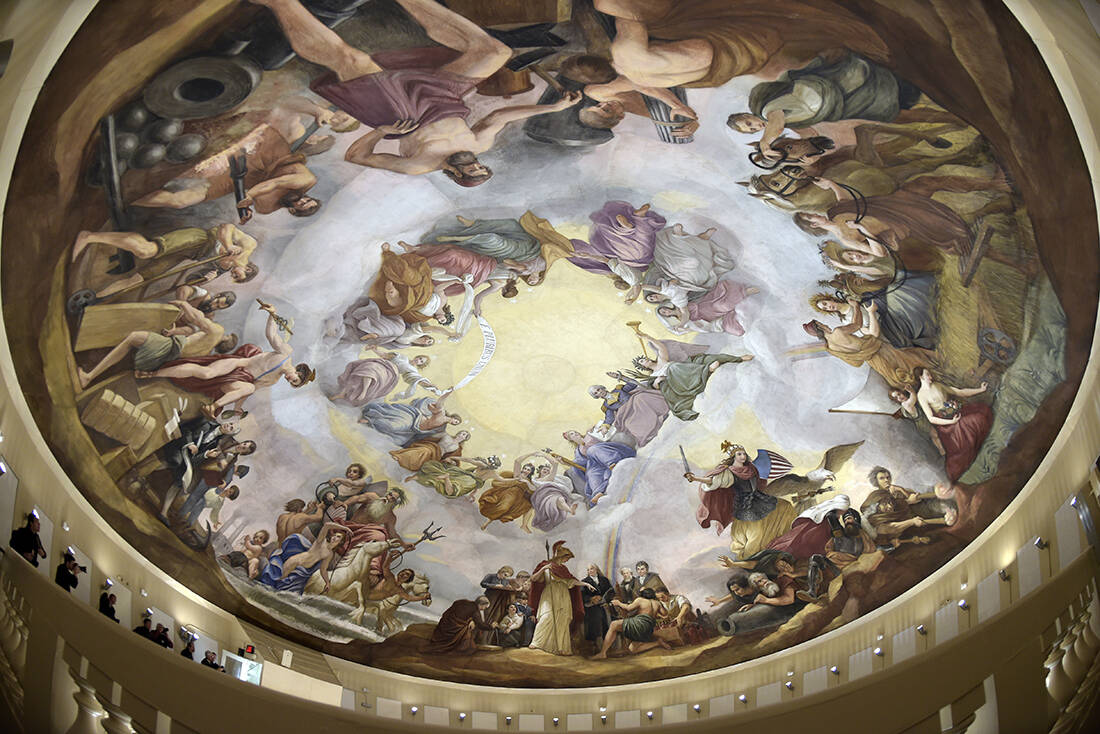 When Broumidis' work began to be recognized in the US capital, he was invited to create small murals in some small rooms of the Capitol. He was paid $ 10 a day at the time…

His first artistic impressions on the walls of the Capitol, however, did not leave the slightest room for misinterpretation. The reviews were impressive and Broumidis quickly "came out" of the small rooms and went to the big corridors and the huge halls.

He was hired as an official painter by the US government and thus took over the murals throughout the Capitol! He worked there for a total of 25 years and covered a total area of ​​1.500 square meters with his murals!

Every great one artist, however, it also has a work that is its hallmark. The most recognizable. In the case of Broumidis, this work is the painting that adorns the dome of the Capitol. This is what gave him the title of "Michael Angelos of the USA". 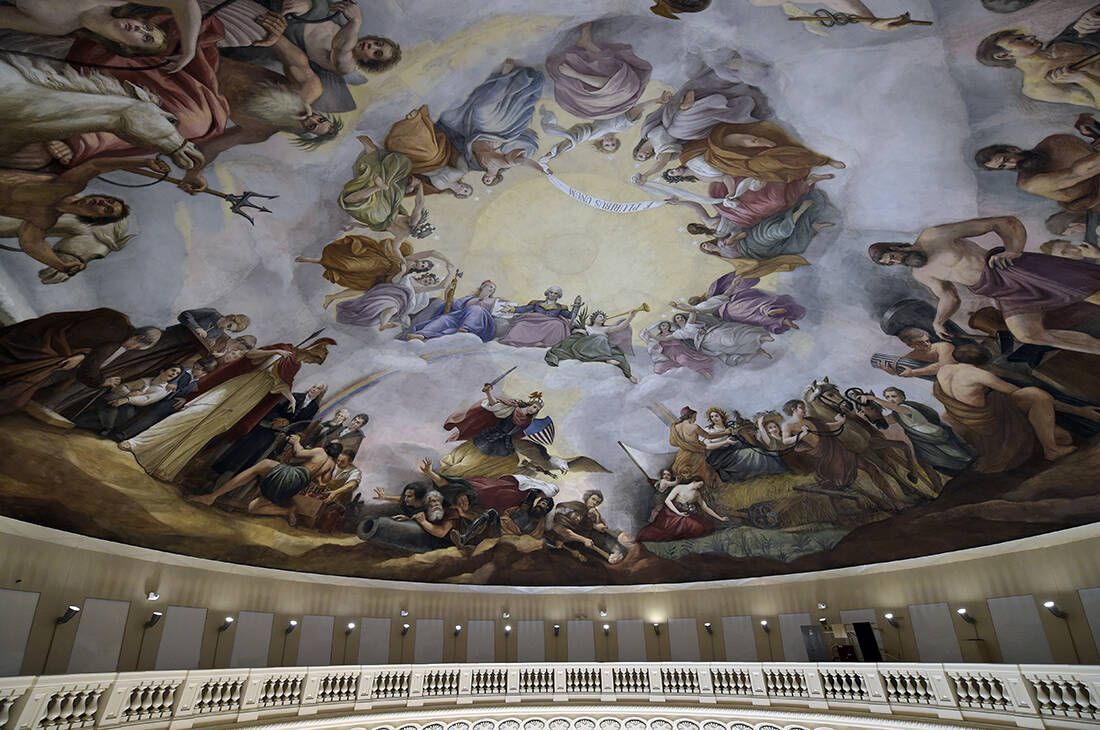 Obviously influenced by the romantic trends of his time but also by the Renaissance and painters such as Rafael and Michael Angelos Broumidis magnified with his colors and style.

For just over a year he painted on huge scaffolding set up under the canopy.

When the project was completed he left everyone with their mouths open. Such was the ecstasy that caused those who saw it for the first time that this particular project (for which Broumidis was paid $ 40.000) was called "the apotheosis of Washington»! 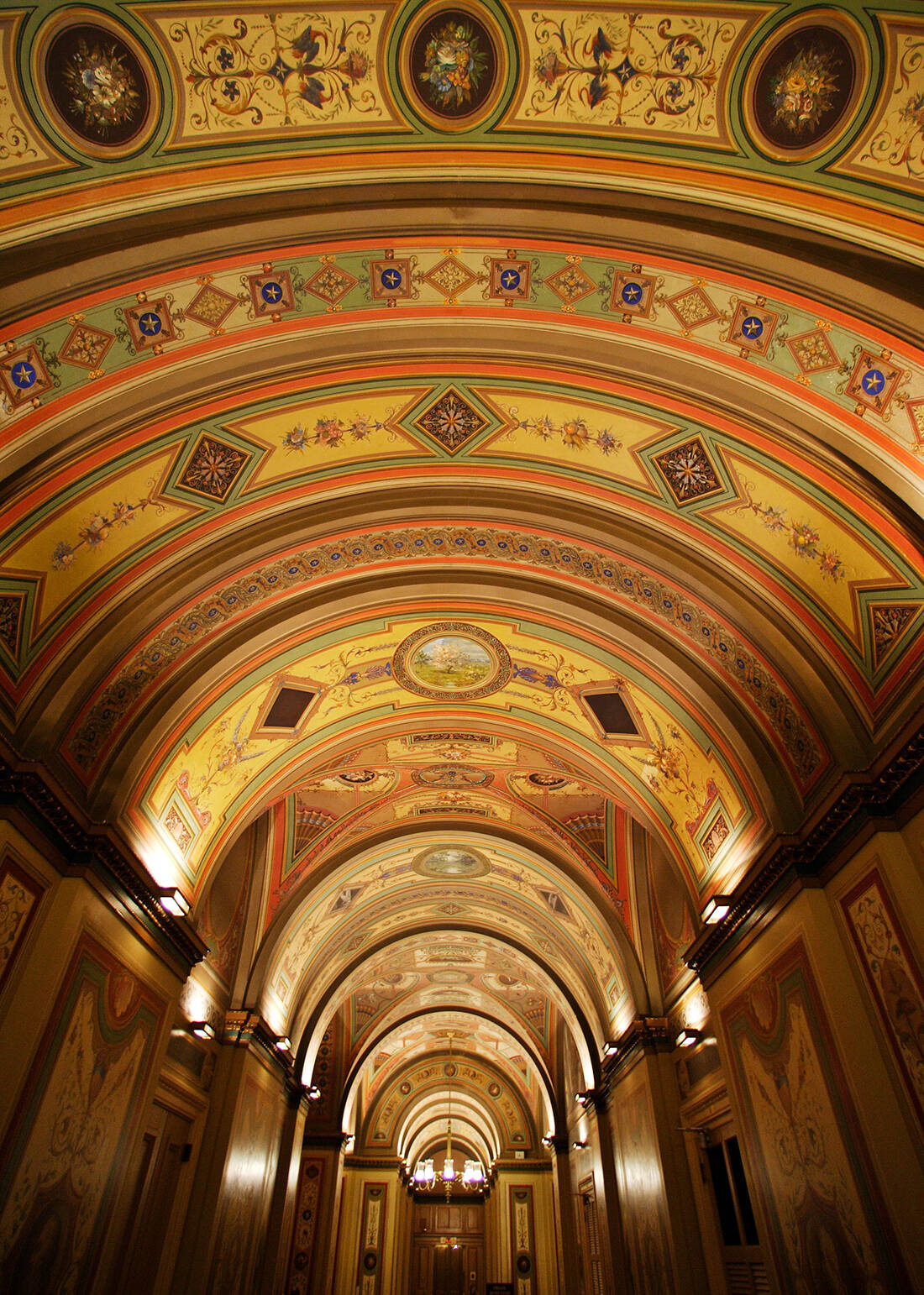 Konstantinos Broumidis died in Washington on February 19, 1880, at the age of 74. Until just 24 hours before he left his last breath he continued to work and leave his magical touches on his walls Capitol.

Despite his devotion, however, Broumidis died virtually alone and poor. The only reference at that time to his death was made by Senator Daniel Vourchis, who in a speech at the Capitol, among other things, said of Broumidis: "He died poor, without even enough money to bury the weakened his body and yet how rich a legacy he left to the present and future generations. "Almost a quarter of a century passed between these walls, from the basement to the dome, leaving creations of immortal beauty, wherever his hand rested."

In fact, even the tomb of Broumidis, for many decades was considered lost. No one really cared about the man who decorated the "Temple of Democracy" in the United States with his art and talent.

It had to be in 1952, that is, more than 70 years had passed for someone to deal with Broumidis and bring to the surface the artist behind the great work.

And do not imagine that a politician did it. No. A tour guide at the Capitol building did it. Myrtle Murdoch searched and found all the information she needed to write the biography of the great Greek painter.

This is how his grave was discovered in Glenwood Cemetery, Washington. A simple tomb. It would be difficult for anyone to notice him. He wrote his name and his "status" on it: "Italian refugee".

Then things changed and order was restored. His contribution was recognized by a law passed by Congress and signed by the then US President George W. Bush Jr. on September 1, 2008. He was posthumously awarded the Congressional Gold Medal. A bust of him was erected inside the Capitol, and his name was honored in one of the largest corridors of the imposing building in Washington.

See videos and photos from the work of K. Broumidis at the Capitol: 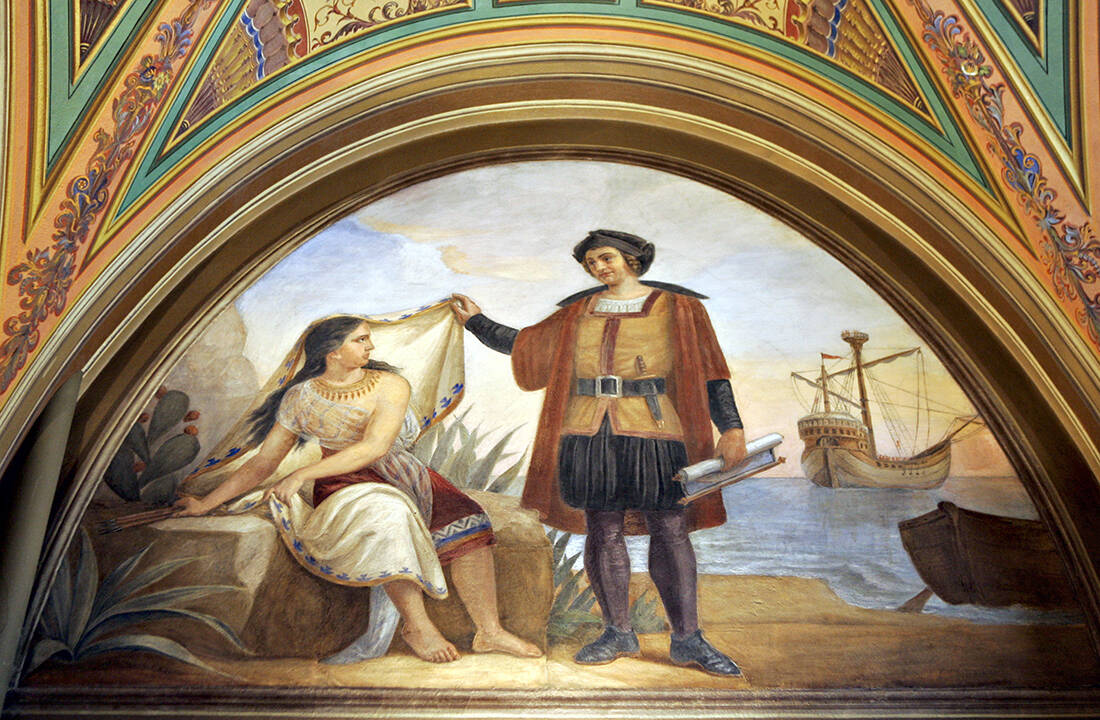