The men's ring and its various symbolisms

The rich semiology, the adventurous history and the heavy legacy for today 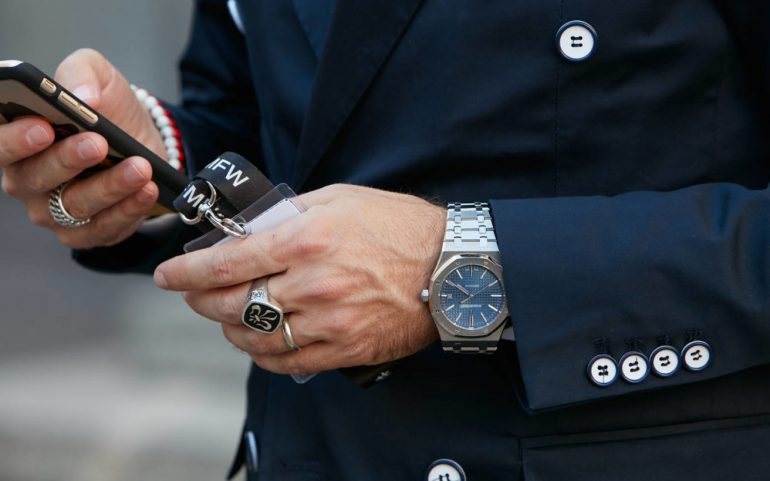 The men decorated their fingers with precious trinkets from very early in the course of history.

Later things were simplified and rings were no longer worn only by the nobles and kings, but even by the rebellious youth. Or the members of unions, those who joined dark clubs, even the graduates of big universities.

And so the men's ring came to have an extremely multifaceted and exuberant semantics, as a accessory which sometimes means something and sometimes τίποτα absolutely nothing.

And while for some it remains loaded with symbolism and legends, narrating even beliefs of times that have passed irrevocably, nowadays a leveling freedom has prevailed that no longer defies such meanings. 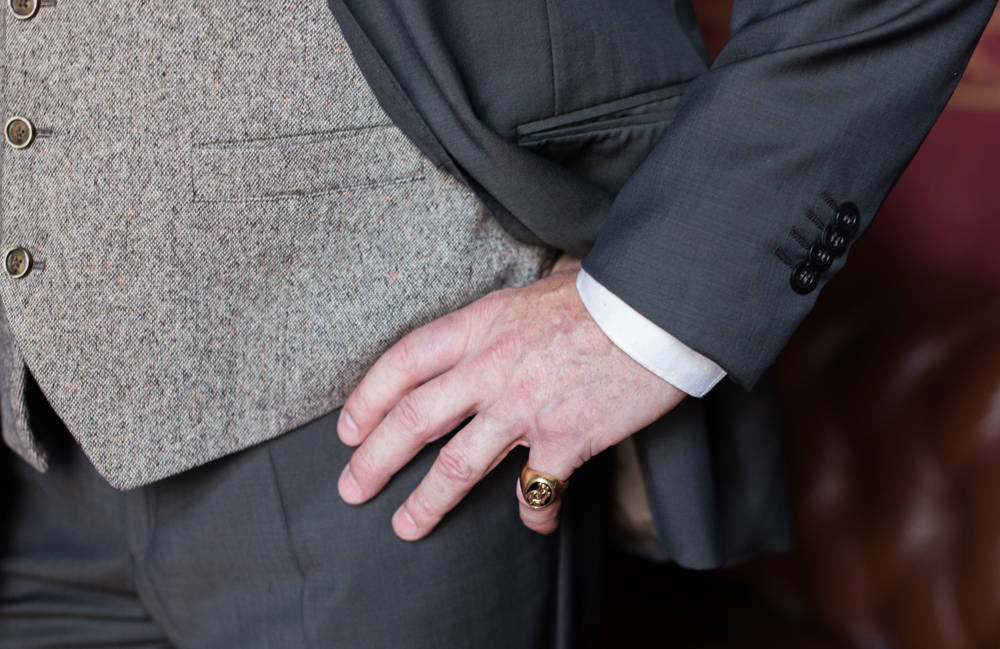 Today the man who wants to put a ring wherever he wants and finally. There are neither inviolable rules nor stylistic requirements that impose laws from the past.

But there are some traditions which continue to be observed by the mystics of the genre, as trends that have been inherited from generation to generation and survive to this day. Although for most their traces are lost in the depths of the centuries.

Rings also continue to send messages to a large number of recipients at a time. You see the simplest of these in your midst and it is conveyed by the wedding ring, which shows the man's commitment to monogamy and family life.

Only in the end, the more you immerse yourself in the history of the men's ring, the more you understand that even the simplest things can be a bit more complicated…

The semiology of the male ring 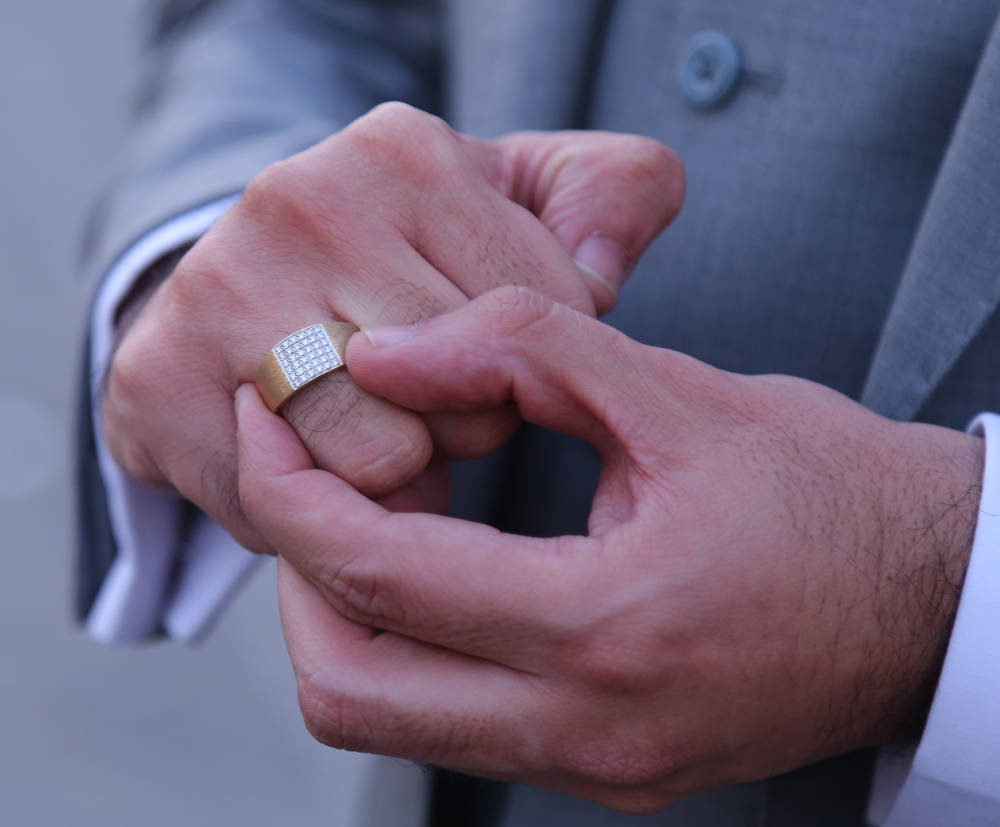 The ring on the man's hand has always been a sign of superiority, it bore on him the social status of the man who wore it. And when it was worn by the Roman emperor or the patrician of his court, it goes without saying that the plebeian could not put it in his hand. Not gold at least.

And so manhood has walked for centuries and centuries is the truth until the sweeping phenomena of the 20th century come to eradicate this long tradition. The musical avant-garde and the social revolution of morals there in the 60s and 70s deprived the ring of its rich semantic tradition.

Now the rock stars wore it on every finger and some "androgynous" personas David Bowie they showed everyone that the ring was just another accessory. The same for women and men. 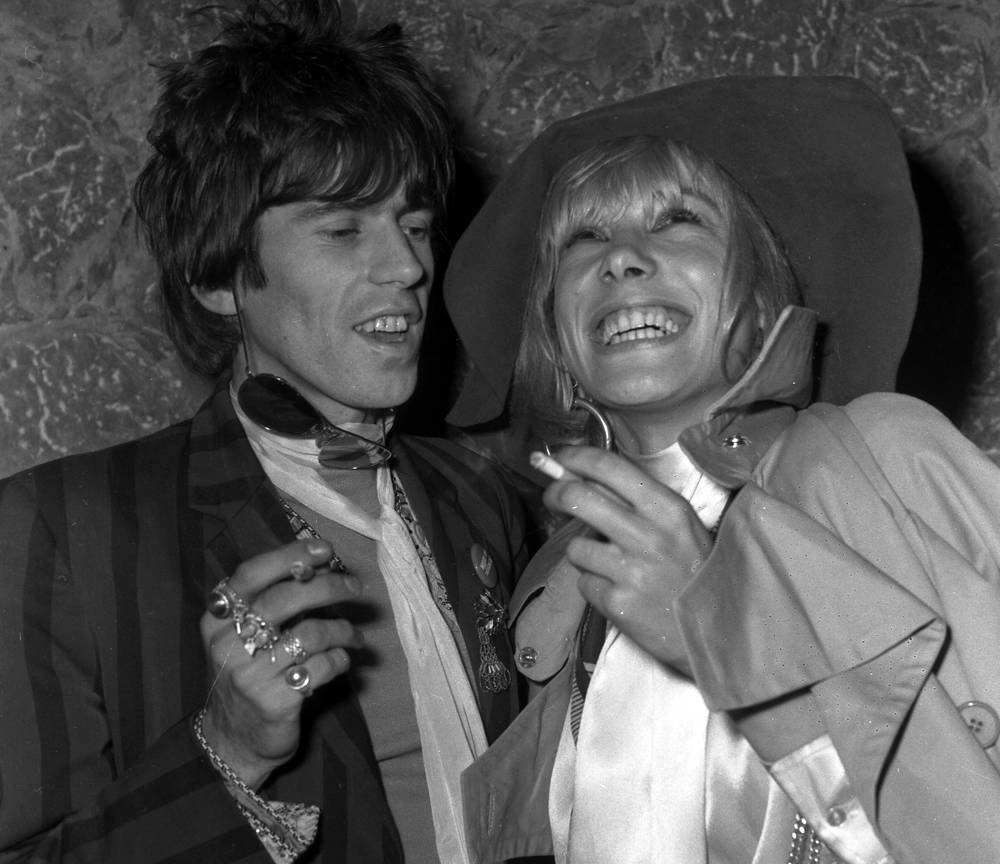 The ring was now an aesthetic extravaganza, even a sign of liberation from the suffocating frames of propriety. That is, how far from the times when the ring was a bearer of tradition, a symbol and an amulet at the same time, a trace of distinction and an oath of allegiance to an ideal. Or a testimony of friendship and commitment.

Nowadays you will hear the style experts tell you that the ring is the most masculine of men's accessories, the main lever for a complete and trendy image. It is often called "stylistic wild" which "takes off the male charm".

And somewhere there you hear the old gentleman insist that the ring remains a carrier of message and meaning, no matter what our modern times say. Otherwise, because we continue to wear wedding rings in the middle?

If it is to believe the old rule that still survives in some circles around us, here is what the youth should know about the male ring and its heavy heritage… 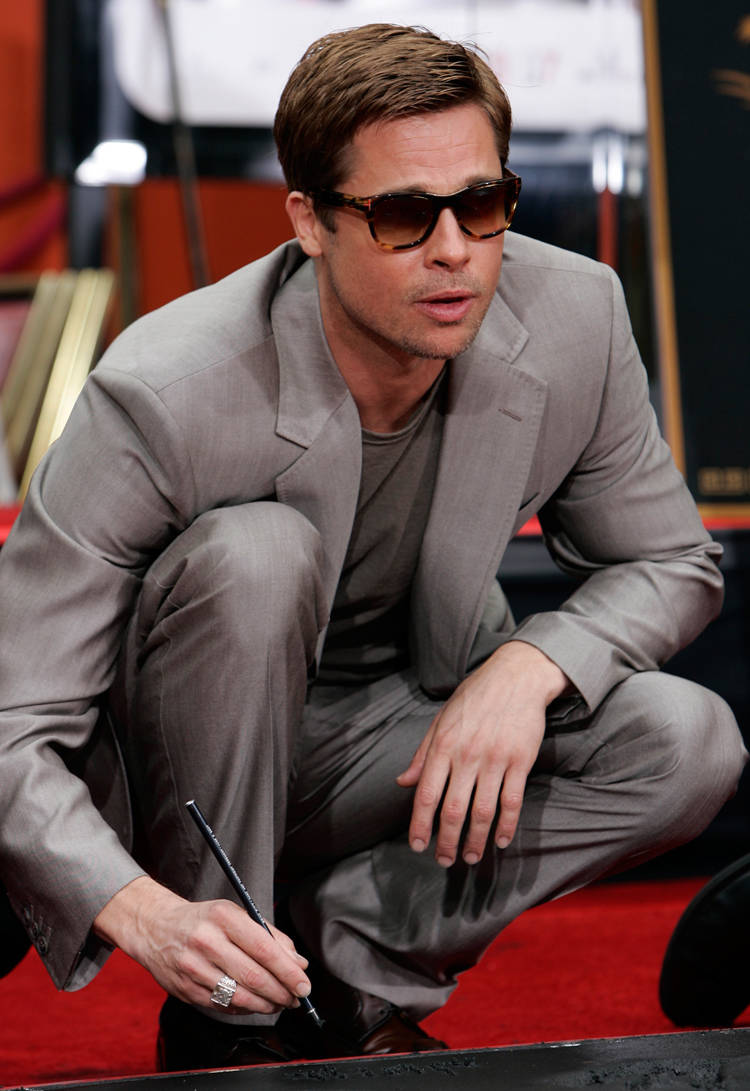 You will not find a rule here that indicates what and how, as most of the dilemmas have to do with specific cultural traditions or closed clubs that have their own regulations anyway. The wedding ring, let's say, is worn by Orthodox Christians on the right middle, while the catholics on the left.

Of course, there is no symbolism here either. Alas. The right hand is the "natural" hand, the hand of the handshake, the hand of action, the dominant. Thus leaving on the left qualities "conceivable", as the hand that represents our soul, that is, our character and our whole personality. 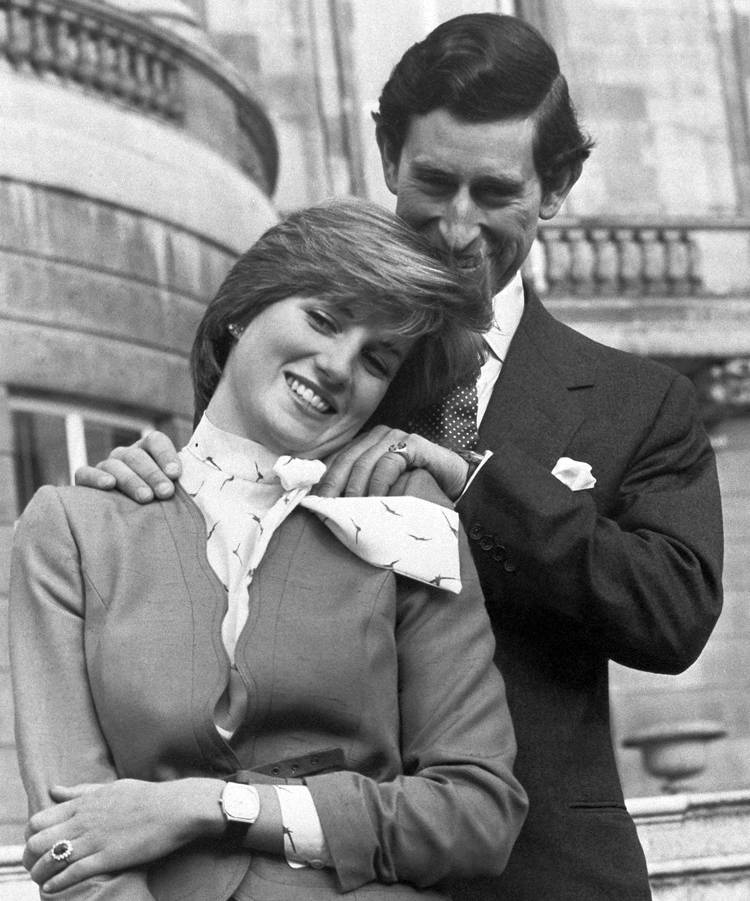 The little finger has historically been chosen by kings, aristocrats, the rich and important personalities. The so-called signet ring (ring-seal) was, after all, the one with which they "signed" the seal wax on the envelope or the decrees and wore it in the small and rarely in the index finger.

Chevalier was called it in those years and was a privilege exclusively of nobles and high officials, usually depicting the coat of arms of their dynasty. Later, Italian mobsters came to the United States to establish it as a sign of a place in organized crime. Or so he told us Hollywood. 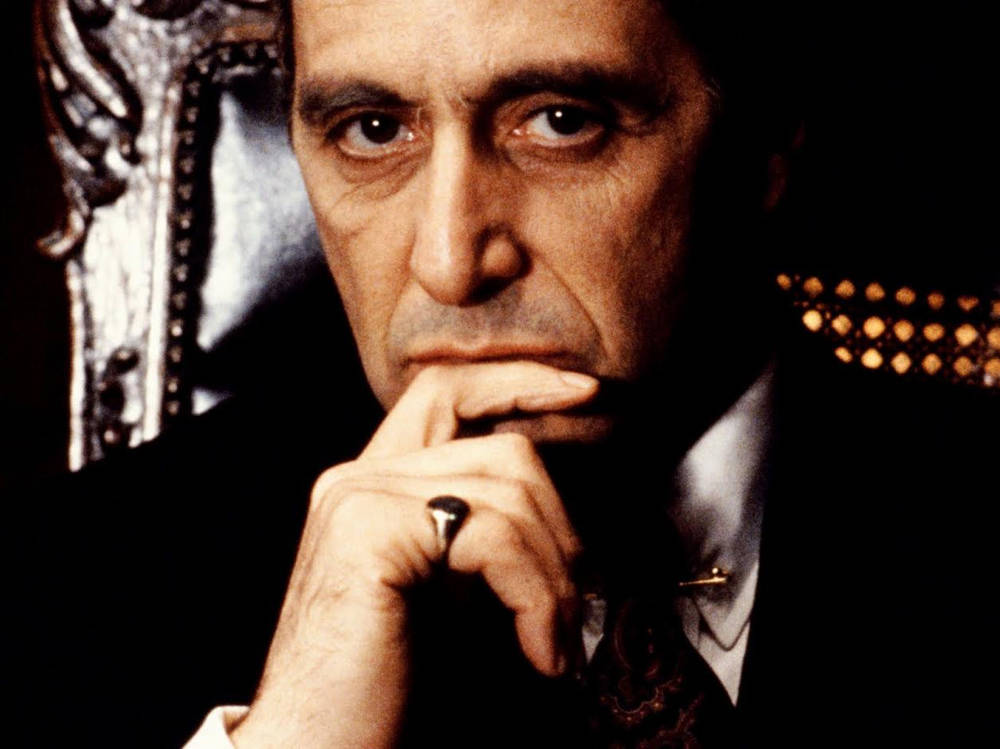 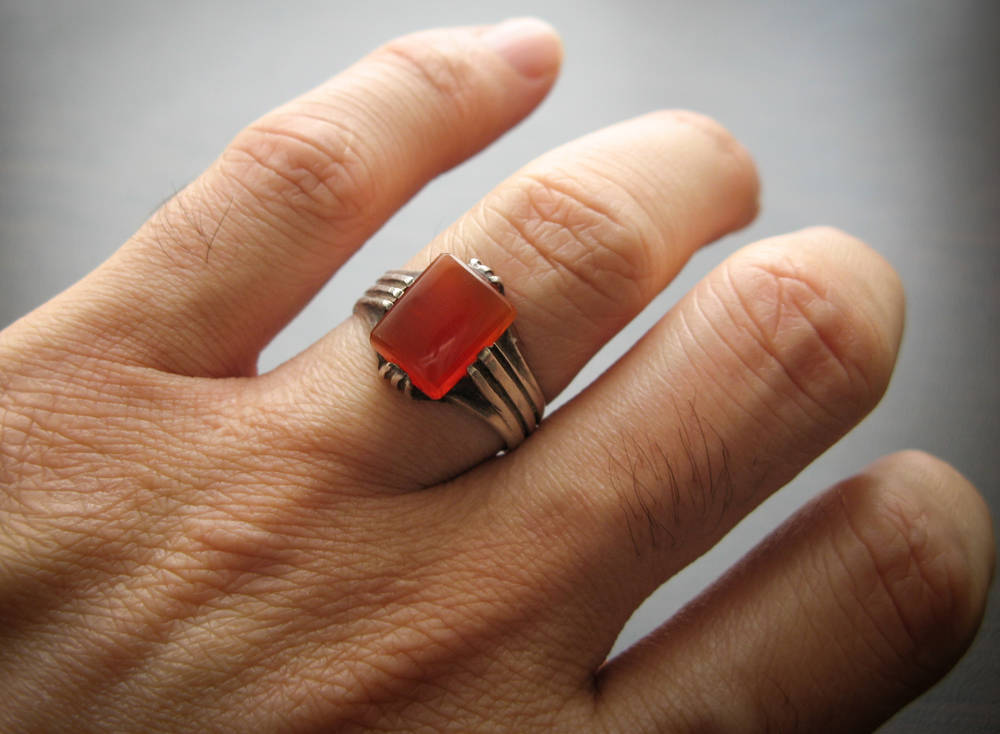 However, if you remain an incurably romantic soul, you can well wear it in the middle of the left, faithful to the meanings of "vena amoris", the vein that the ancient Egyptian legend wanted to start from the heart and end there. The wedding ring on the left served as a direct connection, symbolizing the eternal bond with the other half.

Not that you can not put another ring in the middle, everything else… 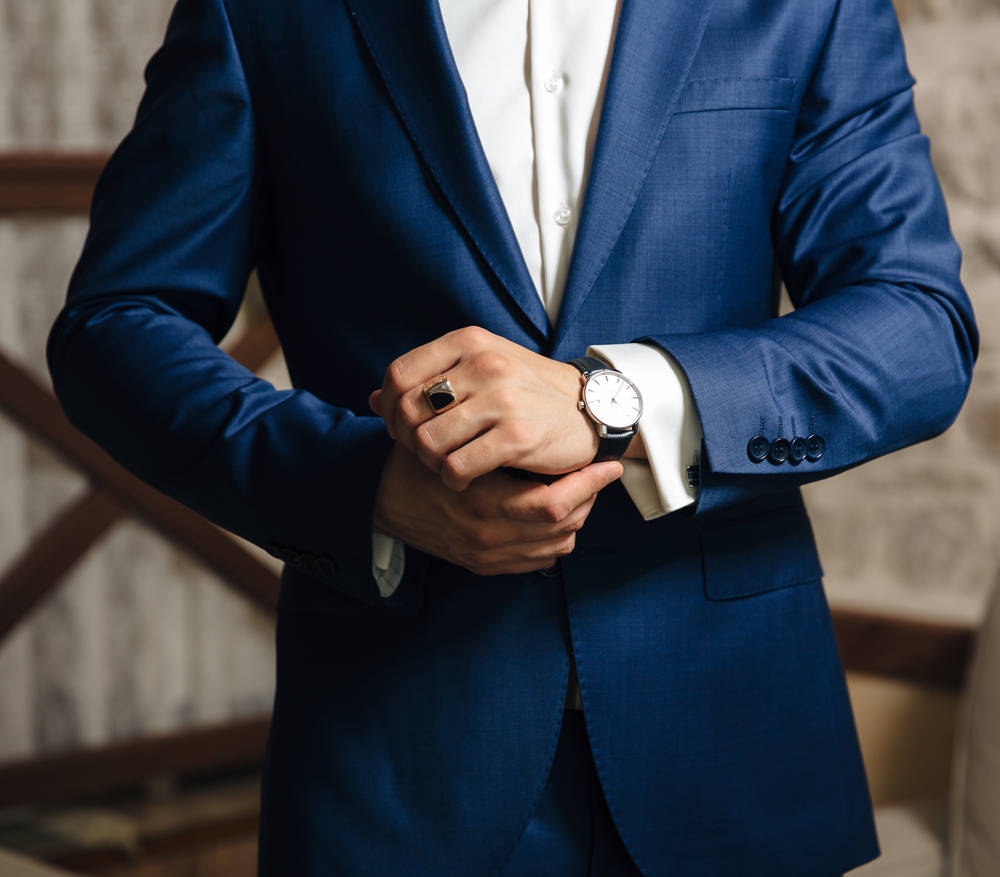 It is the finger that is completely free of meaning and semiology. Nobody historically wore their ring there, so it is an unwritten painting. Usually those who dare, adorn the middle finger with an unusual or eccentric ring, as a statement of masculinity and self-confidence.

The only rule is practicality. A bulky ring on the middle finger blocks the movements of the index and middle fingers. The middle one is even suggested by connoisseurs for the beginner, precisely because it is not connected to anything, and thus will not create any uncomfortable misunderstanding. 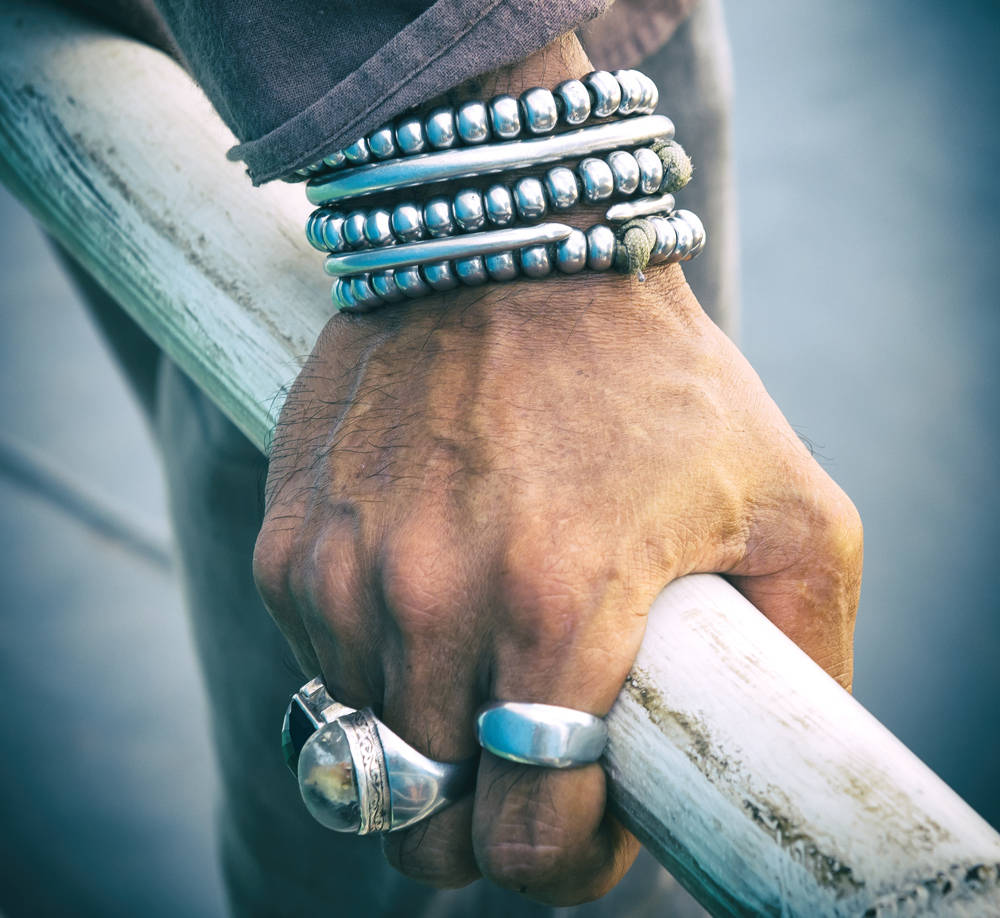 They say that nothing looks nicer in a man's hand than a signet ring on the index finger. The index finger is a particularly important finger in everyday life, from manual work to pointing. This is why most people instinctively leave it without a ring, as we use it more than any other finger together with the thumb.

Now the connotations with titles of nobility and high socio-economic positions have disappeared, so the index remains free for stylistic exploitation. You will find people insisting, however, that the index finger is the only finger for rings of high symbolism, such as class and social status or fraternity.

In fact, if there is a family heirloom ring, it is the perfect place to wear it on the index finger. 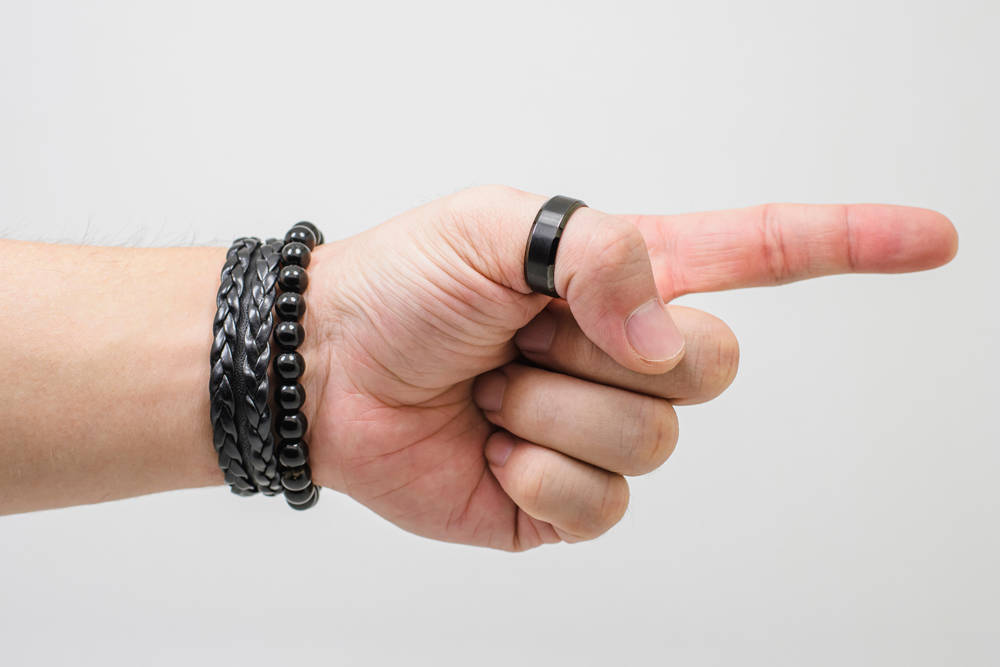 The western man wore a thumb ring in recent years, as it is a choice that surprises many in the eye. It is usually chosen by men who wear several rings and want to add another one, looking for a free finger. Or when stylistic differentiation is required. 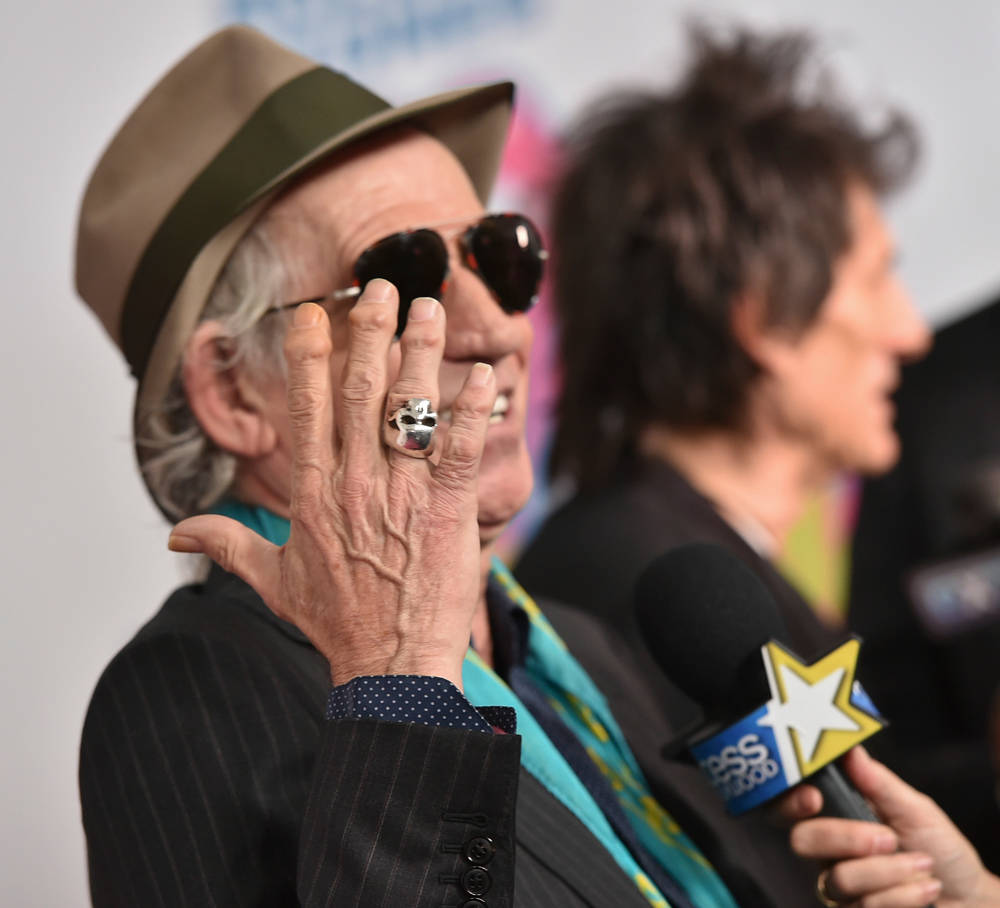 There is no symbolism here, in Western culture at least, as in other parts of the world it is considered a sign of power and wealth. There it is bulky and fancy. Bulky and fancy, however, are also what fashion demands, such as rings with skulls which has remained popular in recent years.

What the material says 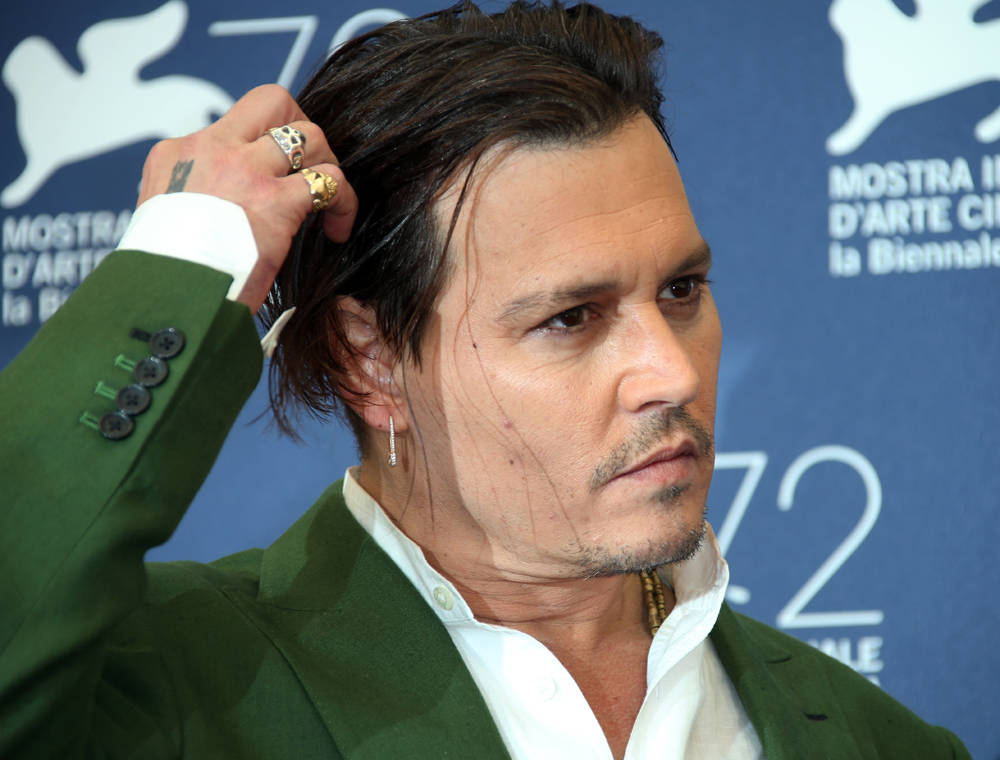 Where the men's ring has been a gold case for centuries, such formalities are now obsolete. All the ring material says is its price, acting simply as a symbol of financial strength.

Now the man has in his hands exceptional rings made of gold, white gold, silver, titanium, steel, marcasite, tungsten, and even ceramic or wooden rings. And silicone rings!

Gold obviously remains the best choice when the goal of the ring is to reflect our wallet. Apart from being a symbol of wealth, however, gold is also a classic and timeless choice that is hardly mistaken in the male hand. 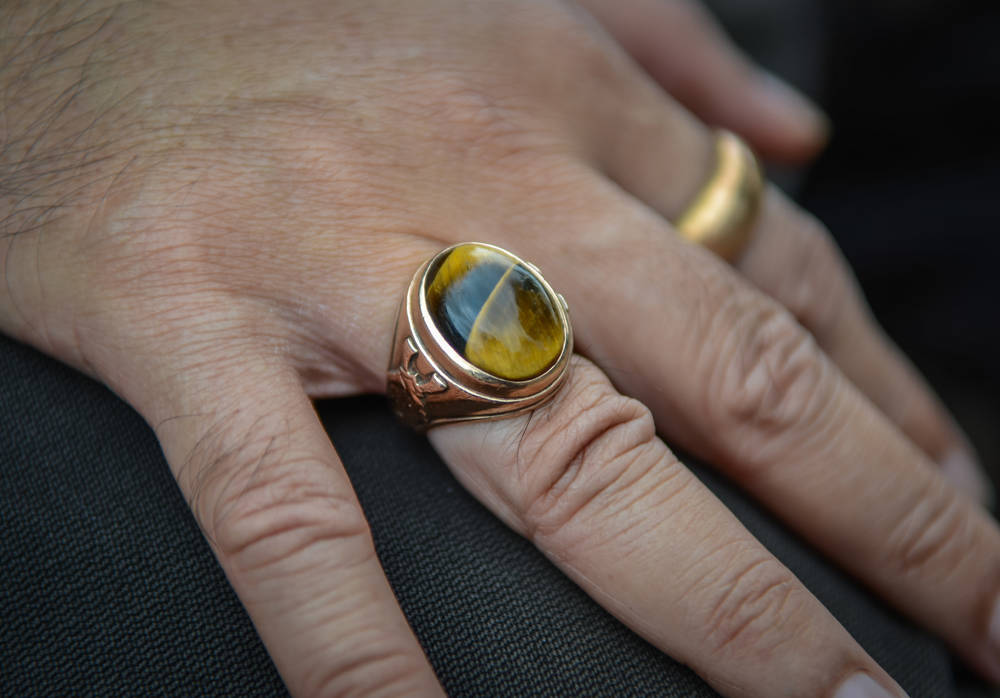 As a more fashionable but equally elegant choice, platinum is recommended, with the characteristic white shine and the smooth finish that goes extremely well with precious stones. But also semi-precious stones.

The titanium, on the other hand, with a wonderful silvery white luster and feather-weight, is gaining more and more ground nowadays. Silver is also attractive over time, as it is softer to the eye.

Cheaper rings made of marcasite, tungsten, zamak and ceramic have invaded the territory of the men's ring for good, bringing something new. Like wood of course, the ecological choice for the man who respects nature…

What do the gems say? 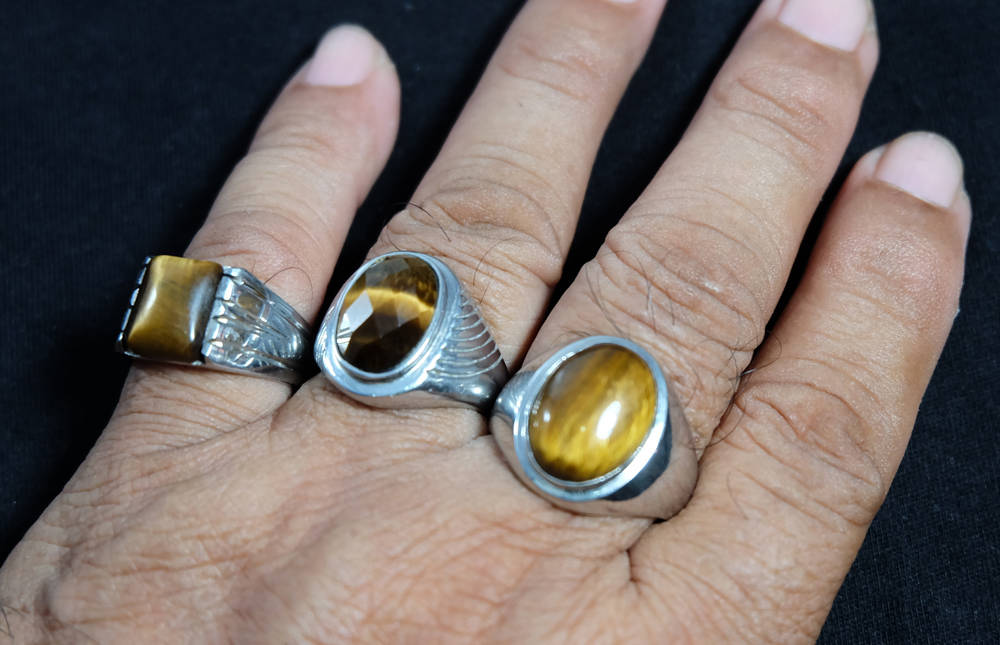 The whole men's ring was once his gem. Its very finesse and elegance. And the stone remains the heart of the man's ring, giving substance to what the holder's soul hides. And his wallet, alas.

The diamond remains the royal road of the male ring, as the astronomical amount that a flawless multi-carat diamond can reach is not for ordinary mortals.

Rubies, emeralds and sapphires are classified with their seductive colors in the foam of gemstones and adorn the fingers of those who invest a lot in a ring. Lots in terms of both money and importance attached to the ring.

The only rule that the man must follow with his rings 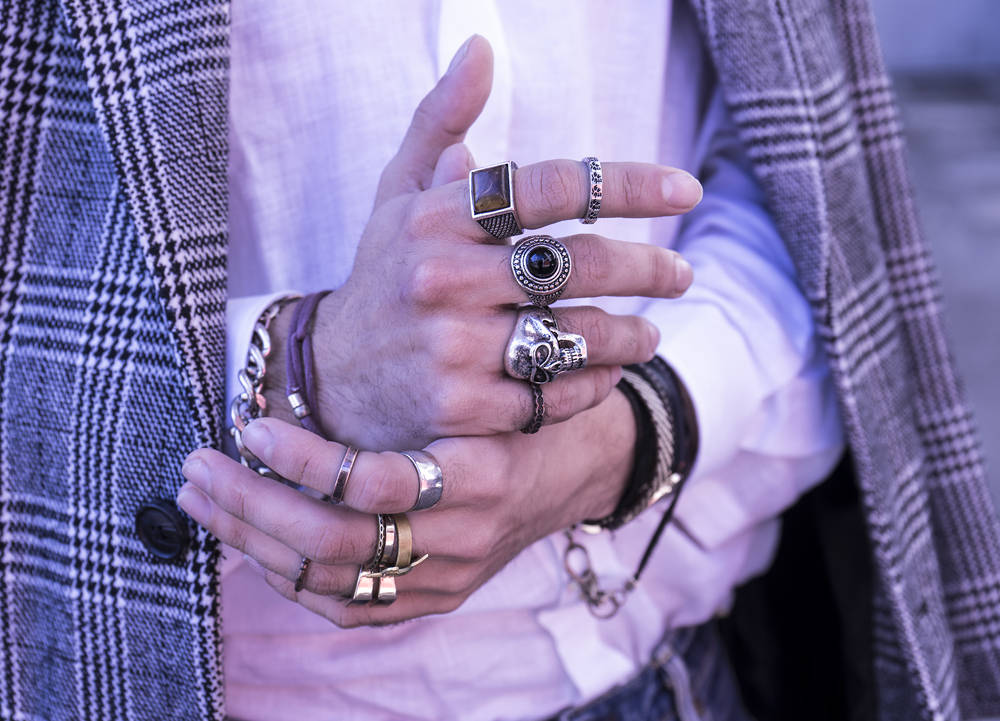 It is a fact that today the ring has primarily a decorative role, which is why stylists tell us that it should be chosen based on the clothing set. But also to keep pace with the size of our finger, so that a harmonious balance is maintained.

And while everything is a matter of taste, when we talk about good taste there is an inviolable rule, the so-called "law of three". That is, the man never wears more than three pieces of jewelry at the same time. Jewelry here is the watch, the cufflinks and the ring.

If you wear a watch and a wedding ring, it is good to put the ring on the other hand. And if you are wearing more than one ring, you must wear the same metals.