The forgotten tragedy of Italy that the government could have prevented 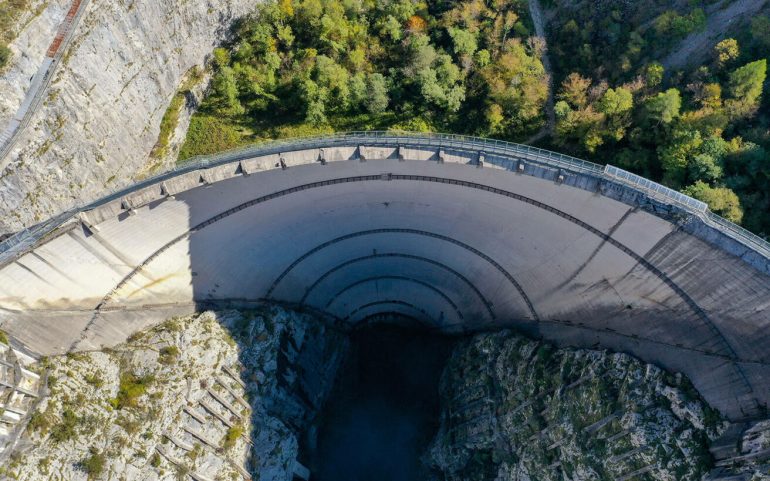 The water of destruction had entered for good into an inescapable ditch, not because fate wanted it to, but because man had decided.

A company and a government, in particular, that worked harmoniously by hiding facts and downgrading risk, thus playing complacently with human life.

And when the destruction happened and the death toll reached 2.000, the word "responsibility" would again be unknown to those involved.

The failure of the Vayod Dam on October 9, 1963 still stands today as a milestone in arbitrariness and corruption. Even when human lives are at stake. 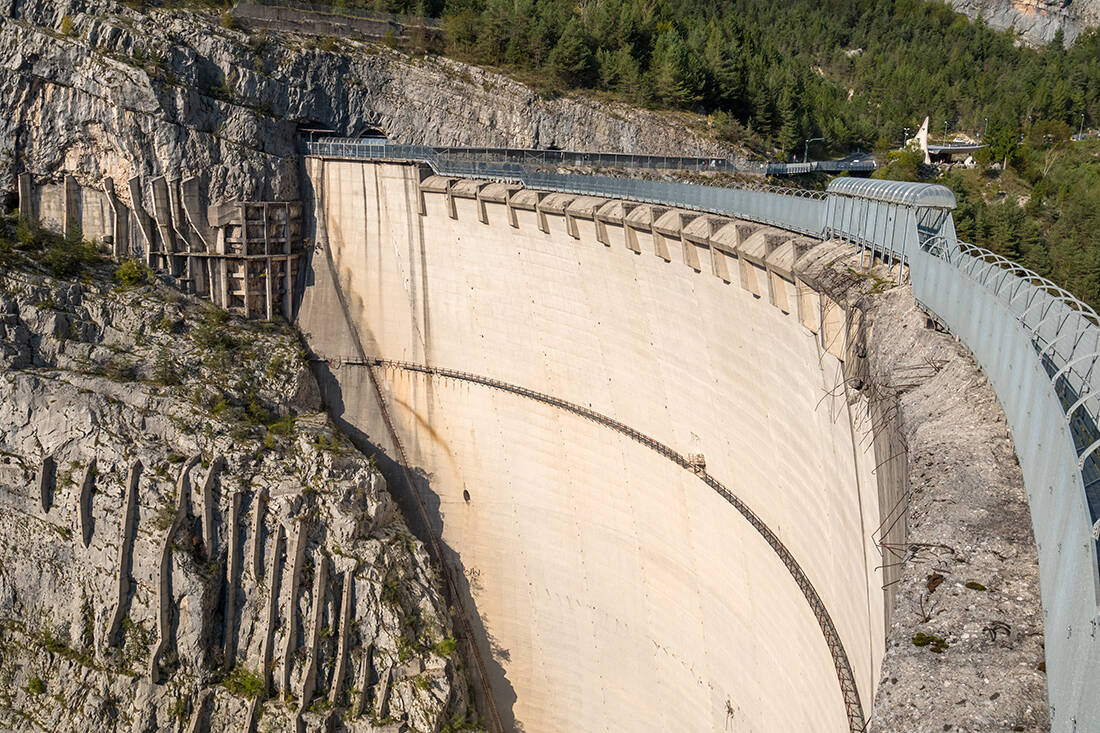 It is not just that a private company and the Italian government have underestimated the risk. It is that they destroyed aggravating factors, hid reports and tried to absolve themselves of any responsibility.

They wanted to prune the laurels for the "biggest dam in the world" and would not let annoying details like geological instability stand in the way.

The jewel of post-war Italy 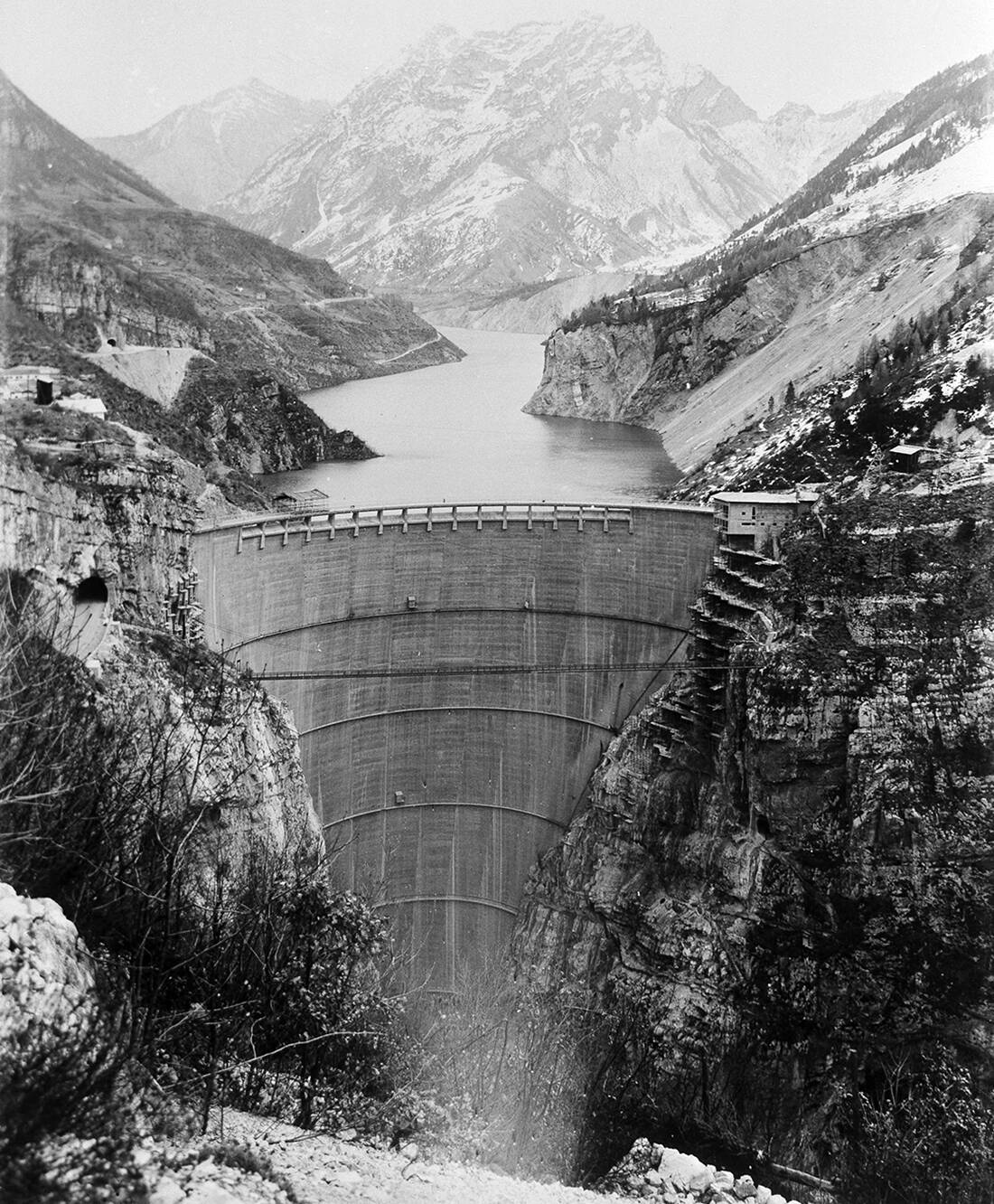 The valley of the river Piave in the Italian Alps remains an idyllic place, drowned in nature and greenery. Only the picturesque villages interrupt the majesty of nature and a visit today will not remind you of the untold tragedy that happened there in 1963.

But as long as you move from its southern fringes Alps to the north, the eye will inevitably fall into an unexpected view. Between two usually snow-capped peaks you will see a huge cement wall bridging a deep gorge.

This is the Vayod Dam, one of the largest arched dams in the world today and in its time the largest on the planet. Its 262 meters were unsurpassed in the 1960s.

What is so strange about a hydroelectric dam? It is completely empty! It stands simply as a reminder of the drastic human intervention in nature. But also the disaster it can cause. 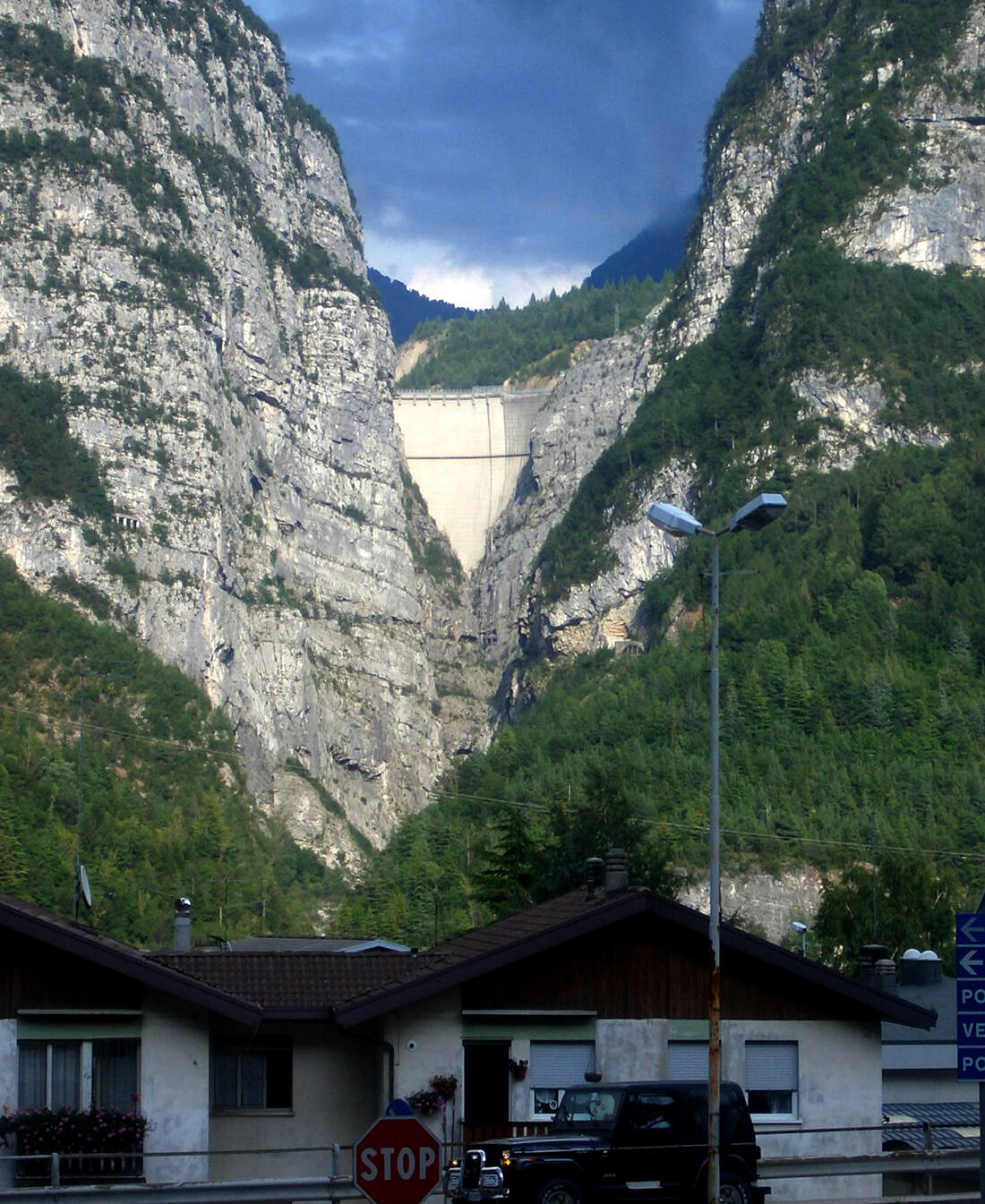 The gorge of the Piave valley is also one of the deepest gorges in the world and the first studies for its hydroelectric exploitation date back to the 1920s and 1930s.

An arched dam in the gorge would not only be a jewel of engineering that would dazzle the entire planet, but also a breath of fresh air for the country. Vaud would supply power throughout northeastern Italy.

The only problem; The peak to the right of the dam, the famous Monte Toc, the "Walking Mountain", as the locals call it from time immemorial, from its appeal to landslides.

Nevertheless, the Mussolini's fascist government approved the construction of the dam during World War II, but it would not take long to complete it. 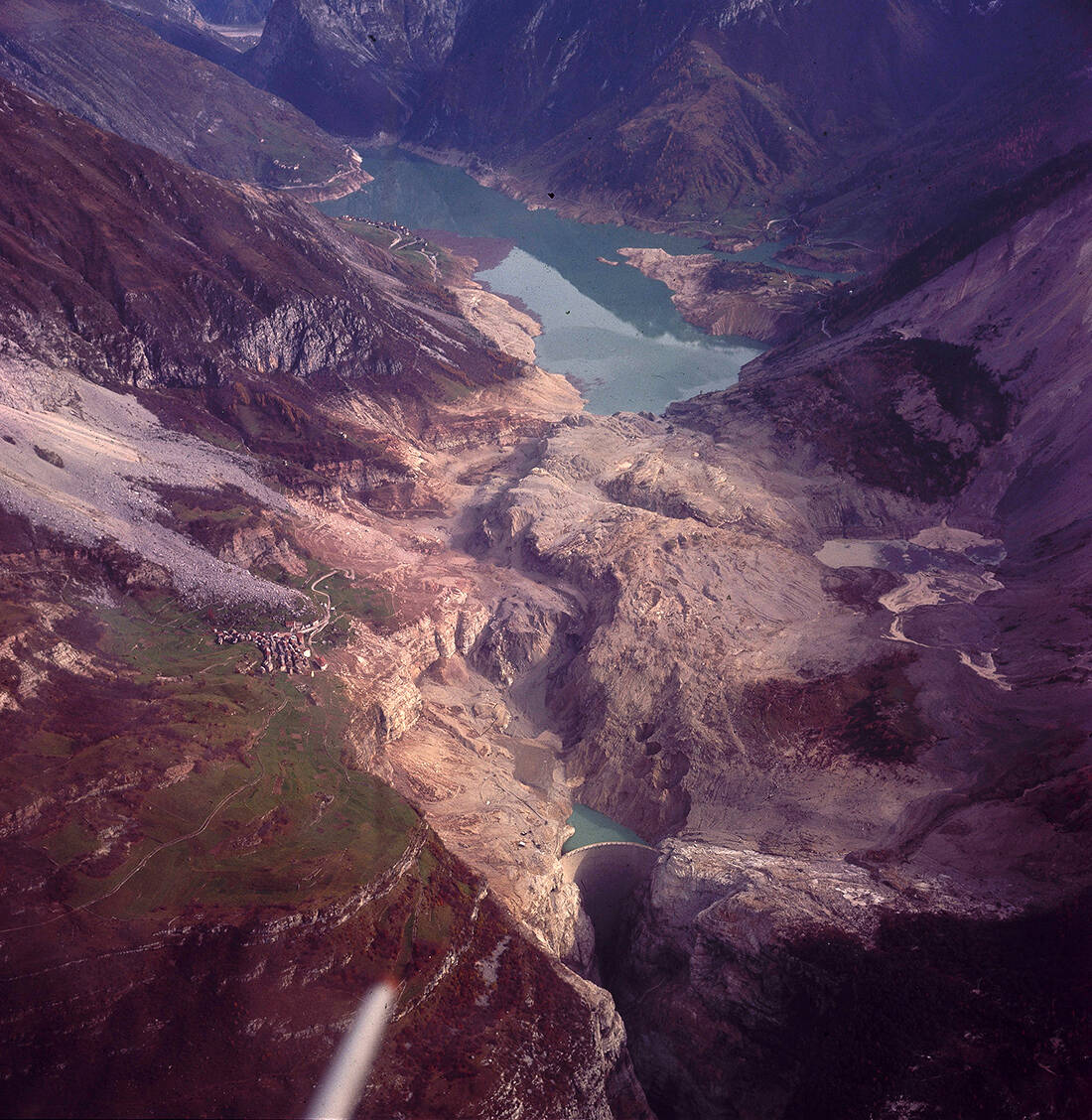 But Duce's finance minister, Giuseppe Volpi di Misurata, who's post-war economic agent and boss of SADE (Società Adriatica di Elettricità), which had a monopoly on the production and distribution of electricity throughout northern Italy, would last a long time.

In the 1950s, SADE's monopoly status was maintained by post-war governments and with the abundant money brought to the country in Marshall Plan, was the big moment for the dam, a dream of decades.

Everyone hailed its construction as a great sign of technological superiority and social progress. Nothing could stand an embankment, not even the analyzes that cited even historical landslides on the mountain.

SADE responded by saying that in its own geological studies the gorge was proving to be "sufficiently stable", and so its construction began with all formality in 1957…

The chronicle of a predetermined disaster 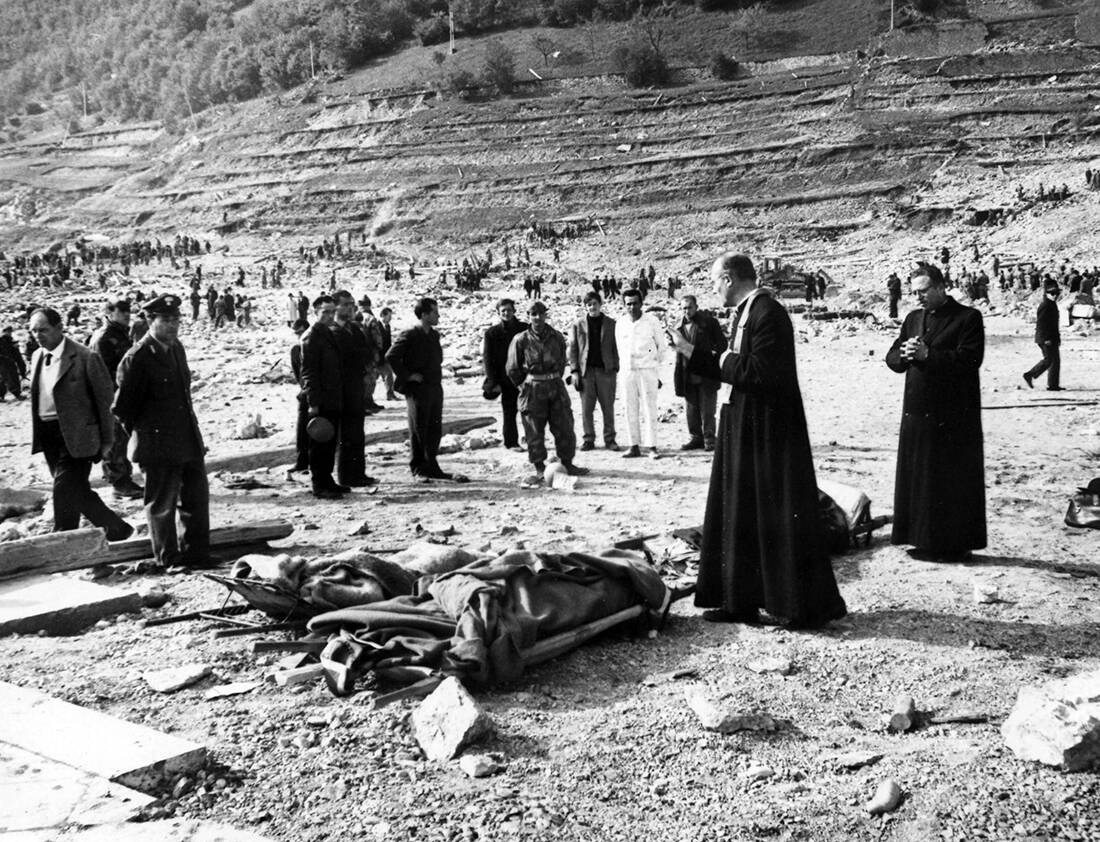 Practical evidence of Monte Toc instability dates back to 1959, when the new road made on the slope of the mountain showed cracks and subsidence.

Many were concerned and three independent university teams concluded that the point was extremely unstable. "If the dam is built, the ground will collapse in the basin as soon as it is filled," one of them pointed out.

SADE and the Ministry of Public Works registered the academic assessments and continued the construction smoothly. The project was completed in October 1959 and in February of the following year the company got the green light to start filling.

The inhabitants of the settlements of the valley, however, did not seem so happy. There was a reason, they said, that historically Monte Toc was called "Walking Mountain". Committees of anxious citizens were now digging up geological studies that showed that even the gorge itself was unstable.

Even the natural dams in the area collapsed every now and then. In March 1959 a worker was killed by a landslide at a nearby dam and landslides occurred throughout the summer of 1960. 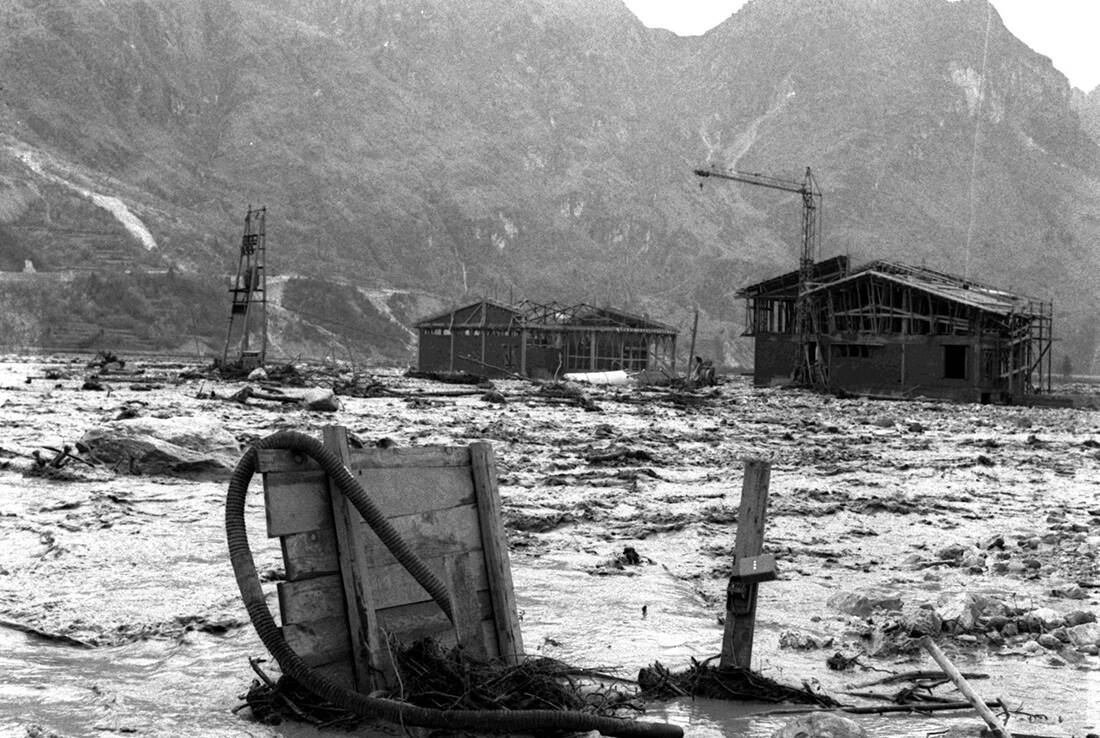 What did the government do about all this? He sued a number of journalists who made the issue public because they "undermined social order."

SADE, meanwhile, was aware of all this. Its own engineers supervised the project and constantly recorded the major problems faced by the dam with the "complex behavior of geological instability", as typically noted in the company's internal memo.

The studies had identified landslides in the right part of the reservoir basin and unstable zones on both sides, due to the unfavorable structure of the formations.

As early as 1959 they knew that the construction of the dam was causing landslides and small earthquakes in the area.

In November 1960, with the water in the reservoir reaching 190 meters (out of the planned 262), a major landslide occurred, 800.000 cubic meters of land and rocks fell into the lake.

SADE froze the work and lowered the water level by 50 meters, making new supports. In October 1961 they raised the water again and in May 1962 it reached 215 meters, driving the seismologists of the area crazy. 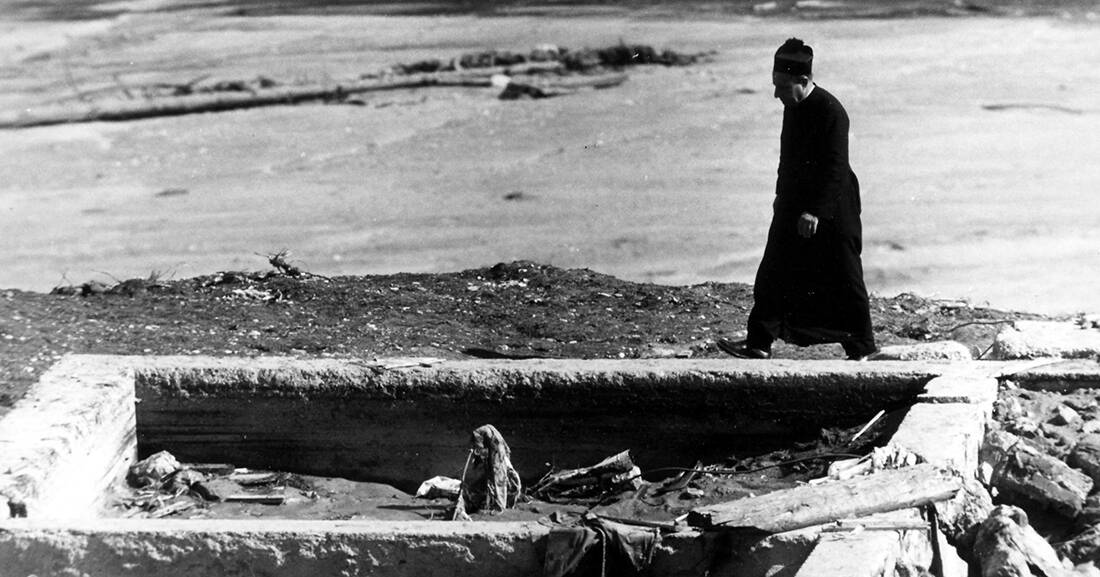 But also the inhabitants of the valley, as the tremors of the earth were felt. Furniture was moved into their homes and dishes were broken all the time. Company and government reassured the public by publicly downplaying the issue.

And as if that were not enough, SADE got the green light to get the water to the maximum, taking away the title of "the tallest dam in the world".

They filled it to the brim, despite new studies by SADE engineers (July 1962) who said that for safety reasons the water level had to drop by at least 20 meters.

In March 1963 the dam passed into national hands, to become the great jewel of the state ENEL. Which continued the same pattern. They even downgraded a fault of more than 1,5 km that appeared on the mountain slope.

Before the dam became world news for all the wrong reasons, the SADE chief engineer realized that the Mountain was inherently unstable.

He wrote characteristically in his latest report that "it seems futile to prevent landslides by technical means, because all the means you need to use exceed human limits."

A tsunami in a valley 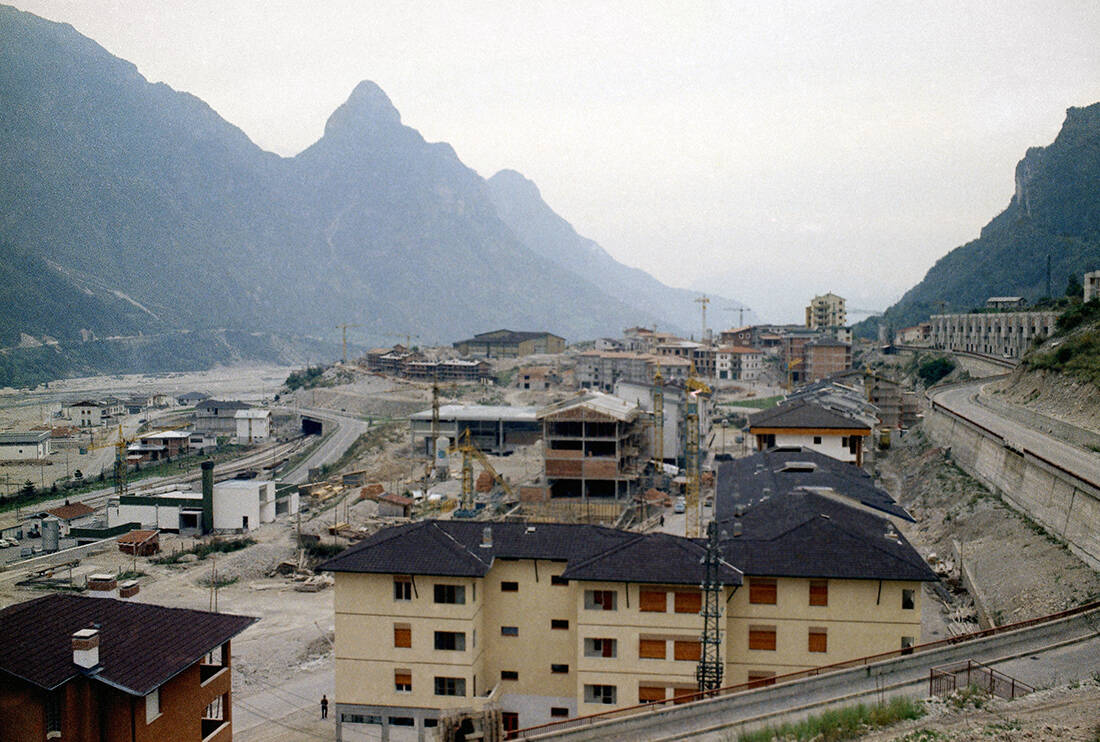 In the months before the disaster, the entire south side of Monte Toc was constantly moving, sometimes by as much as 1 meter a day. But again, no one paid attention.

Unfortunately, on October 9, 1963, at 22:39 pm, when the landslide that was to become the deadliest in European history took place: 270 million cubic meters of land and rocks were detached from the mountain and slipped into the reservoir. of the dam.

The landslide created tsunami, which climbed to 235 meters above the level of the tank. Some 25 million cubic meters of water jumped over the dam without seriously damaging it, drowning the valley communities.

The 25 million cubic meters of water fell on the communities from a height of 500 meters. Longarone was completely destroyed, as were 5 smaller communities near the town. More than 2.000 people lost their lives, more than half the people living at the foot of the mountain. 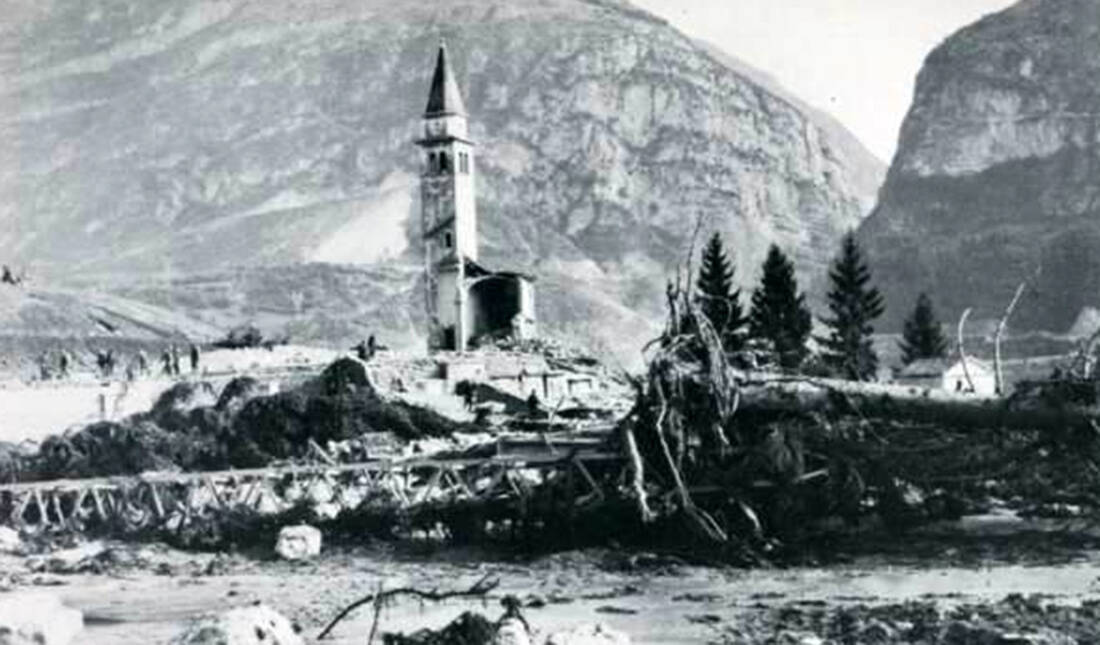 When the water receded two days later, all that indicated that there was once a human presence here was a bell tower that had remained standing. But also a few trees that marked the place that once was Longarone.

"An unprecedented tragedy in the recent history of Europe struck this morning the Northern Italian, the third highest dam in the world, the Vajont dam, despite the Italian Alps"," Kathimerini "of the time wrote characteristically about the untold tragedy.

"The result was the flooding of the Piave river valley by millions of tons of water and sludge and the complete destruction of the town of Logarone as well as five other smaller villages, San Martino, Spessa, Pinente, Pirago and Casso." 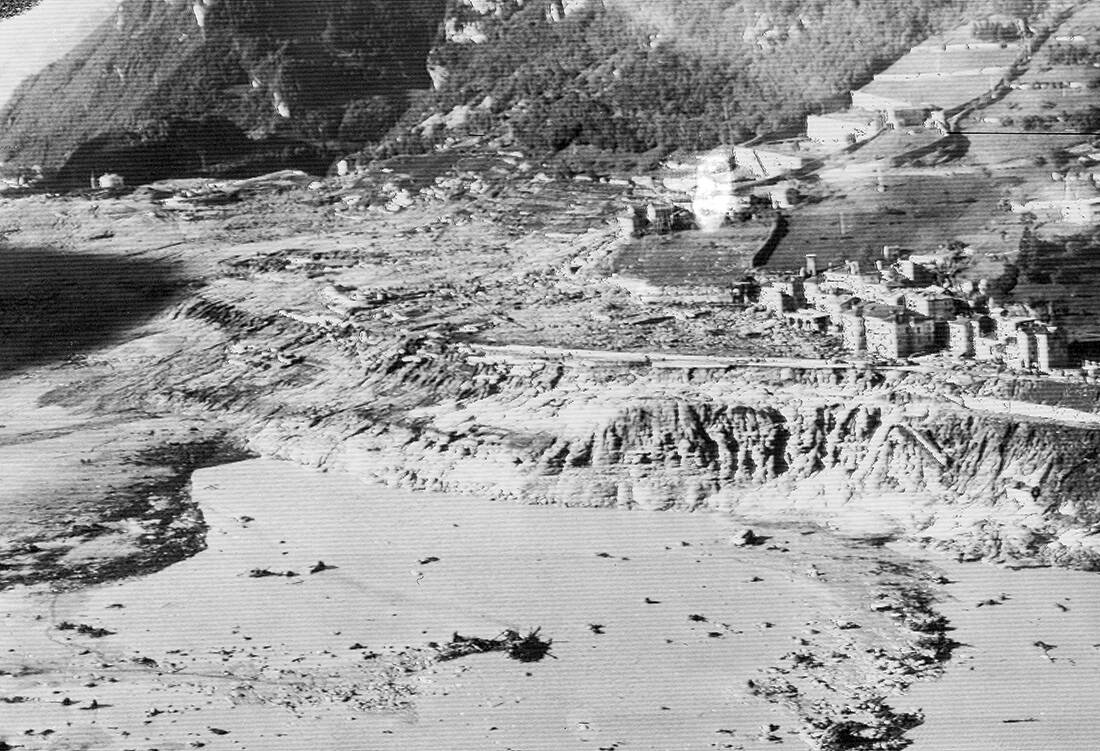 The magnitude of the tragedy shocked the world and plunged it Italy in mourning. Everyone was now demanding that the responsibility be named. How could such a construction miracle, made by the country's top scientists and engineers, fail to such an extent?

So when the water receded and the magnitude of the tragedy was revealed, the government, government agencies and everyone involved naturally attributed the disaster to asymmetric natural phenomena.

The pro-government press agreed, it was nature's fault and not man's. It was "God's will", the newspaper "l 'Unità" went on to write.

At some point, of course, it became clear that the wave of justice for the dead could not be stopped. Prime Minister Giovanni Leone resigned a few months later and became the head of SADE's legal defense. 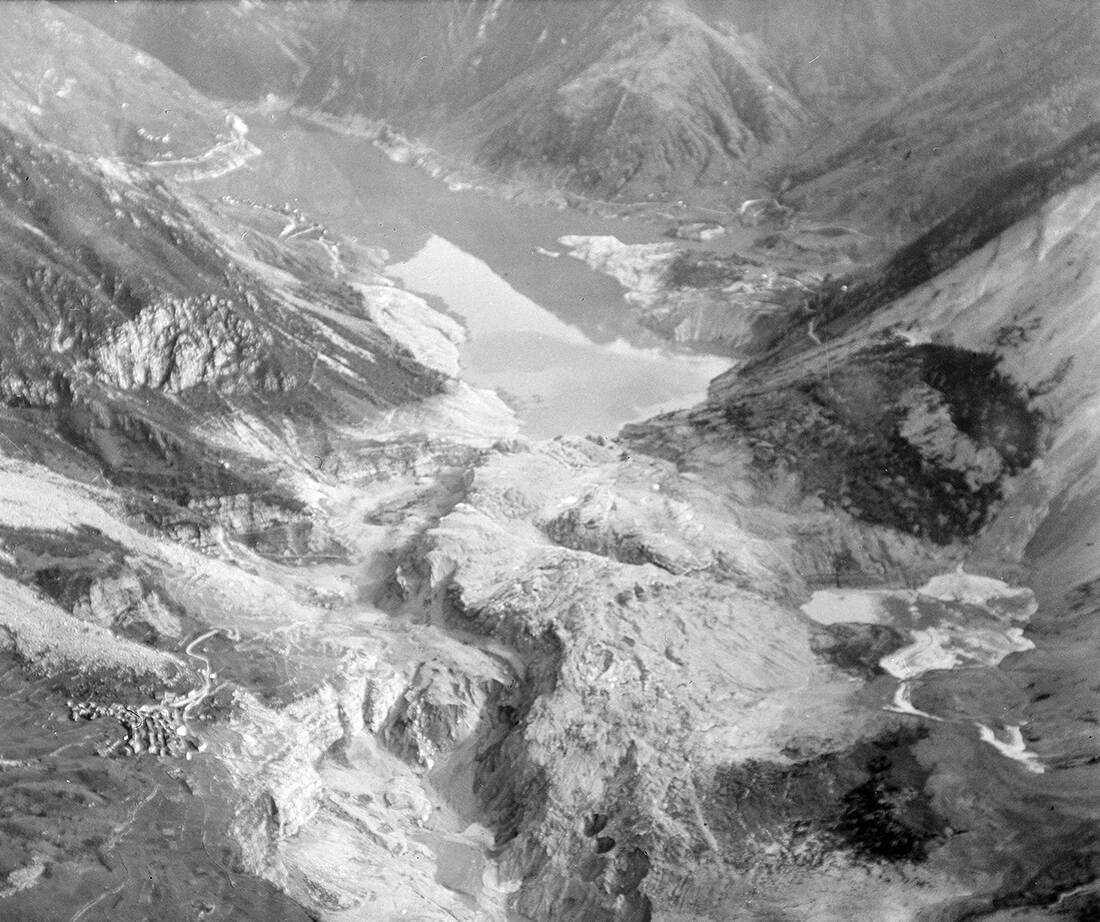 He was the man who managed to oust the company, drastically reducing the amount of compensation received by the victims and even managing the families of 600 victims not to get one.

The trial was held behind closed doors and resulted in caress sentences for a handful of people involved. At the 1969 verdict, the president of SADE and its chief engineer, as well as the chairman of the regional committee of the Ministry of Public Works, were convicted. Their sentence was 6 years in prison.

A SADE engineer had meanwhile committed suicide in 1968. The government never claimed compensation from the company. Those who saved their lives moved to a new village built for them, Vaud. Longarone and the surrounding villages were rebuilt in the following years and everything was now modern and new.

Residents also acquired a number of privileges, such as low-interest loans for starting a business, tax exemption for 10 years and things like that. Most of the companies set up from the beginning were sold to its big business interests Venice. 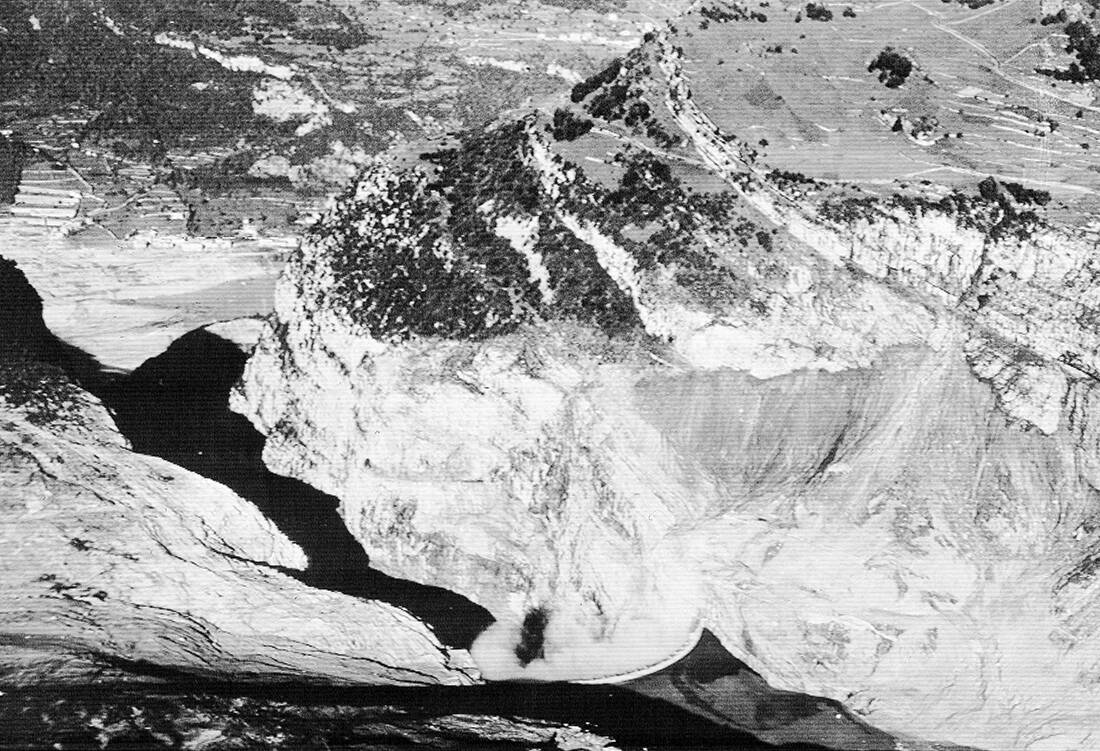 2008, the UNESCO classified the tragedy of the Vayod Dam as one of the worst man-made disasters in history.

The tragic event has not stopped arousing the interest of the scientific community for almost 60 years.

"The destruction of the Vayod reservoir is a classic example of the consequences of the failure of engineers and geologists to understand the nature of the problem they were trying to deal with," an expert at an Italian newspaper once commented.

Maybe he had not heard of a government and a company…