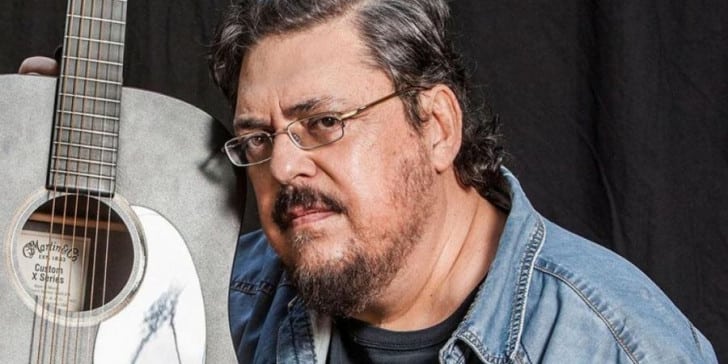 In the early hours of September 9, 2019, Lavrentis Mahairitsas suffered a cardiac arrest in his sleep and while he was at his home in Pteleos, Magnesia. When the ambulance arrived he was already dead. He was taken to the Volos hospital where he was pronounced dead. He was only 62 years old. The death of the composer and singer spread sadness all over Panhellenic.

Lavrentis Mahairitsas was born on November 5, 1956 in Nea Ionia, Volos. His father was a composer and director of the state orchestra of ERT, so he was lucky enough to come into contact with music from a very young age. He moved to Athens but at the age of 10 he lost his father, which may have marked him forever.

He studied at the Hellenic Conservatory and after serving his military service, decided to take up singing professionally, initially singing guerrilla songs with Panos Tzavela in "Syntrofia".

At the age of 20 he created together with Pavlos Kikrilis, Antonis Mitzelos and Tolis Skamatzouras the band PLJ. In 1982 they released their first album entitled "Armageddon", which initially may have sold very few pieces, but later received worldwide recognition. It is now a collectible vinyl, with the American and European press praising it as a masterpiece and one of the best Progressive Rock records ever recorded.

The following year the band was renamed Termites, naturally inspired by The Beatles (Beetles). Over the next five years the band released three albums and collaborated with many well-known artists. In 1988, however, it disbanded, reuniting only for an appearance 10 years later, at the Peace and Friendship Stadium.

In 1989, Lavrentis Mahairitsas released his first personal album entitled "Magapas and Sagapo", but it was not a commercial success. The next one released two years later titled "Didymoteicho Blues" however, became a huge hit, with the song of the same name he sang together with Giorgos Dalaras giving him the ticket to a great career in Greek singing.

Until his death, he released 16 more records, collaborated with leading names from Greece and abroad, while writing music for theater performances and films. The same commercial success as the "Didymoteicho Blues" record, had the "Rixe Kokkino sti Nychta" and "Pausilipon", while the most commercial of all was "The Break Holds Two Lives" which was released in 2001.

He was married to Eleni Mahairitsa, with whom he had a daughter. He was a friend of the KKE and participated in many KNE festivals. His death came very early and in addition to sadness caused a shock to relatives and friends, who on September 11, 2019, gathered at Zografou Cemetery to say their last goodbyes.
Source: e daily.gr