Female pilots in the… Battle of the Aegean against Turkish fighters 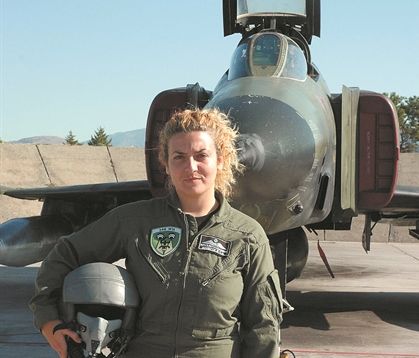 Subcommander Ioanna Chrysavgi trains not only Greek pilots, but also Italians, in the framework of the agreement that exists with NATO member countries

The XNUMXnd Battalion (I) Marina Konstantinou from Patras, leader of the School, when she was studying at the Icarus School, is currently training in Kalamata to fly to the Aegean with one of the Air Force fighters.

2021 will also be the year of Greek pilots, not only in transport aircraft and helicopters, but also in fighter jets. The young brigadier general, daughter of the professor of Neurosurgery at the University of Patras, Dimitris Konstantinos, who died tragically in 2018 in his attempt to conquer the top of Aconcagua, the highest mountain in America, took Democracy last June with great emotion. her degree from the Icarus School and was immediately transferred to train in fighter jets (either Mirage or F-16) in Kalamata: "I love airplanes very much and little by little I have come up with them," she said, adding that she is not afraid of the fact that it is a male-dominated profession.

After her training in Kalamata, Lieutenant Colonel Konstantinos may go for further training at a training center in Italy and when she returns she will be in the Aegean skies, as a guardian of the national airspace and air traffic rules in the Athens FIR by Turkish air intruders.

It is no exaggeration to say that the Air Force does not distinguish men from women in its fighter jets, but also in its ground units. He considers them equal. After all, they have the same training, the same exercises, the same skills in flight simulators and the same agony, but also the pride when they hold the rudder of a fighter at 18.000 feet, doing the famous maneuvers, such as the "upside down Cuban 8".

And a Turkish pilot

There has been a rumor lately that in the Turkish provocations in the Aegean, a Turkish fighter pilot appeared in a Turkish F-16, sparsely and where. It was the time when Erdogan imprisoned (or demobilized) one after another the F-16 pilots for participating in the coup. It was then that the Turks had shortages of flying personnel and used retirees or even Turk Hava Yollari pilots. However, none of our pilots had met Turkala in the Aegean, the fame was becoming more and more intense from the propaganda articles of Turkish newspapers.

But it was not a rumor when suddenly in the skies of the Aegean appeared with a Phantom the subcommander (I) Ioanna Chrysaugi, who is the first Greek fighter pilot. And her first mission was as she says in the Aegean, but without giving more details what happened when her Phantom met the Turkish F-16s near Ai-Stratis. Today, Squadron Leader Chrysaugi is a pilot trainer.

From the 348th Tactical Reconnaissance Squadron he was transferred to the 120th Air Training Wing in Kalamata to train pilots. Among the pilots he is training is the XNUMXnd Battalion Marina Konstantinou, who graduated last June and is training for fighters. In addition, Subcommander Chrysaugi trains not only Greek pilots, but also Italians in the framework of the agreement that exists with NATO member countries. The flying Chrysavgi has other duties as well as the announcer in the "Zeus" Demonstration Team.

The first Greek pilots graduated from the Icarus School in 2006. From then until the summer of 2020, a total of 11 pilots have graduated, ie those who have the privilege and honor to have the "poulada" in their uniform. Athanasia - Maria Terzopoulou from Aetoliko and Katerina Kouskoviti were among the first to start flights to Tatoi with military training aircraft.

Subcommander (I) Achilles Georgakila is the second Greek woman to "tame" an Air Force fighter jet. What impresses is that today he serves in the fighter and a pair of pilots. The wife flies with a different type of fighter jet than the one her husband flies.