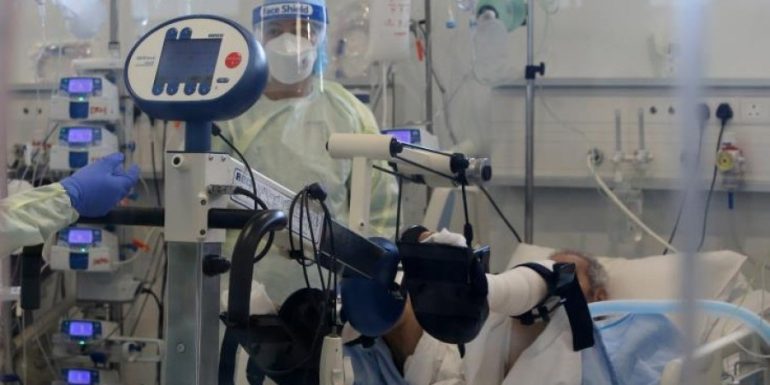 The outbreak of coronavirus from the Omicron variant is raging internationally, recording large numbers of cases and deaths. The situation in South Korea is alarming, where a new record of new coronavirus infections was announced today, for the second consecutive day, with their number breaking the barrier of 600.000 for the first time, and a tragic record of patient deaths.

The Vietnamese Ministry of Health announced on Wednesday that 24 cases of SARS-CoV-180.558 - a record for the second consecutive day - were confirmed in the previous 2 hours, bringing the total to 6.820.458. The deaths of 62 patients due to its complications COVID-19 increased the death toll from the new coronavirus pandemic in the Asian state to 41.607 dead. The country of 98 million inhabitants has received 200,7 million doses of vaccine for COVID-19. 98% of adults have received two doses of the vaccine and the immunization campaign has now been extended to children under 12 years of age.

The Malaysian Ministry of Health announced today that in the 24 hours until midnight yesterday, Tuesday, 105 patients succumbed to complications COVID-19 and 28.298 cases of SARS-CoV-2 were confirmed. The death toll from the new coronavirus pandemic in the country of 33 million people reached 34.099 deaths out of a total of 3.900.433 infections. Active cases decreased to 299.331. In intensive care units (ICU) 374 patients are treated with COVID-19, 233 intubated. She has been completely immunized against it COVID-19 78,9% of the population, while 47,1% have received a booster dose of vaccine.

In Germany, 294.931 cases of SARS-CoV-2 have been confirmed in the past 24 hours, bringing the total to 17.990.141, according to data released today by the Robert Koch Institute, the country's epidemiological watchdog. The deaths of 278 patients due to its complications COVID-19 increased the death toll from the new coronavirus pandemic in the country to 126.420, according to the same source.

The Italian Ministry of Health announced yesterday Wednesday that in the previous 24 hours another 137 patients succumbed due to its complications. COVID-19, compared to 180 the previous day, while the number of confirmed cases of SARS-CoV-2 decreased to 72.568, compared to 85.288 a day earlier, after 490.711 tests. With 157.314 deaths due to the new coronavirus pandemic since it broke out in its territory in February 2020 until yesterday, Italy, with a population of 60 million, officially records the second heaviest official death toll in Europe, behind only Britain, and the eighth largest. 13,56 million infections have been confirmed so far. The number of patients who are hospitalized with COVID-19 -except for those in intensive care units (ICU) - decreased to 8.410 yesterday, compared to 8.473 the day before yesterday Tuesday. 31 patients were admitted to the ICU, compared to 51 the previous year. The total number of patients in the ICU decreased to 477, from 502 the day before yesterday Tuesday.

A new coronavirus infection was reported again in South Korea today, for the second day in a row, breaking the 600.000 barrier for the first time, and a tragic record of patient deaths, as the wave attributed by the authorities to the most contagious variant Homer is still raging. The Korean Disease Control and Prevention Service (KCDA) announced that 24 cases of SARS-CoV-621.328 were confirmed in the 2 hours to midnight Wednesday and 429 patients died due to its complications. COVID-19. The number of infections increased by 55% in one day. Cases, which first became five-digit in January, are rising exponentially this month. They exceeded 300.000 for the first time on March 9th. The death toll from the new coronavirus pandemic in South Korea has risen to 11.481 dead from a total of 8.250.603 infections, according to the KCDA. The mortality rate remained unchanged at 0,14%. The number of patients admitted to hospitals in a serious to critical condition, a key indicator, fell to 1.159 (-85 in 24 hours).

The Indonesian Ministry of Health announced yesterday Wednesday that in the previous 24 hours 13.018 cases of SARS-CoV-2 were confirmed and 230 patients died due to its complications. COVID-19, with the death toll from the new coronavirus pandemic in the country reaching 152.975 dead out of a total of 5.927.550 infections. As of yesterday, 152,40 million people in Indonesia had been fully immunized. The vaccination campaign in the archipelago targets 208 million citizens, about 80% of the population.