Is it time to say goodbye to the masks? Which countries made this choice?

Masks: Which countries threw them away and how safe is this choice - What does Zorie Dorothea Pana warn about Cyprus 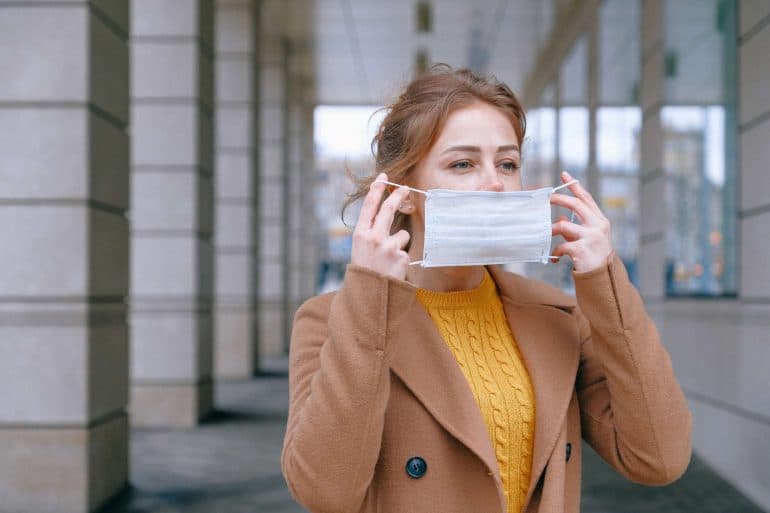 There are already countries that have declared an end to the pandemic by lifting restrictive measures. In this context, they say goodbye to the masks

At the moment Ομικρον besieges most of the countries of Europe, there are also states that decide to declare the end of the pandemic and lift the restrictive measures. The most typical example is that of Denmark who announced the return to the pre-coronavirus era and the coronavirus as a non-threatening disease to society. In this context, despite the increase in cases, he removed the restrictions that include the use of a mask.

The rationale behind the decision is the assessment that the hospitalizations due Ομικρον are reduced, the number of deaths is reduced and the vaccination rate is sufficient. As of February 1, all restrictions currently in force at the national level, such as a health pass, the use of a mask or the premature closure of bars and restaurants, will be lifted.

In her footsteps Denmark and Britain which, despite the great burden on the health system, leaves behind the restrictive measures as there is a reduction of cases compared to ten days before. Among them is the restriction of mask use in specific structures.

Η Netherlands which, however, had imposed a general lockdown even before the appearance of Omicron, seems to have managed to improve its epidemiological picture as the number of hospitalizations and deaths is steadily declining despite the increase in infections. The Dutch can now enjoy bars, restaurants and museums, and the government plans to lift all remaining measures by 1 February.

Doubts about the relaxation of measures

Despite its transmissibility, the less dangerous nature of its strain Ομικρον raises hopes that in the future humanity will be able to coexist with its new roommate. However, experts warn that the announcement of the end of the pandemic is premature. Apart from the important issue that it is extremely likely that a new variant will appear as long as vaccinations do not progress worldwide, the current picture of European countries leaves no room for complacency, as the Ομικρον is less serious but does not mean that its transmissibility can not put pressure on health systems.

At the same time o WHERE already from the dispersion of the variant Delta warned countries to be vigilant in lifting measures, in particular the abolition of mask use, which has become an important weapon along with pandemic measures and does not work against vaccinations, but needs to be used as a booster. .

Besides, the appearance of the variant Ομικρον has sounded the alarm for mask use in many countries. THE Cyprus is one of those that not only have imposed a general use of the mask but the mask of increased protection is recommended in specific areas in order to break the transmission of the contagious Omicron.

The WHO statement on the course of the pandemic is typical

"This pandemic, like all other pandemics before it, will end, but it is too early to relax. With the millions of infections occurring in the world in the last and the following weeks, combined with the weakening of immunity and the seasonality of winter, it is almost a given that new variants of it will appear and return. COVID-19.

But with strong surveillance and monitoring of new variants, high intake of vaccines and third doses, ventilation, affordable and equal access to antiviral drugs, targeted testing and shielding of high-risk groups with high-quality masks and social alienation, if a new paradigm occurs "I believe that a new wave could no longer demand a return to blockades or similar measures at the level of the pandemic population."

Dr. Zoe Dorothea Pana: "We are going through another pandemic wave, not to upset the balance"

The balance with which we manage to keep society open should not be disturbed, said Zoe Dorothea Pana, Lecturer in Pediatrics at the European University of Cyprus and a member of the Advisory Scientific Committee (SCC) of the Ministry of Health, noting that the discussion on possible relaxations should takes into account the fact that we are still going through a pandemic wave, while we have steadily increased rates in hospitals.

In her statements to KYPE and asked if on Tuesday, during the meeting of the TEU, any possible relaxations will be discussed, Ms. He always said that "We are in a phase where we may need to review the protocols, the regular laboratory tests and in general the way Cyprus operates within the framework of the security that we must have, since we are still going through a pandemic wave."

"We have to have a discussion on the whole and see what we can simplify, how we can help the world that has suffered so much and together we can find a harmonization in this context," he said.

Regarding the possibility of giving a fourth dose, in addition to the discussion about immunocompromised people and the elderly that is taking place abroad, Ms. Pana said that such a question has not been asked for the general population yet.

"Do not upset the balance"

"What we said last week was to see a little again how the situation is stabilizing and what is new in relation to the executive that prevails in Cyprus, Omicron" said the TEU member.

Ms. Pana said that we must take into account the fact that we are going to face a situation "which is special" as the Delta mutation has not been eliminated and on the Delta came and prevailed Omicron. "Yes, we are seeing a stabilization at this time in terms of the epidemiological picture in the community, on the other hand we are seeing a steadily increasing pressure on the part of the Hospitals" with in-hospital rates being particularly high.

And this balance of stabilization, continued Ms. Pana, "I do not think we should disturb it at this stage yet."

He further referred to the ECDC Risk Assessment Report of 27 January which states that "we are still going through a pandemic wave of Omicron, that although we now have data showing that Omicron strain is associated with a milder disease in the general population, it does not mean that due to the spread of the disease, even later in time we can not see a pressure from a serious illness and an increase in the serious illness, especially in people aged 60 and over ".

So, continued Ms. Pana, "I think we need to have a discussion on the whole and see what we can simplify, how we can help the world that has suffered so much and together find a harmonization in this context."

Regarding specific suggestions, he said that "we must always discuss it as a group, as an Advisory Committee and substantially submit our recommendations to the Minister".

He also said that we should not ignore the recommendations of the European Center for Disease Prevention and Control, as "they have the big picture from all Member States" while at this stage "the immunization subsoil of the Member States and the time they spend in relation with the rise of Omicron it is a little different ". He explained that at this stage we see a slight divergence in national strategies and a difficulty in harmonizing a protocol, so "management is not very easy".

According to Ms. Pana, the common component is "Debate on simplification, protocol harmonization, facilitating the world" and the message is that "We have to adapt and live with the coronavirus."

Answering a relevant question, Ms. He reiterated that the number of infections within the community "will remain relatively high for some time".

"Because we are very supportive of the vaccination and booster dose, because also a percentage of people have been immunized through natural disease, we hope not to see a similar increase in hospitals in the near future, which are also trying to keep up. their own balance ", write down.

As he mentioned, so far we do not have any situation, which is extreme.

Asked if the possibility of a fourth dose of vaccine is being discussed, Ms. He always said that "For the part of the fourth installment, what we do know is that studies and knowledge and documentation are running on if and when and to whom it may be needed."

"Some discussions abroad take place only at this stage for people who are immunosuppressed. There, however, the fourth dose is not exactly a booster dose "but" characterized as an additional dose " he said. "So there is a difference in what we mean when we say to give a fourth dose to the severely immunocompromised.", he said.

He also referred to the separate discussion that mainly concerns the elderly with underlying diseases and especially in closed spaces, such as nursing homes.

As Mrs. Pana, "I think that the decision and the evaluation of the data will be discussed by the National Vaccination Committee that we have and it goes without saying that we assist in this whole process of evaluation of the existing data." "I do not think that for the general population, for all of us, such a question has been asked yet.", concluded.

With information from KYPE / CNN