Municipality of Famagusta: Delegation met with the Parliamentary Committee on Refugees 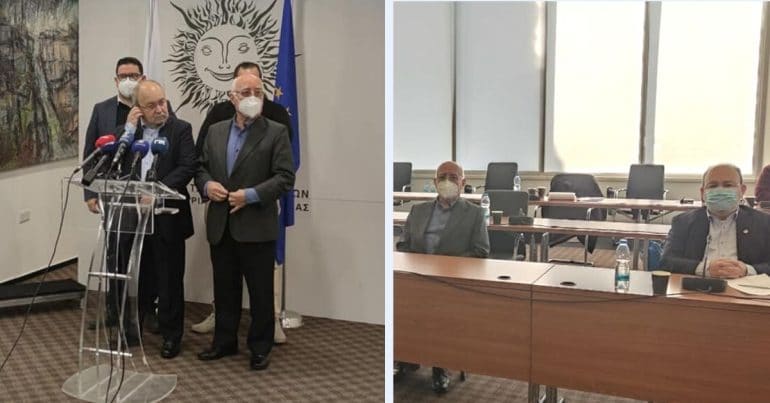 In his statements after the meeting, the Mayor of Famagusta Dr. Simos Ioannou said that they informed the Refugee Committee of the Parliament about the problems faced by the citizen of Famagusta and the Municipality of Famagusta in general.

"There has been a very good discussion on various issues, such as the issue of promoting Famagusta abroad and the help we are seeking from the Parliamentary Committee on Refugees. The refugee problems faced by the people of Famagusta. The issue of equal distribution of burdens, the eternal issue of relocation of the Municipality, which seems to have not been resolved yet. "We have seen a full understanding from the Refugee Committee," he added.

He further added that they had decided to send a note, a report on their activities and what they wanted to do to promote the Famagusta issue in order to assist them with the various contacts they would have abroad, as well as a note on concerns the relocation of the Municipality.

"I think such meetings help a lot and we hope they will continue in the future. I think that mainly the Parliamentary Committee on Refugees, is the Committee with which we have a special relationship as a Municipality and I believe that not only this meeting today but also other meetings in the future will continue on various other issues, which will arise regarding the "problems of the refugee world in general and the citizens of Famagusta in particular", he added.

Asked if his appeals were heard so that the people of Famagusta would not appeal to the so-called "compensation committee" of the pseudo-state, the Mayor of Famagusta said that they did not know.

"It's an issue that concerns everyone individually. We have a clear position on the problems that will arise from this appeal to the "real estate committee". We know very well what this "real estate committee" has to offer. I have said it many times: If they really wanted to give the people of Famagusta the opportunity to return to their city, they did not need this process of intermediate involvement of the "real estate committee", which has nothing to do with return. There could be other procedures until the final solution of the Cyprus problem. "The various EVKAFs, various institutions, have now been involved in order to make this position difficult", he added.

The Mayor of Famagusta said that we simply have the obligation to emphasize to our fellow citizens the problems that will arise.

"Beyond that, I say it again, it is everyone's constitutional right to appeal. And the main reason, which they appeal to, I said and we discussed it today and we also found understanding, is the financial problems, the other problems that the refugees face and are forced to get to this point. That is why we said that solutions must be found. There is this law, which was approved a year ago with the 4 per thousand, which had to be given to this fund by various other construction works, which has not been done yet. It is 16 million, as the President of the Commission told us. "It's not a lot of money, but they can help refugees in very difficult situations, in illnesses, in studies, in a refugee who is in a very difficult position," he added.

The Chairman of the Parliamentary Committee for Refugees-Trapped-Missing-Victims, Nikos Kettiros, said in statements that during the meeting they discussed issues concerning Famagusta and the Municipality of Famagusta.

"I must tell you that from today's contact we had with the Mayor and members of the Municipal Council of Famagusta, but also with the people of Famagusta that we come in daily contact, we feel, we feel, we receive the feeling of frustration and anger that everyone feels Famagusta, for the situation that continues to prevail in recent years. Many people are forced and I emphasize the word are forced to resort unfortunately to the so-called "compensation committee". We see people in refugee settlements losing their homes, being forced to stop their children's education. "To live in miserable conditions in the refugee settlements and in the self-housing settlements and the state to be absent", he added.

As Mr. Kettiros said, "let us only remember the compensation for the loss of use of some, only when it is a pre-election period".
"But there should be laws passed, such as that of the 4 per thousand tax compensation for the sale of property in the free areas and it should not have been implemented because the state has been slowing down for the last year. "Sixteen million could have been collected and donated to this world, which is most in need."

Very soon, said Mr. Kettiros, they will again have the issue of how the legislation of 0,4% will be implemented in the Refugee Committee, as well as other issues related to the compensation of the loss of use and the "exploitation" for this world of Turkish Cypriot property, which is an issue "which whenever we enter the word scandal is the first thing we remember".

"Turkish Cypriot property should be rationally managed and linked in some way to the loss of use with specific measurable criteria. "We have demanded this and we will continue to demand it," he added.

He also said that they asked the Famagusta Municipal Council to prepare a briefing note for them in the near future, very soon to make it available to MPs, who participate in European and international organizations, on the issue of information on the problem. of Famagusta, on the issue of settlement and the accomplishments that Turkey is making.

"We will give this note to all our fellow Members, so that they can inform all the international bodies in which they participate," he noted.

He also mentioned that they discussed the issue concerning the housing of the Municipality of Famagusta.

"You know, four times a decision has been made for housing the Municipality of Famagusta and every time an invisible hand cancels this decision. The last decision concerned the housing in a piece in Pano Polemidia. It seems that again this invisible hand intervened and creates problems again. We will not tolerate this situation to continue. "Any Local Authority should be proud, it may host the Municipality of Famagusta, because if it were not for the Famagusta people in these areas, everyone can understand who the values ​​of the properties would be", he added.

And for this, Mr. Kettiros continued, the Municipality of Famagusta will prepare an information for them in writing and for this specific issue of housing, the Refugee Committee will return to its session to examine it exclusively.

DISY MP George Karoullas, in statements to him said that "we support and support every effort of the Municipality of Famagusta and the people of Famagusta in general, in the work of return in every possible way."

"We live and experience the rage and indignation of both the Municipality of Famagusta and every Famagusta we see the city, Famagusta, Vasilevousa, being lost through the tactics of settlement, of the Turkish conqueror. At the same time, the Government raises the issue of the handover of Famagusta to its legal residents through the Confidence Building Measures it puts in the international political bodies, despite the unfavorable international political scene, in order to return to the natural space of Famagusta, to the creation of Of Famagusta ", he added.

Also, Mr. Karoullas continued, there is a need "for all of us to mobilize and work together not only for the return, but also for the management of the issue of equal distribution of burdens".

"At a time when many, many Famagusta residents are suffering due to their financial situation. "To inform, at the same time, about the dangers of appealing to the" compensation committee "of the occupiers with any respect for the right to private property", he noted.

The issue of the relocation of the Municipality, said Karoullas, in functional buildings is crucial and needs to be resolved as soon as possible.

"The Government has already granted land to the Municipality of Famagusta and financial assistance and this issue should be settled. We are here as a Refugee Committee to monitor the whole issue that has finally taken its course. "It is also important to recognize the need to build the social fabric of the city, if we take into account that generations are passing away and the new generation must have a direct relationship with the city," he added.

DIKO MP Christos Senekis, in his statements, said that at today's meeting of the Parliamentary Committee for Refugees, Caged, Missing and Suffered, they had the opportunity to be informed about the actions of the Municipality of Famagusta.

"Among other things, the appeal to the so-called Real Estate Commission in the occupied territories and the so-called return under occupation administration were highlighted. We understand the anger of the people of Famagusta, but the anger should not lead us to actions that will be the tombstone of the return of Famagusta and the overall settlement of the Cyprus problem. "The so-called return to the occupied territories is a mad violation of UN Security Council resolutions, which provide for the return of the city of Famagusta to legal residents under the administration of the United Nations," he added.

But, Mr. Senekis continued, "and if someone tries to claim a return under occupation administration to the so-called Real Estate Committee in the occupied territories, he will face EVKAF, based on" decisions "of the so-called Famagusta District Court, according to which in addition to 90% of the properties in the enclosed area of ​​the city of Famagusta belong to EVKAF ".

Mr. Senekis added that, because it invokes the individual right of everyone to decide whether to seek their return under occupation, "it should be noted that in the preamble to the Charter of Fundamental Rights of the European Union, entails responsibilities and duties towards both third parties and the human community and future generations ".

"The only way to alleviate the dilemma facing the refugees is for the state to help, in order to partially address the long-standing loss of occupied property and the consequent financial hardship. In this direction, as DIKO, we have prepared relevant legislation, which will strengthen the toolbox of the State with the compensation for the loss of use of the occupied properties. "We expect the views of other political forces to be submitted together," he concluded.