Ayia Napa/Protaras: They were found with drugs and prevented their arrest - Foreigners were found lying on benches

Barrage of arrests in the province of Famagusta within 24 hours 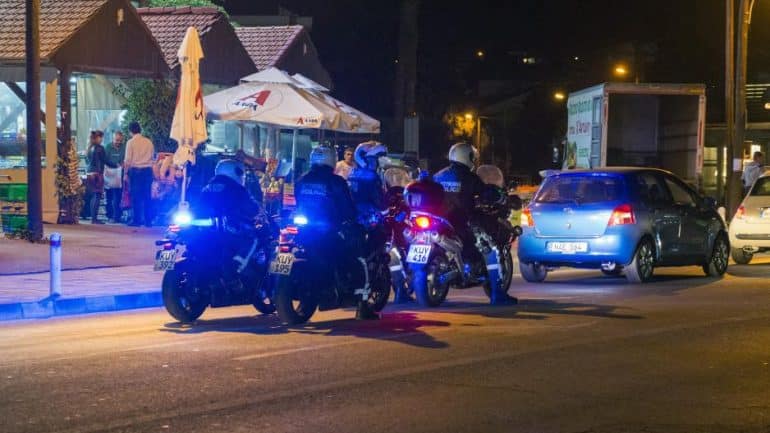 The police arrested 11 people during their daily checks in the tourist areas of Protaras and Ayia Napa between the dates 22/8/22-23/8/22.

Specifically, in the context of police checks to crack down on illegal employment and employment as well as illegal stay, members of the Police found a 19-year-old foreigner working without holding an employment contract sealed by the Labor Department.

As his employer, the 19-year-old indicated a Greek Cypriot who, after being called to the Agia Napa Police Station, was accused in writing of the crime of illegally employing the 19-year-old.

On 22/8/22 at time 2255 members of the TAE Famagusta arrested a 34-year-old third-country national for the spontaneous crime of indecent act in a public place. In particular, the 34-year-old was spotted walking around Ayia Napa with his pants and underwear slightly down and urinating in a public place in a way that publicly displayed his genitals. The 34-year-old was taken to the Police Station of Agia Napa, where he was charged in writing and released to be summoned later before the Famagusta District Court.

On 23/8/22 at 0050 hours, members of the TAE and OPE of Famagusta spotted a 39-year-old British tourist wandering around Agia Mavris Street in Agia Napa in an obvious state of intoxication who was causing concern and talking nonsense. When the members of the police tried to approach him and check him, he attacked them, shouting. Immediately the 39-year-old was arrested for the spontaneous offenses of obstructing an instrument in the execution of its duty, drunkenness and restlessness.

He was then taken to the Ayia Napa police station where he was charged in writing and released to be summoned later before the District Court of Famagusta.

On the same day and time at 0025, members of the OPE Famagusta, following an intelligence assessment, stopped for investigation two British tourists aged 38 and 39. During the search, in the possession of the 38-year-old, cannabis plant material weighing 3,0784 grams and a plastic grinder with traces of cannabis were found. The 38-year-old was arrested for the self-inflicted offense of unlawful possession of a Class B controlled drug and possession of paraphernalia specially made for the use of a Class B controlled drug.

In a subsequent search of their rooms, a pack of cigarettes was found in the room of the 38-year-old, which contained a quantity of cocaine weighing 0,1 grams.

The arrested were taken to the Ayia Napa police station where they were charged in writing and released to be summoned later before the Famagusta District Court.

Also, 6 arrests of third-country nationals were made for the crimes of vagrants and vagrants. Specifically, on 23/8/22 and around 0310 hours, the mentioned foreigners were spotted in the courtyard of the church of Agia Napa, lying under benches, they were homeless, begging and living without the proper means of maintenance. From the tests carried out, it was found that 5 of them are political asylum seekers, while the last one was found to be illegally in the territory of the Republic of Cyprus after his application for political asylum was rejected. All those arrested were taken to the Ayia Napa Police Station and taken into custody. They are expected to appear before the District Court of Famagusta within the day.