AMMOCHOSTOS 1974: "One left and another came and I was bleeding - A fourteen-year-old baby"

Shocking testimony - "I will take the rapes by Turks to the grave, my children are the only joy" 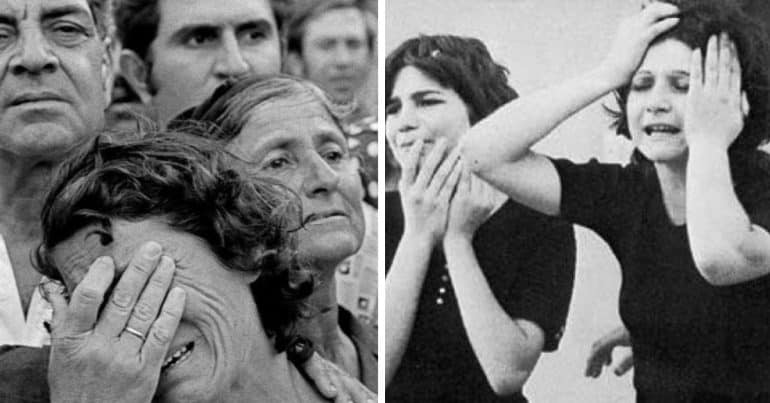 A whole 48 years have passed since the black that summer of '74. M...from an area of ​​Famagusta was then 14 years old when she suffered the brutality of the Turkish soldiers who raped her. Today, 62 years old, Maria says that that summer forever blackened her soul and outlook on life.

A young girl then lived carefree in her village and dreamed of the future. Dreams that were trampled and marked in black colors her later life. Today, a mature woman declares that what happened at the hands of the Turks, she experiences every day all these years.

"The years may have passed but what I suffered at the hands of the Turks, I live every moment of my life. In my sleep and in my wake. A living nightmare that haunts me everywhere, wounds beyond healing," she sobs.

She speaks quietly and softly with tears in her eyes because she doesn't want anyone to hear her. "None of my family except my mother, who died, knows about the rapes. I kept it well hidden and will take it to my grave. It's something that fills me with shame," he confesses.

Arriving in the free areas, at the age of 16 she was engaged to a neighbor and married two years later. He has three children, two sons and a daughter. "I wanted a lot of love and understanding from my husband, things I didn't get. We had differences, we broke up in the end", he notes.

Her children gave her the reason to live, fight and fight to raise them. "I wanted to give them everything they need to be happy. I worked hard at a thousand jobs to raise them, to educate them, to make them useful people in society. My children were the only joy I had in life," he says.

Today she is enjoying the fruits of her labor. Her children are all rehabilitated and she has two grandchildren who love her very much. “I'm happy to see the whole family coming home, now that I'm alone, my grandchildren hugging and kissing me. I feel like I've accomplished something in my life. I raised them and now they live happily ever after. I don't want anything bad to happen to them," he says.

In all these years that have passed, she says, she tried to put aside her own experiences and the psychological consequences they had, finding the strength to give love to her children and to those around her, lightening the burden on her soul.

An unbearable burden, he confesses, which he partially managed to overcome by finding refuge in God. "I had to be caught somewhere. No one knew what I went through, to talk to them, to get it out. I turned to God and the Virgin Mary, who helped me stand on my feet. I have them by my side, day and night. They helped me to raise my children, to live."

Her course in the past years has been difficult. The imprints of time and hardship are strongly etched on her face which has a sadness.

Today he no longer works. Her health is the priority, for which she is fighting. "I have my children near me and that gives me strength. With them, I can overcome everything," he says.

He regrets that he did not receive the appropriate education to have a better life. After all, it was the period after the rapes and the uprooting and the difficult finances of the family, which did not allow her to continue her studies, as she would have liked.

The issue of her and her children's financial survival over the years has been difficult. He worked hard changing jobs repeatedly to make it. For three years now, she has also been receiving an additional allowance approved by the government for female rape victims of the invasion.

Talking to her, she tells me that every Summer, the anniversary of the invasion puts a knife in her heart. "Everything wakes up inside me, I cry, I am tortured. I relive those horrible moments and my soul blackens. It's a nightmare that never ends."

She is silent for a while and tears are flowing from her eyes. He remembers.

"My father was a cattle breeder and he didn't want to leave his animals when the evil broke out, so we were all trapped as a family.

We went out into the orchards, outside the village. There were about a hundred of us there, four days in hiding. Night was becoming day. They were throwing flares and they knew we were hidden. We could hear the tanks on the road coming and going non-stop. They dropped leaflets on us from a helicopter, with half of Cyprus painted white and the other half red, telling us to surrender or they would kill us.

We entered the village with our hands up. We saw people killed on the street. They gathered us in the school yard. They were pulling us here and there. They separated men from women, babies, the elderly over sixty, put them in school rooms. They loaded prisoners into two trucks. My father was taken prisoner.

They took me, my mother and my six-year-old sister with other women to the last houses in the village. From the first night they came to count us. They caught up with me and other crows and took us into the pitch-black fields. My mother was pulling me but she was being beaten with the stock. They pulled me by force, outside away. One left and another came and I was bleeding, begging God to help me, screaming, a fourteen-year-old baby. They were having fun and taking us back. I listened to the women who were thinking of leaving the kitchen gas open so that we could kill ourselves, to escape this torture.

Every night the same things. We hide in the attic of the house, but they found us and pulled us by the hair. This horror continued for two or three months. To catch a crow in a barbaric way, to take it to the fields, to have one and the other come, to laugh with each other and to see them, to shout, to be burned with cigarettes. My hands are marked by their cigarettes that they put out on me."

But now you have your children, your grandchildren who make you happy, I mention it to change the mood of the intense charge of emotions.

"Yes, that was the only joy I had in my life. I want them to be always happy, that nothing bad happens to them in their lives, and I will live peacefully with them. I don't want anything else from life," she says, wiping away her tears.