Occupied Famagusta: The pseudo-state is proceeding with the gradual opening of public buildings 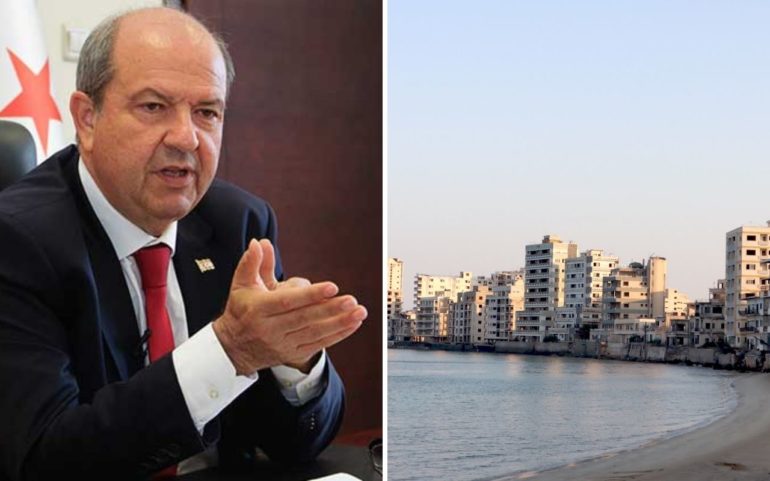 The so-called "mayor" of Famagusta, Ismail Arter, spoke about the gradual opening of the public buildings located within the closed area of ​​Varosi, repeating that the person who will pass today at 12 noon exactly in the area that has been opened, will be given a gift.

He was speaking at an event marking the 2nd anniversary of the opening of part of the fenced area which will start today at 12 noon and end at 2pm. At the entrance of the venue there will be the band of the "security forces" which will play for a while and then it will move to the "tea garden", as they call the garden of the Greek High School of Famagusta, where it will give a concert, as Mr. .Arter, for 2 hours.

The gift they will give, he continued, to the person who will spend at 12 noon in the space that has been opened in Varosi will be meaningful, it will be significant because they want October 8 to be significant, as he said.

Ismail Arter said that the "municipality" of Famagusta has a contribution to the technical part concerning Varosi, it participates in studies that will give life to the city. Varosi, he continued, was full this summer. "753.000 visitors is not a number to be underestimated. Our work is appreciated. These studies will continue to grow." As the "municipality" of Famagusta, he said, they will beautify the places that belong to the public.

Ersin Tatar: "A new era has begun with the opening of Varosi"

The old period ended in Cyprus with the opening of Varossi and a new era has begun, in which the opening of part of the walled area of ​​Famagusta and the two-state solution policy are in harmony, said Ersin Tatar.

As transmitted by the occupied territories, the Turkish leader spoke to the illegal "Bayrak" about the two years since the opening of Varosi, saying that "it was a late step of the Turkish Cypriot people and the politics of two states", adding that the Turkish Cypriot "people ” aims to secure the recognition of his own “state”, the “tdvk”.

Mr. Tatar congratulated the new "ambassador" of Turkey to the occupied territories, Metin Feizioglu, because his contribution to the initiative to open Varossia was great, as he said.

They turned, he continued, Varosi from a ghost town into a city you can visit for its sea and culture.

There are close to 500 I/C applications, Mr Tatar said, to the "real estate commission" – which he described as an effective domestic remedy – claiming their properties in Varosi. He appealed to those who have legal rights to claim through this "commission, which is not contrary to international law, as he said. God first, he said, very soon the "committee" will be fully operational and "make arrangements according to justice and law. Those who end up returning can come and reclaim their property. However, we must never forget the rights and laws of EVKAF. In this context, we will see some innovations in the new regulations."

He thanked those who have helped in the opening of Varosi which was done by Turkey and the "municipality" of Famagusta, saying that in the context of the opening, "the next step will be to open some public buildings for service".

The Turkish leader said that the opening of Varossia was a vision of Rauf Denktash and became a reality with the support of the Turkish President, Tayyip Erdogan.

Referring to the Turkish President's statements about İHA and SİHA being stationed in the pseudo-state, Ersin Tatar recalled that during his own "prime ministry" the airport in Lefkoniko had been given to the occupying army and he considers it normal that it should now become more "effective".

"We see the presence of the Turkish army on the island as a deterrent, they are still in favor of the continuation of peace, after all, this was also the slogan of the 1974 peace operation", he claimed, referring to the invasion, adding that "since then until today, there has been peace on the island".