Unfortunately, the fate of some people is very harsh and very unjust. 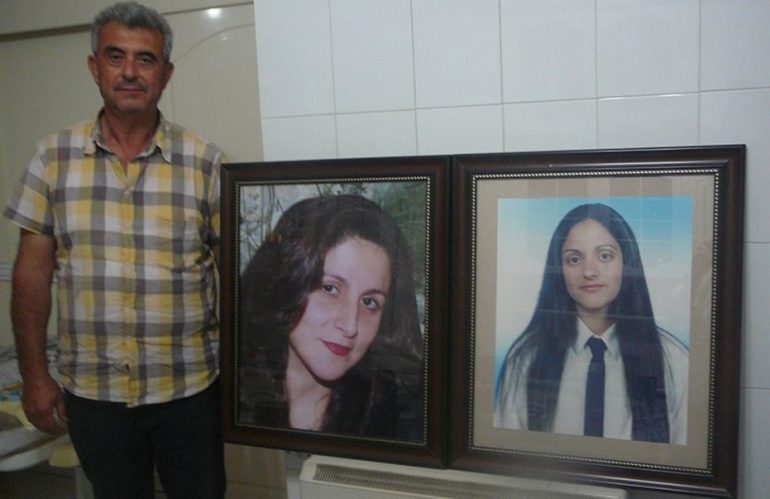 Unfortunately, the fate of some people is very hard and very unfair. It gives the right to die to enter and leave their home uncontrollably and to ruin their soul.

In the case of Mr. Costas Michael, fate was very unfair to him, he hit him mercilessly. This man has experienced the tragedy more than any other man in this place.

We dreamed about the future and our children, but fate brought them differently

In fact, the story of this man praises the power of the human soul that transcends the hard and painful impasses, the deep wounds caused by death.

Through the love of his children, relatives, friends and grandchildren, he managed to accept his new reality.

"I was born on 12/11/1960 in Avgorou and I have 10 brothers. Although we were a large family, I don't remember having a difficult childhood. On the contrary, it was beautiful without any special deprivations for the time.

At the age of 22, I met my wife. Argyroula was 18 years old and had come on holiday with her family to Cyprus. Her parents are from Avgorou but immigrated to England long before she was born. We fell in love and in 1983 we got engaged.

In 1985 we had our first child, our Happiness. One year after Pantelis and four years later, Kyproula. I felt happy and lucky to have such a beautiful family. Argyroula was a very special creature. She was a good wife, a good friend, a housewife but also a very good mother. She was an English teacher and had her own tutoring center. She did a master's degree when we all had three children, she was really a very worthy woman.

We dreamed about the future and our children, but fate brought them differently. She wanted to play us a game of her own, very strange. He let death do its own thing.

One morning Eftychia called me from school, she was sick and I went to pick her up. We went to the doctor but he sent us to do other tests. We had to go to different doctors and it took two months until we found out what my daughter had. She lasted only six months and "left" for the big trip on her birthday. He was born on May 8, 1985 and "left" us on May 8, 2003. In the morning we went to the hospital with the cake and we surprised her, but because life is the one that makes the biggest surprises, in the afternoon it cooled down in my arms.

She was the one who always gave us courage and was angry every time she saw us sad. She was such a beautiful and so smart girl. She was an excellent student but also a good athlete. She was the leader of the volleyball team and in fact with several victories in her assets. She was especially beloved at school and in the village.

At one point during her hospitalization, we met a father. We went often and saw him. His words gave us strength and courage every time. We hadn't told Happiness. Basically, our daughter had neither seen nor heard of Father Basil.

But even the father had never seen our daughter. At one point we asked him to go see her at the hospital and when we took him, she looked at him and said, "When I get out of the hospital I'm going to see Father Basilio" and the father asked her, "Do you know who I am?" » when he replied no, then he said, "I am Father Basil who you want to see."

Although the doctor informed me that there were only a few days left for Happiness, I was hoping, I was waiting for a miracle to happen but unfortunately…

There is no greater pain for a person than the death of his child. The earth was lost under my feet, the light and all hope. My wife kept taking her picture and stole it. Nothing could stop her but also comfort her.

Friends and relatives persuaded us to have another child. Another baby would change our psychology a bit and would definitely keep Argyroula's mind busy for several hours so that she would not suffer so much.

Really, our psychology changed a bit when Argyroula gave birth. She was a little girl and together we decided to call her Happiness, in memory of our daughter. Unfortunately, we learned that our baby was born with a heart problem. He couldn't stand it and died after 25 days, just as we managed to baptize it in the air.

We mourned again and my wife lost more and more of her strength and courage every day. Until the final blow hit…

At one point I saw a light in my room but I also felt someone trying to grab my hand.

The cursed disease that took my daughter away from us, knocked again on the door of my house. In 2006, Argyroula was diagnosed with cancer. In England the doctor told us that there was no way he could not be completely cured but unfortunately…

It got to the penultimate chemotherapy but couldn't do the last one. Her heart was dangerously weak and the doctors decided that she should only stabilize. We returned to Cyprus and started her treatment here on the island. However, her heart could not bear it and in August 2007 she "left" to meet our daughters. I felt completely lost, I closed my eyes from the pain that was literally twisting my head. I didn't want light, there was no light. I was locked in the house for hours, I didn't want to see or hear anything. I lost so much in this life but I had to find strength, I had two more children. Two angels who suffered just as much, who did not rejoice in their mother and sisters. They did not enjoy the carelessness of their childhood and adolescence.

I fought and managed to find the strength to continue through the love and support of my children, relatives and friends. The whole village was next to me, I felt their love and support strongly. My sisters were always by my side. But my grandchildren were the ones who really managed to give me courage and strength.

At one point I saw a light in my room but I also felt someone trying to grab my hand. It was a few months after the death of my Happiness, I know it was her.

I miss them so much, I would give everything to see them even for a while, to hug them, to kiss them again.

I know that all three are Angels close to God. They definitely see us from up there and watch us. "