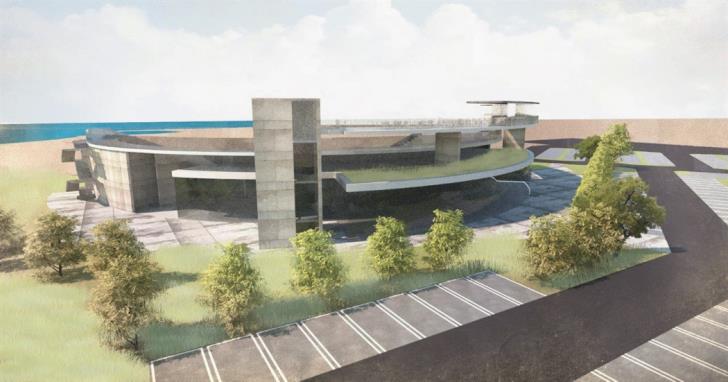 The intention of the Municipality of Ayia Napa in the next few years to become a cradle of production of important cultural events on the island, which aim to attract foreign tourists, said in his statements to "FILELEFTHERO" the mayor of Ayia Napa, Giannis Karousos.

This impressive building complex, he added, will meet all modern specifications and requirements for this category of buildings. Specifically, it will include an 2.200-seat amphitheater with an outdoor stage, an exhibition space, an indoor event and meeting room, all the necessary ancillary spaces as well as a cafeteria with an impressive view of both the stage and the sea.

The amphitheater, he continued, is expected to be a place of culture of super-local importance and will satisfy the demand for quality venues that are missing from both the province of Famagusta and the whole of Cyprus. It will be a valuable element for the implementation of the long-term strategy of the Municipality in order to solve chronic problems of tourism. Including Cyprus in the tourist map and in this category of tourist destination. In the context of the well-known effort made by the Municipality for some years now to achieve at some point a rise in the global scale of tourist destinations. A goal which, in order to be implemented, according to research-study of the municipality, it is necessary to carry out some important projects. Such as e.g. the Amphitheater, the Sculpture Park already under construction in the Cabo Greco area, and the underwater sculpture park, a project that is also maturing to be realized.

Describing the promotion of the Agia Napa amphitheater as one of the largest, if not the largest on the island, Mr Karousos added that the process dates back to 1990, when the study for the location of an open-air amphitheater in Ayia Napa began. After examining the suitability of various sites, its location was initially chosen in the area of ​​Cape Greco. However, during his tenure, the city council decided to change the location, take a comprehensive study of the project and propose to the government its creation in the Kokkines area, next to the existing Municipal Stadium, where the Sports Center will be built in the future. Ayia Napa. A proposal that was accepted by the competent ministries and the Government, which will finance the project.

This space, Mr. Karousos stressed, has many natural advantages, with its intense natural slope, proximity to the center and the residential area of ​​Kokkines, but also the panoramic view to the sea that it offers. With the completion of the Sports Center, the facilities will operate in synergy, having common ancillary facilities and infrastructure.

The open-air theater in 2021 is ready

The mayor of Ayia Napa also stressed that with the establishment and recognition of the events organized in the municipality (the Annual Festival, the Medieval Festival and the Youth Festival), the need to erect an outdoor courtyard and never an amphitheater is more cultural tourism. With the increase of the quality and the high attendance of the events of the municipality, the need for a modern, fully equipped space that hosts them was intensified, G. Karousos also mentioned.
During the architectural design, he concluded, the aesthetics and quality of the space, the harmonious integration in the environment, the synergy with the future construction of the Sports Center and the universal access of the space were given priority. The panoramic view will be the dominant element, so that the project "will be an unprecedented masterpiece in Cyprus".

The project is expected to host the first festivals of the Municipality of Ayia Napa until the summer of 2021, said G. Karousos.