In Athens, the mayor of Ayia Napa - "Together we are developing a Cultural Activity" 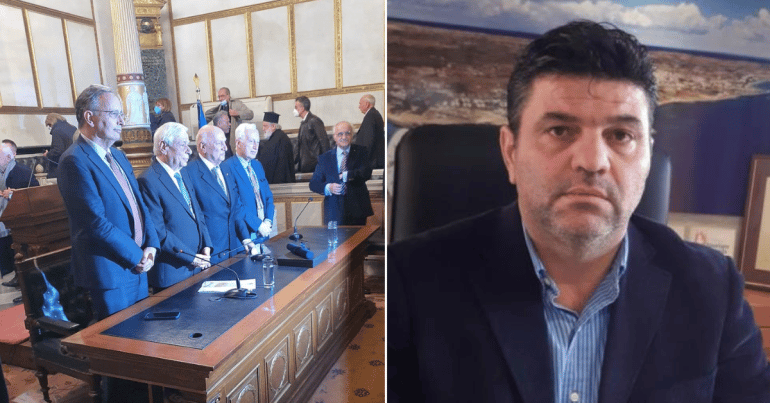 The Mayor of Ayia Napa, Mr. Christos Zannettou, attended the welcoming session of the former President of the Hellenic Republic, Prokopis Pavlopoulos, as a Regular Member of the Academy of Athens

The Mayor of Ayia Napa, Mr. Christos Zannettou, is currently in Athens, where last Monday (December 19, 2022) he attended the Athens Academy and attended the reception session of Mr. Prokopios Pavlopoulos, former President of the Hellenic Republic and Honorary Professor of the Law School. of the National and Kapodistrian University of Athens, in the chair of "Public Law" in the XNUMXrd Class of Ethics and Political Sciences, as a Regular Member of the Academy of Athens.

As is known, the former President of the Hellenic Republic was elected a Regular Member of the Academy of Athens during its Plenary meeting on October 13, 2022 for his rich and high-level writing and teaching work, which made him a prominent scholar of Public Law and for politics his career which culminated in his elevation to the highest office of the Greek State, which he served from 2015 to 2020 as President of the Hellenic Republic, leaving his own stamp as a prominent personality who enjoys International Recognition and Appreciation.

During the event, there was an address by the President of the Academy of Athens, Mr. Antonios Regakos, a presentation by the Academician, Mr. Apostolos Georgiadis, and the honored Mr. Prokopis Pavlopoulos spoke on the topic of "Institutional Dimensions of the Constitutional Enshrining of Civil Liability of the State. The Fluctuations of the Dialogue of Theory and Jurisprudence".

Mr. Zannettou told the staff on his fb account that it was a great honor for him to attend this very important event and expressed his satisfaction with the fact that the Municipality has developed in recent years a channel of communication with political actors of Athens where a Cultural Activity is being developed with them, which in the future will strengthen ties for further cooperation and for the fact that Ayia Napa's relations with Greek Cypriots are now a given.

The Mayor of Ayia Napa, Mr. Christos Zannettou, will also be present, on Wednesday, December 21, 2022, at the Cypriot Home, where he will welcome the event entitled "Seferis and Cyprus" organized by the Greek Cypriot Union (E.K.E).