DERYNIA: The funeral of the hero Panagiotis Xanthou was held (IMAGES) 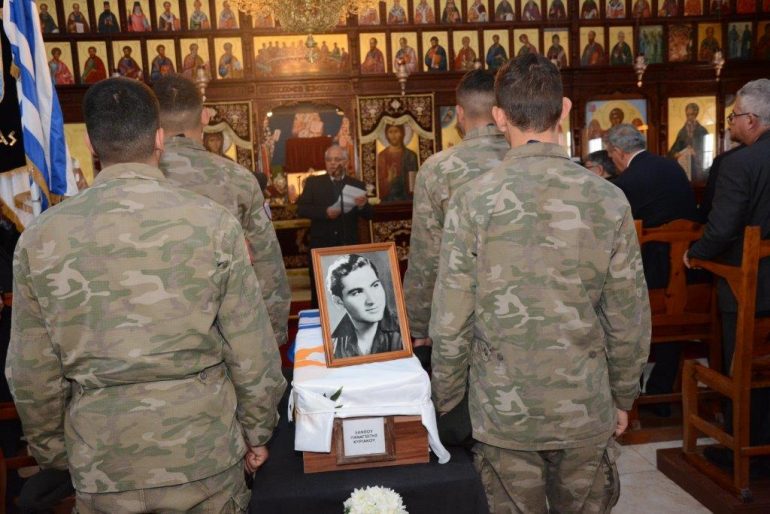 The funeral of the hero of the Turkish invasion 27, Panagiotis Xanthos, from Agastina Famagusta, a former resident of Trachos, was held in the presence of a large crowd, last Sunday, January 11, at 1974 am, from the Church of the Apostle Barnabas, in Deryneia.

The bones of Panagiotis Xanthos were found in a mass grave in the village of Agastina and were identified by DNA method.

The Government was represented by the Presidency Commissioner for Humanitarian Affairs and Overseas Affairs, Fotis Fotiou.

Panagiotis Xanthou was born in 1938 in Trachoni, Kythrea. According to the Commission of Inquiry into the Missing, he was last seen on August 21, 1974. He was married with 3 children. His bones were found in a mass grave in Agastina and identified by DNA.

Fotis Fotiou: In 2018, bones belonging to only 10 people were identified

The dangers in view of the stagnation that prevails in the field of locating relics in the occupied areas were mentioned by the Commissioner of the Presidency, Fotis Fotiou, noting that in 2018, bones were found that refer to only about 10 people while more than 830 are still missing.

Mr. Fotiou spoke on Sunday at the funeral of Panagiotis Xanthos, in the church of Apostolos Barnabas, in the settlement of Deryneia, whose few bones were found in the period 2013-2014 in a mass grave in the area of ​​Agastina.

"It is tragic that efforts to provide answers to families tested for so many decades for the fate of their loved ones have unfortunately reached a critical juncture," he said.

The dangers, continued the Presidential Commissioner, "are now visible in view of the stagnation that prevails in the field of locating relics in the occupied areas".

This is indicated by the data of the work of the Commission of Inquiry on Missing Persons, he said, adding that "in 2018, bones were found that refer to only about 10 people, at a time when more than 830 cases of our missing are still missing."

"Without a substantial change in Turkey's policy, the tragedy and pain experienced by families will continue," he said.

Mr. Fotiou assured that "from our side we will continue our honest and sacred struggle in cooperation with the relatives of the missing to clarify the fate and the last case of our missing". For us and for the families, he said, "it does not mean nor do we accept that the delivery of some small bones, as in the case of Panagiotis, is a complete and documented clarification of his fate."