DERYNIA: The funeral of the previously missing Pieris Vereis (IMAGES) 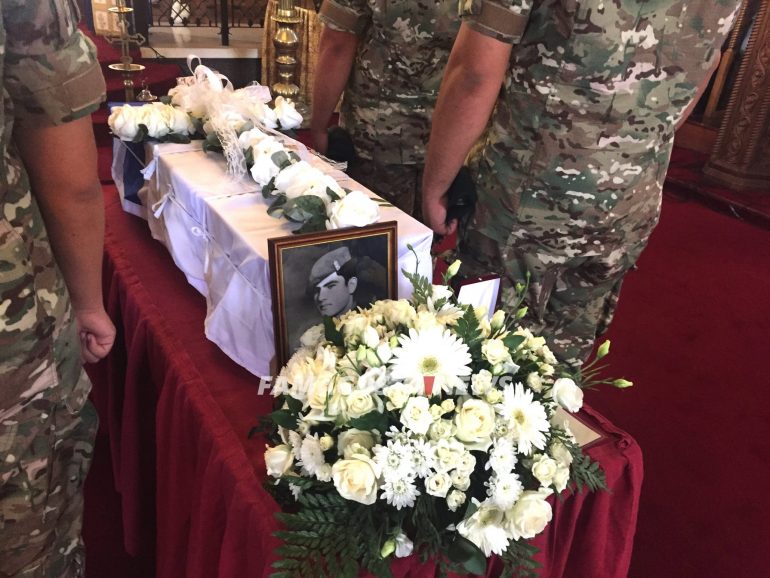 With a delay of 45 years, the Cypriot land welcomed in its bowels another hero of the Turkish invasion. This is the then 22-year-old Reserve soldier Pieris Vereis. His funeral was held at the Church of All Saints in Deryneia.

Heroically fighting at the age of twenty-two and on the day of the second phase of the Turkish invasion, the reserve soldier of the 173rd Artillery Squadron of Pieris Vereis fell.

Vereis, along with other soldiers, ended up in a house in the area of ​​Mia Milia - Voni, after a relevant order to retreat the positions of the National Guard. There she was located and cold-bloodedly killed by the Turkish invaders in front of the frightened eyes of the owner and her children.

Part of his bones were found two years ago in a mass grave very close to the house where the barbaric execution of Pieris and the other soldiers in the area of ​​Voni took place within the framework of the D.E.A. program. His bones have bullet wounds, including one in his head. Funeral service, today, was delivered by the Presidential Commissioner Fotis Fotiou.

The funeral service was held at four in the afternoon by the Holy Temple of All Saints Deryneia, headed by Archimandrite Augustine Kkara.

This is the funeral speech of the Presidential Commissioner Fotis Fotiou:

"With feelings of awe and deep emotion we gathered here today at the Church of All Saints in Deryneia to pay our last respects to another of our compatriots who fell in favor of altars and hearths defending the freedom and territorial integrity of our homeland.

We bid farewell to Pieris Vereis of George and Helen with due honors and pray to the Most High for the rest of his soul, reliving the nightmarish hours our homeland experienced in the summer of 1974 with the treacherous coup and the Turkish invasion that followed destroying the island. us. He sacrificed himself in the unequal and betrayed battles against the hordes of the Turkish Attila and wrote in indelible letters his own name in the Pantheon of Our Immortals.

The occupation, the colonization, the dead, the missing, the trapped, the encroachment of our saints and saints, the violent expulsion of a third of our population from their homes and property, the attempt to falsify our history, are great wounds left by Attila in our homeland. Wounds that, due to Turkish intransigence and negativity, have not yet healed and remain open, despite the efforts of the Republic of Cyprus to claim the rights and human rights of its citizens.

But the most tragic aspect is our missing. Pieris Vereis' parents passed away years ago, his father George 25 years ago and his mother Eleni 4 years ago without being able to guide their only child. They died complaining, bitter and anxious about the disappearance of their child, as is the case with many other parents, but also wives and even children of missing people who complete the cycle of life with unanswered questions about the fate of their loved ones.

With us in this sanctuary, however, are his three sisters, Eva, Anastasia and Chrystalleni, as well as their own children and other relatives who, of course, mourn together and certainly feel great pride in the heroism and self-sacrifice he showed. their beloved brother honoring his homeland and his mission.

Pieris Vereis was born in Deryneia on July 7, 1952. He was hardworking, kind and dear to all his fellow villagers. He loved his community and always helped her voluntarily. She was raised in a family environment with principles and values. Before the Turkish invasion, he worked in an alcoholic beverage factory and at the same time helped his father with his agricultural work.

With the general mobilization on the day of the beginning of the Turkish invasion, he was classified as a reserve in the unit that previously served his term, the 173 Squadron of Anti-Terminal Artillery, which was based in Karaolos, Famagusta. It was placed in the Third Artillery, which on the same day received an order, together with the Second Artillery, to go to the area of ​​Mia Milia. Only the First Artillery Brigade remained in the Karaolos camp, waiting for instructions for its own mission.

The men of the Third Artillery, together with Vereis, when they reached their destination, were shot and took battle positions in the area of ​​Mia Milia - Koutsoventi.

In this area, the men of the unit remained throughout the first phase of the invasion, but also in the period that followed until the start of the second phase.

At dawn on 14 August, the start of the second phase of the invasion, Turkish troops launched a major and coordinated offensive against National Guard positions in the area, using a large number of tanks, their air force and other heavy weapons. Fierce but unequal battles ensued.

The men of the National Guard tried to hold their ground but the action of the Turkish Air Force and tanks was so fierce that the National Guard's line of defense could not withstand the weight of the attacks and broke up. As a result, a retreat order was issued, which could not be organized and coordinated. Turkish warplanes and air force were constantly on the move.

We must note, never to forget, that the great disaster caused by the Turkish invasion, unfortunately, was also contributed by the disorganization of the National Guard due to the betrayal of the coup.

However, there were many officers and men of the National Guard who showed unattainable heroism in response to their duty and mission.

Pieris, along with a number of other soldiers, ended up in a house just outside the village of Voni. Shortly before the next day, three vehicles were seen with armed Turkish soldiers approaching the house. A number of soldiers immediately abandoned it in the midst of storms. Pieris was not seen leaving the house and has not given signs of life since.

It is noted that the Turkish soldiers broke into the house, and immediately shot the remaining soldiers in front of the frightened eyes of the owner and her children.

Part of his bones were found two years ago in a mass grave very close to the house where the barbaric execution of Pieris and the other soldiers in the area of ​​Voni took place within the framework of the program of D.E.A. His bones have bullet wounds, including one on his head.

To all those who have been sacrificed and set an example for their love and contribution to the homeland, we reverently close our hearts, assuring them that we will never stop fighting for the justification of their sacrifice.

For a Cyprus that is truly free and free from occupying armies, as well as from guarantees and invasive rights of other countries, for a Cyprus, a place of prosperity and co-creation of its inhabitants in conditions of freedom, security and democracy.

We are fighting and seeking a solution to the Cyprus problem that is in line with the decisions and resolutions of the United Nations, as well as with the principles and the acquis of the European Union. A functional and sustainable solution that reunites our country and ensures the future of Cypriot Hellenism at the end of this eastern Mediterranean.

We are going through a critical period with the escalation of Turkey's challenges to the sovereign rights of Cyprus in the area of ​​our exclusive economic zone, and with threats and blackmail for Famagusta in the context of the implementation of a "Beta" plan, according to extreme positions of Turks. and Turkish Cypriot representatives.

The President of the Republic has expressed our readiness to enter into new negotiations from the point where the previous ones were interrupted, according to the parameters of the framework of the Secretary-General of the United Nations.

But it must be understood by Turkey and make it clear to everyone that any new attempt to find a solution through negotiations cannot pay off under the provocative and illegal actions of Turkey, as well as the pressures and blackmails of the whole. side.

Forty-five years have passed since then and we continue to bury our young men. The tragedy of the missing, the martyrdom and uncertainty that their families experience every day continues. Despite our best efforts, more than 820 families are still searching for answers about the fate of their loved ones.

The analgesia shown by the occupying power for almost half a century continues. Turkey refuses to cooperate in pointing to mass graves set up by its troops after collecting the dead from the battlefields. He denies access to Turkish military records and refuses to provide information on bone movement from the original burial sites to others.

I want to state and make it clear that without the effective and sincere cooperation of the occupying power, there can be no progress in efforts to resolve the tragedy of the missing.

For our part, we are doing what is possible and we will not stop fighting for the verification of the last case of our missing person.

Today, we are writing the epilogue of the tragic stories of a worthy child of our homeland.

Pierre's parents, George and Eleni, who passed away with the misfortune of verifying his fate, would be proud of their Levantine today.

Dear and respected relatives, sisters of our hero. My favorites are Eva, Anastasia and Chrystalleni.

You should feel proud of the legacy that the man left you, not only in you, but in society and all of us. A legacy that gives you the highest honor and the responsibility for justifying his sacrifice.

I wish the end of the long-term agony for the fate of your man, to calm your soul and alleviate your pain.

We say goodbye today to Pieris Vereis and we thank him with gratitude for his memory.

Pieris fell on the ramparts of duty and to him, as well as to all those who gave their lives for the freedom and independence of Cyprus, we owe a lot. We owe our existence as the Republic of Cyprus as well as our dignity as free people.

May the memory and glory of the Soldier of the 173rd Anti-tank Artillery Squadron, Pieris Vereis, George and Helen be eternal.