They protested the non-functioning of the Famagusta District Council 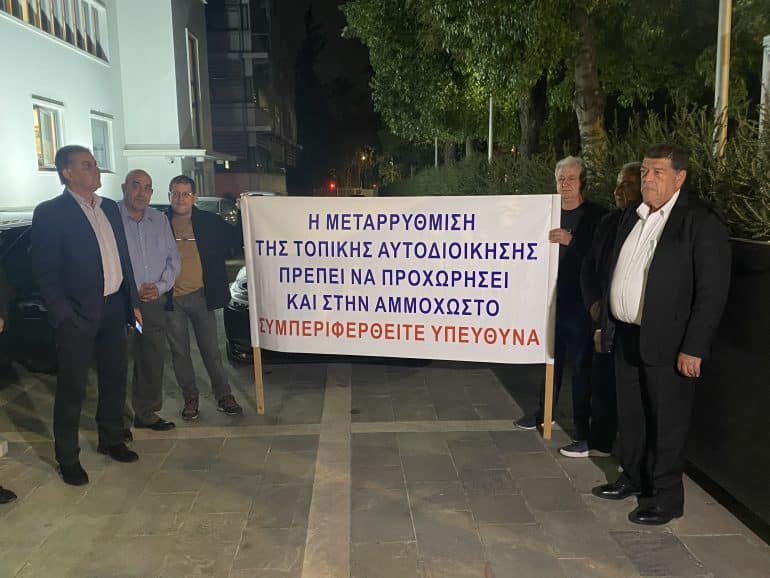 Outside the Parliament building, representatives of the municipalities and communities of the free Famagusta gathered late on Tuesday afternoon, expressing their demand that the House of Representatives proceed with the settlement of the pending decision regarding the decision to determine the head of the coordinating council for the reform of of Local Government (TA) in the province of Famagusta, as provided by the legislation passed last March.

A delegation of the Municipalities of Paralimni and Deryneia, as well as the Community Councils of Frenaros and Aheritos, was in Nicosia at the time of the Plenary Session of the Parliament for the state budget of 2023, in order to remind the gap that is pending in the course of the reform of the TA. in Famagusta District, as the legislation passed nine months ago remains inactive, since it provides that the head of the District Council will be the metropolitan municipality of each cluster, which makes Famagusta a special case, where the metropolitan municipality is occupied.

As the Mayor of Paralimni, Thodoros Pyrillis, pointed out in his statements, the Parliament will be closed for two months, January and February, and will open in March, which postpones any decisions to next April. "Other provinces are a year ahead in preparing for the reform and we are still waiting," he added and emphasized "we are not second-class citizens."

He called on the Parliament to meet and take any decision, in order for the provincial organization to function in Famagusta as well, pointing out that "the effort of the Parliament not to meet, says something". Answering a question about the difficulties faced by the local authorities of Famagusta due to the ongoing backlog, he explained that since the passing of the reform until today, the temporary coordination council of the Provincial Organization cannot be convened, so in essence the reform for the province can be implemented Famagusta.

Asked to comment on the intentions of the local authorities in the next period, he said that they would expect to see reactions in the next few days and would decide on their actions accordingly.

Speaking on behalf of the Municipality of Deryneia, Christodoulos Pantelis noted that there is a bill of the Ministry of the Interior, which provides that the temporary chairmanship of the coordinating council will be exercised by the Mayor of the municipality with the largest population, therefore normally this must be put to a vote in order to proceed with the meetings of the coordinating committee.

The President of the Community Council of Frenarous, Michalis Hatzigiorkas, responding to a question about the fact that only a portion of the Municipalities and Communities of the free Famagusta are represented in the protest, said that he cannot know the motives of the absence of other local authorities of the province, but he emphasized that the their own presence "demonstrates the concern about the non-functioning of the T.A. reform. in the province of Famagusta".

He added that the members of the Parliament "avoid positioning themselves for their own minor party interests and if they do not legislate until March when the Parliament meets again, they will once again appear inferior to the circumstances", as he said.