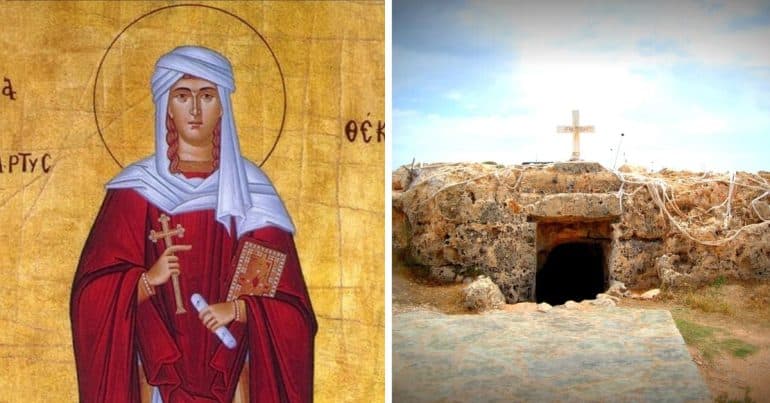 The Church honors the memory of Saint Thekla, the first martyr and co-apostle, on September 24. The worship of Agia Thekla is inextricably linked to Sotira and the religious feeling of its inhabitants. After all, the entire beach front of the Municipality of Sotiras bears the name of Agia Thekla, while September 24th is a local holiday and holiday for the Municipality, with the holding of a large religious festival.

On the afternoon of Friday, September 23, 2022, at 6:30 p.m., the solemn Vespers will be celebrated in the celebratory chapel of Agia Thekla Sotiras.
The following day, Saturday, September 24, 2022, 6:30-9:30am, the Orthros and the High Priestly Divine Liturgy will be celebrated, presided over by His Eminence the Metropolitan of Constantia and Famagusta Mr. Vassiliou.

In the afternoon of the same day, at 6:00 p.m., Vespers and the Prayer to Agia Thekla will be celebrated.

The chapel of Agia Thekla

On the beach, south of Sotiras, is built the chapel of Saint Thekla, the protomartyr and co-apostle. The chapel is located on the border between the Municipalities of Sotiras and Ayia Napa, within the municipal limits of Ayia Napa, however religiously it belongs to the Church of Sotiras.

Several of the portable icons have been painted in the occupied monastery of Barnabas the Apostle near Salamis.

West of the modern chapel there is an underground carved temple dedicated to Agia Thekla. It is probably an ancient tomb, which was converted into a temple in the middle Byzantine period or during the years of the Frankish rule, since above the entrance it bears an engraved cross. The pilgrimage of Agia Thekla is also noted in the handwritten Portolano map of Johannes Oliva (1622) with a wooden church.

The ruins of an early Christian basilica north of the current church with maliciously destroyed mosaics have been identified in the area. The site seems to have undergone extensive quarrying.

Agia Thekla functioned as a women's monastery in 1937. Then cells were built on the ruins of the old monastery at the expense of Michael Phasaria from Sotira. The escort was made by the nuns Makaria, Makrina, Agathi, Anna and Christofora. Later they moved to the Monastery of Agios Georgios of Alamanos near the village of Pentakomos.

A large religious trade fair is held on September 24, the feast day of Saint Thekla, the first martyr and co-apostle. In Agia Thekla, the Divine Liturgy is also celebrated on the Monday of the Holy Spirit. At the end of the liturgy, the congregation goes in procession to the rocks of the beach. There the priest reads the passage from the gospel that mentions the bitterness in the Sea of ​​Galilee. At the end, the dance sings the tropes of Pentecost and the other priest who is in the boat a few meters from the shore, throws the cross into the sea and is retrieved by the swimmers. Then the procession returns to the temple, a litany is performed and a prayer is recited.

The holy first martyr and co-apostle Thekla came from Iconium in Asia Minor and was the daughter of Theoklea. When he was eighteen years old he heard the Apostle Paul preach in the neighboring house of Onesiphorus and was attracted by his words.

She was engaged to someone named Thamyris, whom she left to follow the Apostle Paul to Antioch in Pisidia. There he suffered many and various tortures, from which he emerged unharmed by the grace of God. From Antioch she went to Myra in Lycia to meet the Apostle Paul and from there to Seleucia, where she took refuge on Mount Calamon, where she slept peacefully at the age of ninety – it is said that she split a stone to receive it.

The Church commemorates her on September 24.