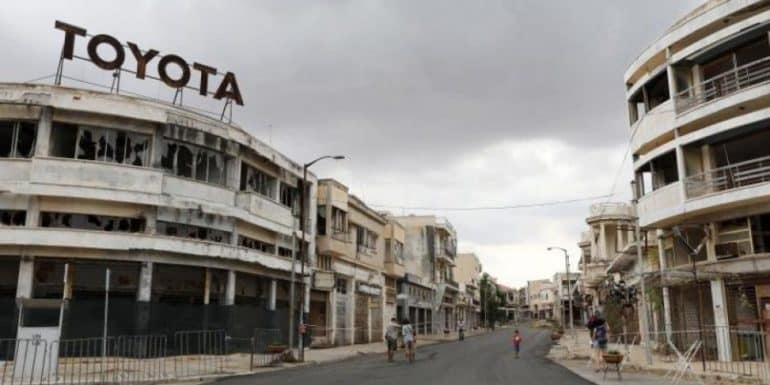 Continuation of Turkey's provocative and illegal actions in Varosi, which violate the status quo in the closed area and the resolutions of the UN Security Council, are, according to the Mayor of Famagusta, the announcements that the pseudo-state will proceed with the opening of municipal - public buildings in the area . After the new statements, the Municipality requested meetings with the Ambassadors of the 5 permanent members of the UN Security Council and already received a positive response from the French Ambassador.

In his statements to KYPE, Simos Ioannou noted that on the occasion of the anniversary of the illegal declaration of the pseudo-state and the two years since the opening of part of the closed area, it seems that the regime is preparing to make new announcements, "as it does at regular intervals ». He speculates that they will renovate some public or municipal buildings, such as the municipal market, located on Evagorou Avenue, or other buildings and municipal schools, which are at the beginning of the enclosed area.

"They will continue the salamization that they have started for two years. They definitely want to exploit the area, for now touristically, to bring financial benefit to the pseudo-state and then to colonize the area by building tourist units and similar facilities with tourism, in cooperation with companies in Turkey," he said. The Mayor added that regarding the 3,5% pilot area to which legal owners could return, "they have been seeing for months that they have done nothing."

The Municipality of Famagusta, said Mr. Ioannou, has also requested the new statements about Varosi, meetings with the Ambassadors of the countries of the five Permanent Members of the UN Security Council, and they have already received a positive response from the French ambassador. They will also have a meeting with the Slovak Ambassador at his own request, he added.

On October 23, a delegation from the Municipality of Famagusta will go to London where they will have contacts at the Foreign Office and the House of Commons, where an event will be held - as every year - organized by the association of Famagusta residents of Great Britain. Simos Ioannou mentioned that possibly, in consultation with the High Commission of Cyprus in Britain, they will have other meetings during their stay in London.

He also mentioned that a delegation of the Municipality will go to Brussels, in consultation with the MEPs, a visit that the President of the EP will place under her auspices.

"We will also ask the state to take the necessary actions," he said. Mr. Ioannou also noted that they have prepared and will send a letter to the CoE on the occasion of the decision of the Committee of Ministers of the Council on the case of Titina Loizidou, how this affects the cases concerning Varosi. "Because even if there is a violation in this area, then it means that Turkey will be completely free to do whatever it wants."

Shy about the gift

Asked to comment on the announcement by Ersin Tatar that tomorrow, on the two-year anniversary of the opening of the closed area of ​​Varosi, they will give a gift to him/her who passes at 12 noon exactly, the Mayor of Famagusta said that he feels shy and anger. "It is ridiculous in a politically civilized world. These things don't happen. They are provocative. They want to show the image that they are dominant in the area and not the legal residents."

Municipality and agencies will continue the fight

When asked how the people of Famagusta react to all this, if they are used to it, are they indignant, angry, the Mayor of Famagusta replied that they are not used to it "and they will never get used to it". The day before yesterday, he said, the organizations and unions of Famagusta had a coordination meeting in Larnaca with a large participation and many young people, who were born after 1974. "They are all disappointed with the turn that things took, but they are also determined to continue the struggle, to justify the case of the whole of Cyprus, but also of Famagusta".

The enclosed area, he noted, is only 16% of the entire municipal boundaries of Famagusta and there are areas there today, which have the same fate as Kyrenia, Lapithos, Karavas, have been settled and developed. "Simply by saving the enclosed area, which is supported by SA resolutions, there is a possibility to save the rest of Famagusta as well." If the territorial is lost, everything will be lost, said Mr. Ioannou.