The funeral of the missing Kleitos Kleitos from Lefkonikos was held 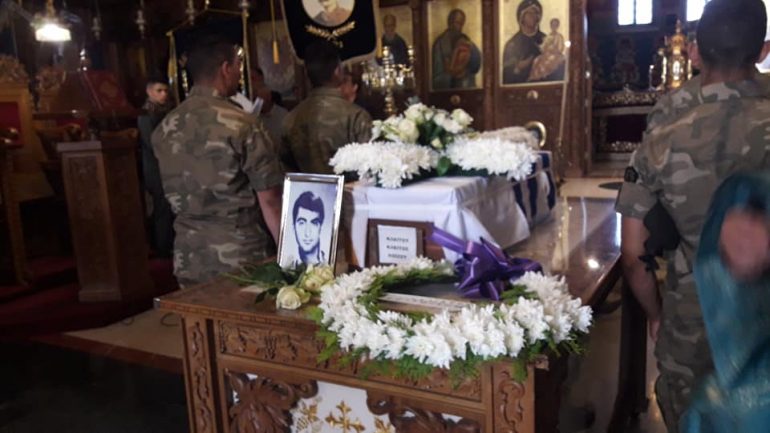 The funeral of the missing Kleitos Kleitos from Lefkonikos, whose bones were identified by the DNA method, took place yesterday from the Holy Temple of Agios Panteleimon in Makedonitissa, headed by Archimandrite Panaretos Kyprianou.

The state was represented, according to an announcement by the Municipality of Lefkonikos, by the Commissioner for Volunteering, Giannakis Giannakis, while party representatives were present, AKEL MP from Famagusta, Nikos Kettiros, former MP from the National Police of Famagusta, and Isidoros Makridis his comrades-in-arms from 399 T.P. in Bogazi, many classmates of the hero from the High School of Lefkonikos, representatives of the Committee for the Missing and a large number of people from Lefkonikos and other areas.

At her funeral, the Mayor of Lefkonikos, Zina Lyssandrou Panagidis, referred to the life of Kleitos Kleitos. He was born on April 12, 1956 in Lefkonikos. He was the second child of Loizos and Pezouna Kleitos, Sonia's brother.

When Kleitos finished the third grade of Lefkonikos High School, the family moved to Varosi for the children to attend classes at the Hotel "Xenia". Kleitos wanted to become a receptionist and, in parallel with his studies, he worked in a hotel.

In January 1974, he enlisted as a volunteer in the army. The last time his mother saw him was after the coup. He was worried and took a taxi from Varosi to Bogazi, where his camp was.

He has been missing since that day. Between the first and second invasion, his parents and sister came and went to Mia Milia and asked if the soldiers had seen him. They were desperately searching. No one had seen him. So they lived in complete ignorance until they announced that they were missing.

After the burial in the Tomb of Makedonitissa, a trisagion followed for all the heroes of the Municipality of Lefkonikos and the laying of wreaths by the relatives of the heroes and the principles of the town.