LIOPETRI: Desperate cry of a mother - "They told me that they will take my child and they threw my house" (VIDEO)

Desperate cry of a mother from Liopetri - Her house was demolished because it was "unsuitable" - "The problem with the welfare office has been going on for years. Is this house considered suitable for a disabled woman and a 16-year-old baby?' 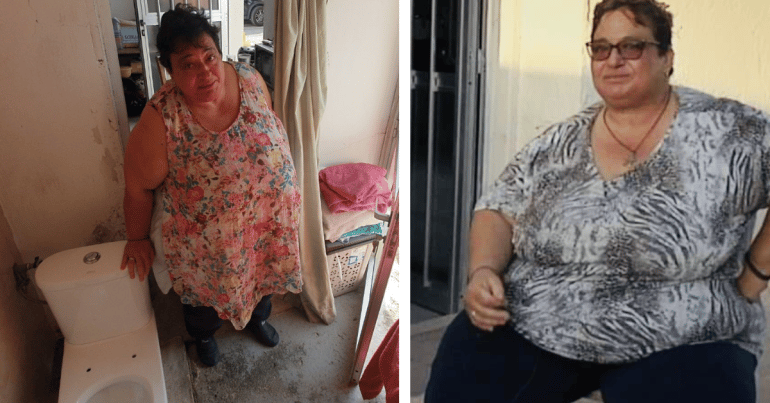 Journalist Theodora Kyriakou brings to light yet another well-hidden story of a woman whose many blows in life are presented through her own soul testimony.

In the interview that follows, the endless difficulties that the woman lives can be seen, which culminate in her daily life, and specifically in her own house, in which, as she mentions, a person with her own peculiarities cannot live, let alone a 16-year-old child.

The problems in her life started early. As he typically states, "I come from a large family of six sisters and three brothers. My mom and dad were poor. My dad was a cancer patient, my mom was blind, kidney disease. At six years my older brother died, at nine years my younger sister died 54 years, at 40 days my younger brother died 45 years old, my older sister is disabled, the other sister has a problem with her light, the other has a heart problem and we have one brother left who is in Australia".

She analyzed the difficulties that both she and her child face, living in a house that is not accessible to her needs, "Until the baby was small, he helped me, now he has grown up. To take a bath, to put on my clothes, I need help. I can't bend over. The osteoarthritis over the years that I have had it has eaten away at my bones. I have no cure.

"I was forced by the welfare office, after they issued a warrant, to take my child from me"

Stating that "The problem with the house and the welfare office has been going on for years", Mrs. Christina analyzes in detail the issues that led her to live in this house. In particular, he states that "I had my problems in my other house, but it was my house. We had our rooms, we had our kitchen. I can't sit in my chair and cook. I can neither cook nor sit, there is no room. I'm afraid to take a bath because I'm afraid I'll fall.

The problem with the home and the welfare office has been going on for years. With the baby I had a problem with the bath. My bathroom had been leaking for 20 years. Then the baby went to high school, every winter I bought nylons and put on top and so sometimes it dripped sometimes it didn't. I was forced by the welfare office, after they issued a warrant, to seize my child, because I want the house for this baby, to force me to leave. We came here telling me to come for two months. Is this house considered suitable for a disabled person and a 16 year old baby? I was kicked out of my house because it was not right for the baby to sleep with me. The baby has been sleeping on the sofa for four years. You come after four years to tell me that you can't build me a house because the welfare office has no money. Since you don't have money, why are you spoiling it for me".

"It took a year for him to understand that I'm not like all the moms, I can't do what all the moms do. We went to a psychologist. Because the baby was watching other moms going to school and I was going with the chair. How to explain to this baby that his mom doesn't want him to be like this. We went to a psychologist. He knows I'll be like this. I explained to him that year after year I will do a little less and walk less than I did last year. Fortunately thank God that he has me as I am now. I wish he would leave me as I am so the little one can grow up.