Diocese of Constantia-Ammochosto: On Friday, the Clergy and Popular Assembly

This year marks 15 years since the reconstitution of the Holy Metropolis of Constantia and Famagusta, in the year 2007. Since then, and with its installation in its temporary headquarters in Paralimni, one of the primary goals set was to connect the residents of the city and province of Famagusta , which today are scattered all over Cyprus, with the work of the Holy Metropolis. Among the various events, which are organized for this purpose, the Clergy and Popular Assembly occupies a prominent position, with a spiritual character and orientation. The clergy of the Metropolis and the displaced clergy from the metropolitan region of Constantia and Famagusta and the province of Famagusta, representatives of the political and local authorities, agencies and organized groups, executives of the parishes of the province of Famagusta and all Famagusta residents are invited to participate in the Assembly.

The Diocese of Constantia and Famagusta is convening this year its ninth Clergy and Lay Assembly. The occasion of the convening of this year's Clergy-Popular Assembly, with the general theme "Hellenism - Uprooting. Asia Minor - Cyprus", provides the commemoration of the 100th anniversary of the Asia Minor Disaster. The general theme will be developed by His Eminence Metropolitan Basil of Constantia and Famagusta in his introductory speech. The main speaker at the Assembly will be Dimitris Kairides, Professor of International Relations at Panteion University, Member of Parliament for the North of Athens in the Greek Parliament, author and analyst of international issues and international current affairs. Professor Kairides will develop the theme "One hundred years since the Asia Minor Catastrophe: Turkish Revisionism and Hellenism today, in Cyprus, the Eastern Mediterranean, the Aegean and Thrace".

The Clergy Assembly will take place on Friday, October 14, 2022 at 19:00, in Paralimni. The Assembly is under the auspices of His Excellency the President of the Republic of Cyprus Mr. Nikos Anastasiadis and His Beatitude the Archbishop of Cyprus Mr. Chrysostomou.

In the context of the Assembly, the Cultural Academy "Agios Epiphanios" will present a photographic exhibition entitled "Memories of Rome - Wounds of Uprooting. Alongside". The theme of the exhibition is presented through photographs, accompanied by historical and other testimonies, which unfold the individual themes of invasion, looting, captivity, destruction, uprooting, uprooting, refugees. The structural element of memory is presented through interactive elements, which contribute to the direct involvement of the visitor in the exhibition. The exhibition will be presented first in Paralimni and then in other areas of the free province of Famagusta. 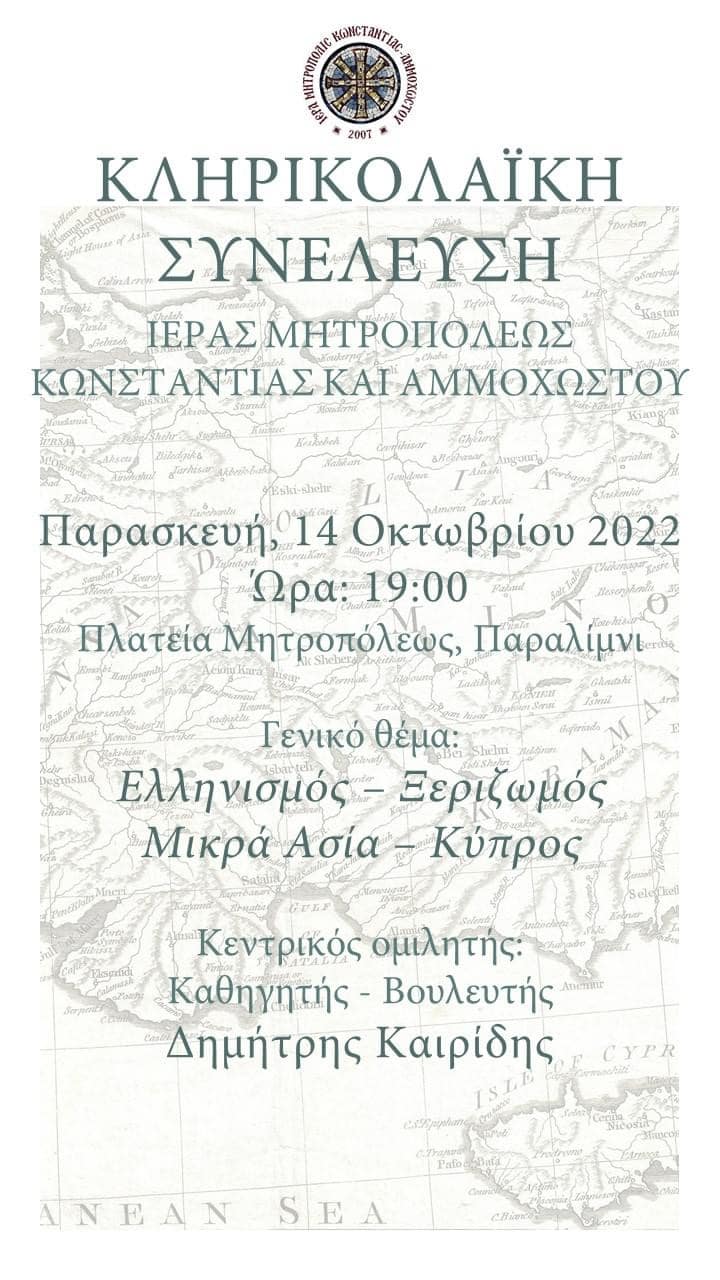