The dance of the vine in Paralimni 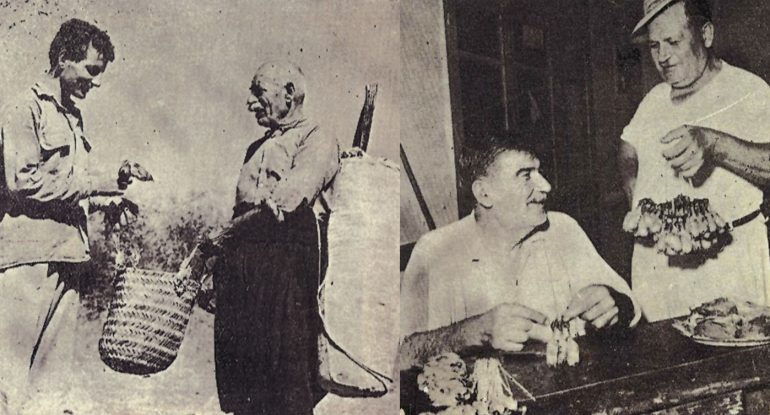 The focus in recent days has been on voting for the amendment by the Parliamentary Committee on the Environment on the Protection and Management of Wild Birds and Hunting Laws. An amendment that provoked the reaction from environmental organizations, the gamekeepers and the owners of the leisure centers. 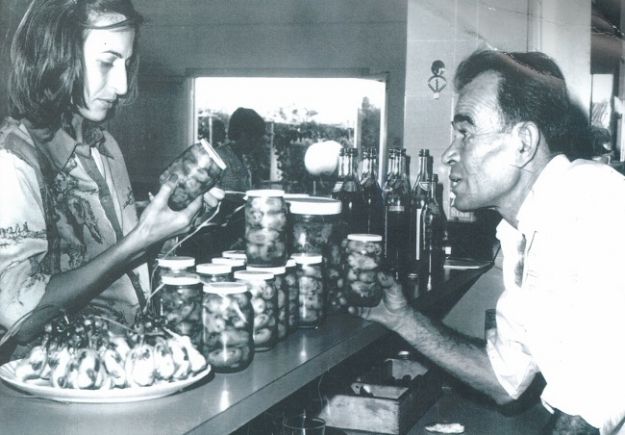 Concerns among leisure center owners stem from the fact that now, according to the law, It will be allowed to eat prey in restaurants provided that they are transported by the customers of the restaurant.. The change concerning the issuance of an out-of-court fine to offenders was also particularly worrying for gamekeepers, as the officials of the Hunting Service will now be in charge of imposing a fine of up to € 2.000 on offenders. The reaction of the Poultry Association, which expressed its disappointment, was strong, noting that the amendment law will not only be counterproductive for the sustainable management of game and wild bird management, but also effective in combating poaching and poaching. birds.

The decades-long endless discussions and legislation on the ban on wild bird hunting cannot ignore the recording of a historic event that took place every year in the province of Famagusta and attracted great interest from both locals and residents of other parts of Cyprus. .

The Ampelopouli Dance was held with the aim of strengthening the Association of the Paralimni Youth Union and began to be organized after 1936.

The secular event of the "Dance of Ampelopouli", as we learn from the folklore study of the historian Panagiotis N. Tsoulias (2010) "Xoverga - a traditional custom", took place every year around the end of September in Paralimni until 1984 with the organization of the Union Paralimniou and was the cosmopolitan event of the region. It was organized in various entertainment centers of the area, while as mentioned in the book, visitors gathered from Paralimni, Famagusta and from all over Cyprus. The main "delicacy" in the dance list of the dance party was of course the grapevines, while from the price list of 1977 we learn that the price of a dozen vineyards was 3,5 pounds.

Andreas Evangelou, former Mayor of Paralimni, recalls that the Ampelopouli Dance was held with the aim of strengthening the Association of the Paralimni Youth Union and began to be organized after 1936, the year in which the current union of the two "Syssini" emerged. , "Love of the People" and "Hercules".

Makis Markou, President of the Paralimni Youth Union for fifteen years and a former teacher, told SIMERINI on Sunday that in the first years the Dance was organized in leisure centers in Famagusta and later in two historic taverns of the time, the tavern and the Odysseus Paralimnitis ". Later, dance parties were held at the community stadium and in recent years at the Association's building.

In the secular events of Paralimni, there were restaurants that specialized in serving grapefruits.

Branded of the time the most important customers

An important element in the secular events of Paralimni was the existence of restaurants that specialized in serving grapefruits. Two of the most important restaurants were "Odysseus" and "Paralimnitis". Mr. Evangelou, a member of a family of owners of the then famous restaurants, describes how popular these taverns were. According to "S", during the months of September to October, during the "vine season", the tavern of their family business was full not only of customers but also of famous people of the time, from Presidents, as he states, to Ministers and diplomats.

Mr. Markou does not dispute the fact that the hunting of vineyards was a significant economic benefit for the people of Paralimni. It was, he said, a supplementary income for a farmer or rancher who owned agricultural land. Nevertheless, as he said, "the vineyards did not make any family rich." There is no doubt that the hunting, trade and consumption of vine children played an important role in the life of Paralimni. The entire social, economic, and even cultural life of the community at that time was greatly affected by the small or large amount of prey. It is worth noting that Historically, the wider area of ​​Paralimni trapped 70% of the pan-Cypriot hunting of wild birds today.. 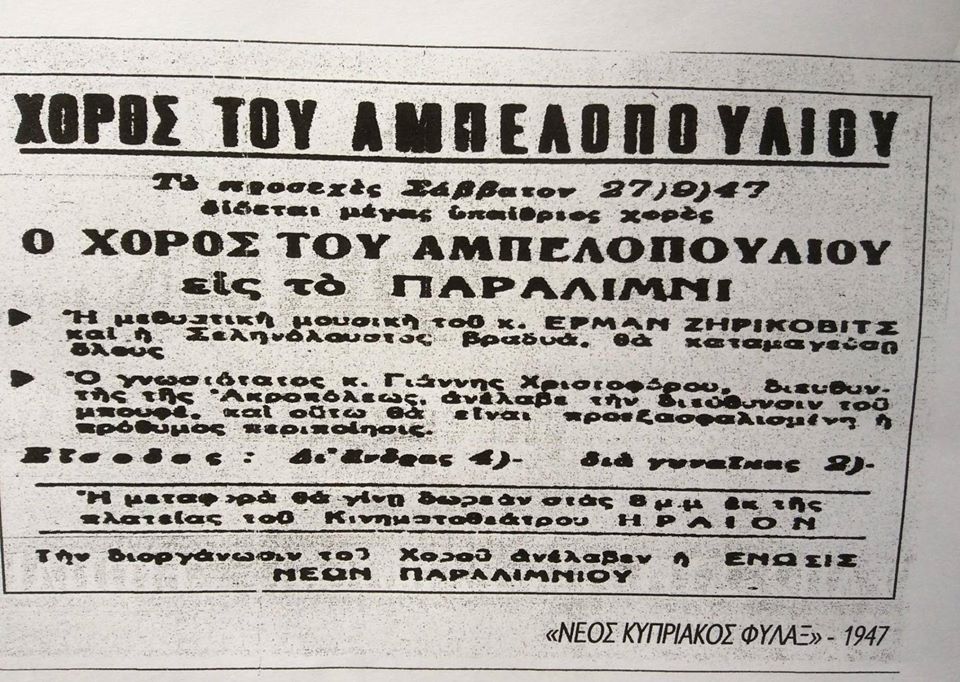 There is no doubt that the hunting, trade and consumption of vine children played an important role in the life of Paralimni.

The poem composed in 1977 by the popular poet from Paralimni, Pavlos Pittatzis, is also well known:

"Paralimnitis is a man
that you are the land of the dumb
the stone in the bread
you can do it
yes misery upon you
to fall in order
you exude your exes
as the birds that pass by,
You set them up, you catch them
you deserve praise "

The way it was traditionally used for trapping was the sparrows. The prey was then sold to the "cammatides" who were responsible for the plucking of the birds and the passing of their beaks by palm leaf fibers, or "barrels" of reeds per dozen. Then the "kammatides" sold their "merchandise" in taverns or households. As residents of Paralimni reported to "S", The trade of grapefruits outside the province of Famagusta was also very common, while the quantities of vinegar-laden grapefruits sent to the Cypriot community of Great Britain were also large.. 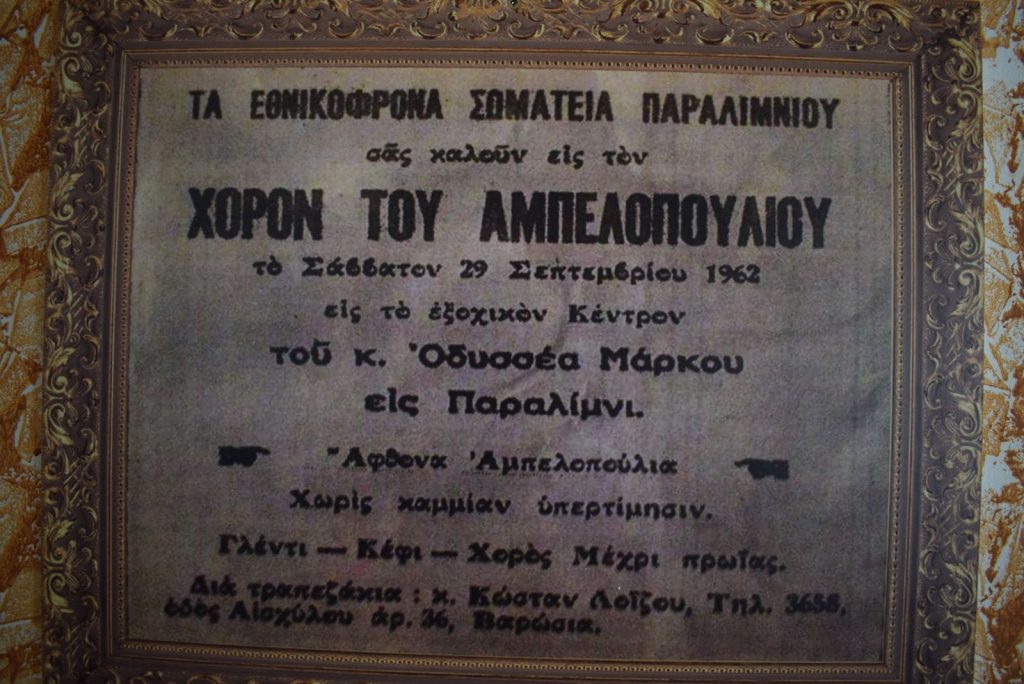 In the recording of this historical-cultural event of the "Ampelopouli Dance" event, there could be no reference to other historical recordings about testimonies, at least from the 16th century, about the hunting and trade of vine children in our country.

During his visit to Famagusta in 1553, the British John Locke reported that the Cypriots had trapped large quantities of vines and kept them in bottles of vinegar and salt, noting that they had sent about 1200 bottles to Venice and other Italian cities. The Italian scholar and geographer of the 16th century, Tommaso Porcacchi, reported in 1576 on the capture of vines and their export as vinegar. Similar was the report of the Dutch traveler Cornelius de Bruijn, who in 1683 noted that in the area (St. Napa-Paralimni) large numbers were captured with spears and then exported abroad. He even states that they were arrested "as we captivate the little birds in our homeland".

Poultry: "The current situation is unacceptable"

According to the Campaign Coordinator of the Cyprus Bird Association, Tassos Sialis, today's amendments passed to the Law on the Protection and Management of Wild Birds and Hunting Laws are a disaster, as he describes them. "That take us back ten to fifteen years, when the Poultry Association had launched its campaign against illegal trapping". According to the previous legislative framework, it was satisfactory, but there was a problem in its implementation. The methods of illegal trapping, outbreaks and networks, as reported by "S", Mr. Sialis has been banned by national law since 1974, a fact that many do not know or ignore.

The place of the traditional foreigner was taken by the net, the sound imitations and other more massive ways of trapping.

The strong reaction of the Poultry Association for the latest amendment of the legislation focuses on the problems that will arise from the relaxation of the legislation for the expatriates since the imposition of a fine of € 200 for every 72 sparrows. At the same time, the Poultry Association expresses its concerns regarding the out-of-court settlement of all offenses, as it warns of the inability of gamekeepers to carry out their work, while on the other hand they note their reaction regarding the serving of game prey in restaurants. whether it is possible to control whether it is a hunting or illegal species. 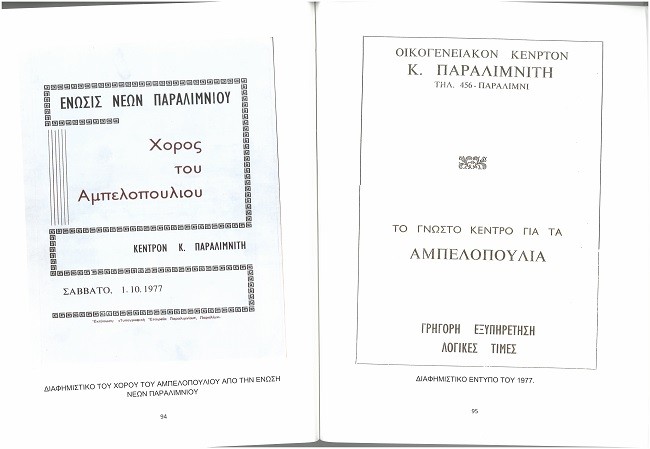 Today, almost thirty years after the last dance party, none of the old stomatours or kammatides is active. The place of the traditional foreigner was taken by the net, the sound imitations and other more massive ways of trapping. The sentences became harsher and therefore the Dance of Ampelopouli, for better or worse, remains a memory in the modern history of the people of Paralimni. Anyone who has provided useful information and experience in this report insists that if the traditional exorcism was allowed and the penalties in other illegal ways became more severe, then, in their view, the problem of mass trapping and the black market would be was solved.

A short story by a scholar of Cypriot music and tradition, Michalis Hatzimichael, is quoted as a short story:
"I stand by the moon,
to catch the moon
to give it to her again
her silly halal shots
her husband to take me. "