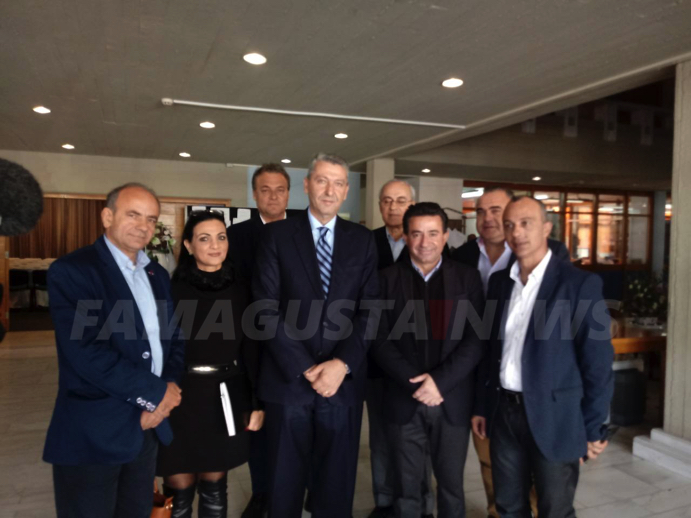 He thanked the members of the Board. of the Tourism, Commercial and Industrial Company of Famagusta, the candidate for the Presidency of the Republic, George Lillikas, who allowed him, as he said, to present his proposals, views and positions "regarding the isomeric development of all areas of Cyprus and especially the proposals for the development of the area of ​​free Famagusta ".

He added that he also presented his proposal for the new model of economic development envisioned, "a model that will be based on the knowledge economy, research and innovation, so that all sectors of the Cypriot economy, and the primary one, can be developed." and the secondary, and to enrich the Services sector on a basis that will allow us to compete in quality and not in prices, since that is the future of the Cypriot economy, because we have the most important capital, which is Our professional staff and that we should use. "

For his part, TEVEA President Petros Petrou described the meeting of the Company's Board of Directors with George Lillikas as "very good", in the context of the initiative "to meet all the candidates for the Presidency of the Republic. We discussed in depth various issues concerning the economy of the free area of ​​Famagusta and other issues that interest all citizens, including the Cyprus and international issues. "

The aggression of Turkey should not affect the energy plans and the economic cooperation of the Republic of Cyprus with the neighboring countries, said the candidate for President of the Republic George Lillikas.

Speaking after a meeting with the leadership of the Famagusta Tourism, Commercial and Industrial Company, Mr Lillikas said he had "repeatedly publicly supported any efforts to develop tripartite or bilateral co-operation with the countries of the region." In these collaborations, there should be a comprehensive planning of a direct medium-term and long-term relationship, if we want these collaborations, which strengthen the Republic of Cyprus and can upgrade its role, to finally acquire content and will not be limited to declarations. "

He added that "it is a fact that Turkey treats the tripartite cooperation of the Republic of Cyprus with a hostile look, with an aggression, because it perceives them as an attempt to isolate it from the region. However, it is a fact that Turkey's isolation is due to its own aggressive and expansionist policy towards all its neighbors, and therefore in no way should we be influenced by any aggression by Turkey regarding the energy plans of the Republic of Cyprus, but and economic cooperation with neighboring countries. "

I believe, Mr. Lillikas continued, that "at the current stage of the energy planning of the Republic of Cyprus, there are the conditions to converge our interests with countries such as Jordan, which require and require our cooperation in the energy sector primarily with Egypt, so that we can meet the needs of Jordan. That is why I insist on setting immediate, medium-term and long-term goals based on timelines that will converge and create common interests, so that tripartite cooperation can truly gain meaning, content and value. "