Who Was King Onesilos of Salamis: The Betrayal by His Philo-Persian Brother and the Legends

The legendary king Onesilos, the Philhellenic revolution, and the "miracle" with his severed head 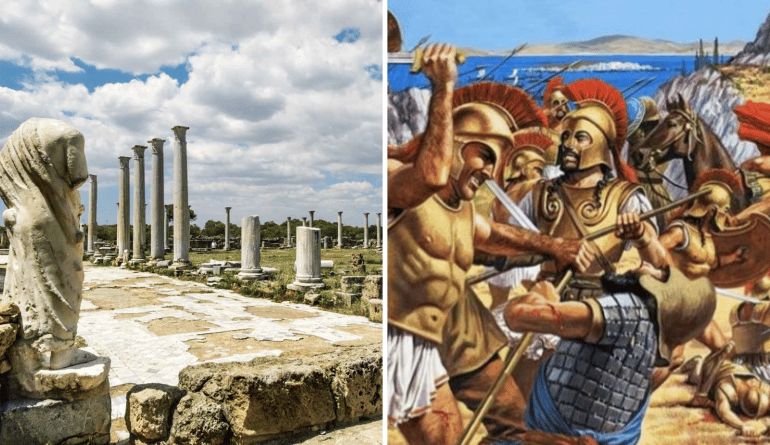 Onisilos, the legendary king of Salamis who, in fact, also gave his name to the historical Society of Sotira Famagusta is one of the most important personalities of ancient Cyprus. Member of the royal family of Salamis, king of this city for a very short time and leader of the Cypriot revolution against the Persians in 499 BC.

According to the information provided by the digital encyclopedia Polygnosis, Herodotus (V, 113.2) mentions Onesilos as the son of Hersius and architect of the revolution of 499:

And elsewhere Herodotus (V, 104.1) defines the genealogy of Onisilos as follows:

Evhelthon is also known from numismatic sources, as the first king of Salamis to mint coins (at least according to the current archaeological data). Onesilos was, therefore, his great-grandson. If all those mentioned by Herodotus successively ascended the throne of Salamis, we have the following kings of Salamis during the 6th - 5th BC. century:

It is not absolutely certain whether Siromos and Hersis were kings of Salamis. On the contrary, Evelthon is attested by coins that have been found, while our Gorgos is also known from his participation in the Persian campaign of Xerxes against Greece.

About the way in which Onesilos dethroned his elder brother Gorgos, who was a friend of the Persians, as well as about his rebellion, we get a lot of information from Herodotus. As this great historian writes, Onesilos was pressuring his king brother to defect from the king of the Persians and side with the Ionians who were preparing for their own revolution and war against Persia. However, Gorgos was not convinced even when the Ionian revolution began, so the pressures of Onisilos had become more persistent. Then the latter decided to take power himself and lead the Cypriots into a revolution. He guarded his king brother and one day when Gorgos left the city, Onesilos mobilized his rebellious companions and closed the gates of Salamis, closing Gorgos from the outside and thus seizing the throne. Gorgos, when he saw that he had lost his city, left Cyprus and took refuge with the king of the Persians, Darius I (521-485 BC). 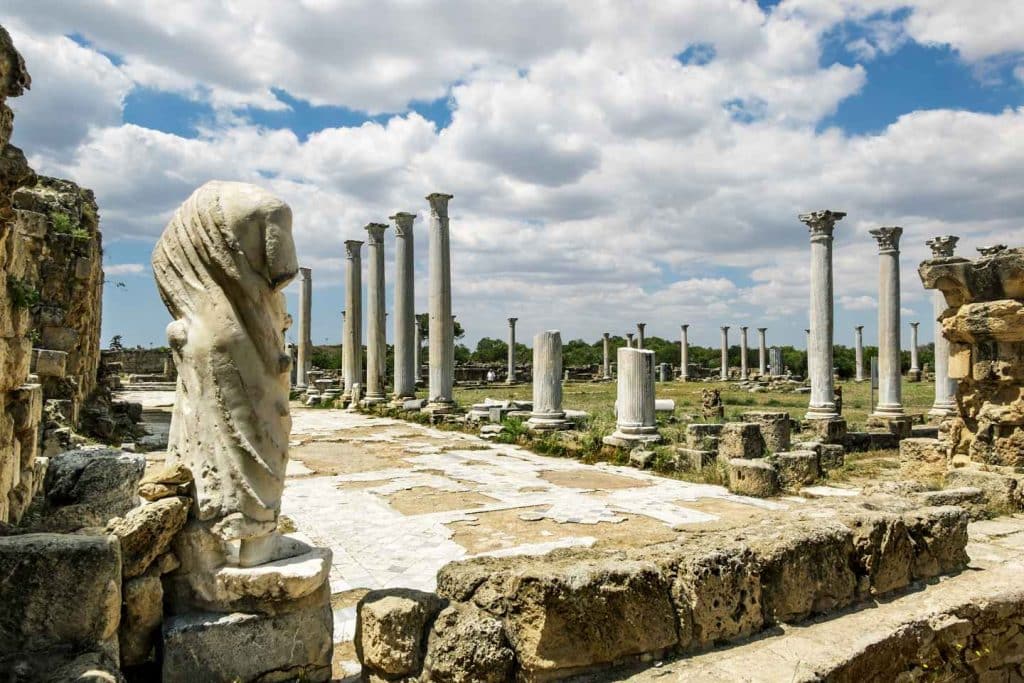 As soon as Onesilos seized power in Salamis, he contacted all the other kings of the Cypriot cities and tried to convince them to apostatize as well, renouncing Persian rule. And indeed, he succeeded in persuading all to follow him, except the king and the citizens of Amathus. Then Onesilos besieged Amathus.

We can therefore consider that the Onisilos revolution of 499 BC. had spread over almost the whole of Cyprus. The attitude of the Amathusians towards Onisilos and the events should not be surprising, nor is it correct to explain (as by many in the past) with theories about "native" and "Eteocypriot" inhabitants and the like. Each Cypriot city-kingdom maintained its autonomy and practiced its own politics, trying to better serve its own commercial, economic and other interests. There was no strong common Cypriot consciousness, since the island was divided into several independent kingdoms. Therefore, the attitude of the Amathusians was the one that, in their opinion, primarily and best served the interests of their city. And Salamis itself was, moreover, pro-Persian just a little before, during the reign of Gorgos, while Kourion, which prided itself on being a building of the Argives, at the most critical moment abandoned Onisilos, returning to the pro-Persian faction, as we will see below. 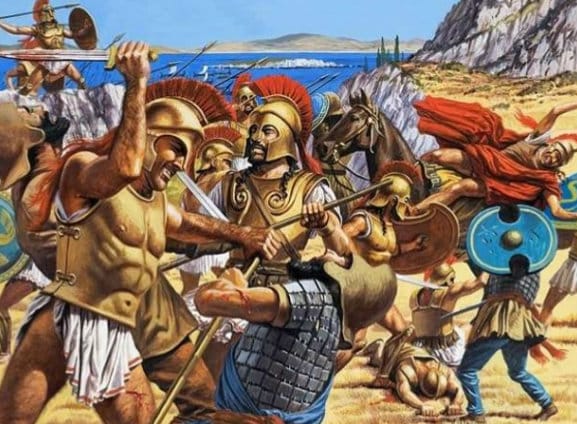 Continuing the narration of the events, Herodotus writes that, while Onesilos was besieging Amathus, the message came that powerful Persian forces under the command of the Persian general Artivius were about to arrive in Cyprus to suppress the revolution. Immediately then Onesilos sent his men to Ionia, asking for the help of the rebellious Ionians. We can of course assume that Onesilos was already in contact with the Ionians, probably even before dethroning his brother. So, as soon as the Ionians got his message, they sent a powerful fleet to Cyprus. At the same time, the Persian forces sailed from Asia Minor to the northern coast of Cyprus where they disembarked and from where they marched against Salamis, and their ships, after sailing around the Karpasia peninsula, also proceeded in the direction of Salamis. The ships in Persian service were Phoenician.

In the meantime, Onesilos returned to Salamis with his forces, who lifted the siege of Amathus, while in this city the other Cypriot forces that took part in the revolution (Soloi, Paphos, Kourion, etc.) gathered. A meeting was held there, as Herodotus writes, in which the Cypriot kings and the leaders of the Ionian forces sent to Cyprus participated. The Cypriots left the Ionians with the choice of either facing the Persians on land or fighting against the Phoenicians at sea. The Ionians chose to fight at sea.

Artivius rode a famously trained horse, which during battle would rise on its hind legs and take down opponents. Herodotus (V 110.1-2), writes that Onesilos had a supporter from Caria, very courageous, who told him to be careful and take charge of either the horse or Artybius himself. The lieutenant said: "My king, I can take either the horse or the general, but I prefer to take the horse and you, as king, face your equal, for if you kill him, the honor will be greater, and if he kills you, the calamity will be less since you will be killed by a worthy opponent۬ so, as a servant that I am, let me take charge of the horse…”.

In the battle, when it soon began, Onesilos faced Artybius. He managed to beat him to death, while at the same time his assistant Caras cut off the horse's forelegs. Thus, at first the Cypriots appeared to be able to achieve a brilliant victory. However, at the most critical moment of the battle, the Kurians led by their king Stasanoras abandoned Onisilos and the Cypriot forces and joined the Persians. Their action was immediately followed by the chariots of the Salaminians. Then things changed immediately, the Persian forces now outnumbered and eventually defeated the remaining Cypriots.

Onesilos, fighting to the end, fell fighting. So did Aristocypros, king of the Solons, while many others were also slain.

In the meantime the battle at sea had the opposite outcome: with the Samians particularly distinguished, the Ionians overwhelmed the Phoenicians. But when they saw that the Cypriots were defeated on land, they withdrew with their fleet back to Ionia.

After the suppression of the revolution and the death of Onisilos, the Persians again raised Gorgo to the throne of Salamis. The Solians, continuing the struggle, resisted the Persians for 5 more months during which their city endured a severe siege. It was eventually overwhelmed by sewers that the besiegers dug all around, under the city walls. Paphos also resisted for a long time, which had also been besieged for several months before being sacked. Thus, as Herodotus writes, after the Cypriots were free for a year, they were enslaved again: 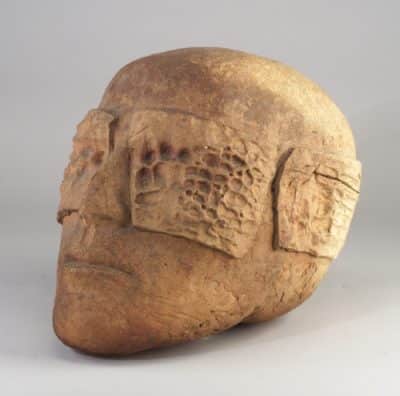 Herodotus also mentions the legend about the head of Onisilos: After his death, the Amathusians cut off his head, in revenge for having besieged them, and brought it to Amathus where they hung it over the city gate. Later a bee nested in the skull of Onisilos and filled it with honey. For this phenomenon, the Amathusians asked for an oracle. The oracle given to them was to take down the hero's head and bury it, and to honor the memory of Onisilos with annual ceremonies and sacrifices. And the Amathusians obeyed.

The personality of Onisilos seems to have been very important. And just the conception of the idea and the effort to unify Cyprus in a single civil-military force, under the conditions and perceptions of his time, was grandiose. Only after many years would the king of Salamis, Evagoras I, attempt something similar. And only after many more years, after the abolition of the institution of kingdoms (312 BC), the Cypriots will begin to acquire a common Cypriot consciousness, when the entire island as a single space will join the kingdom of the Ptolemies.