A model, according to Karousos, is the Deryneia - Sotiras road 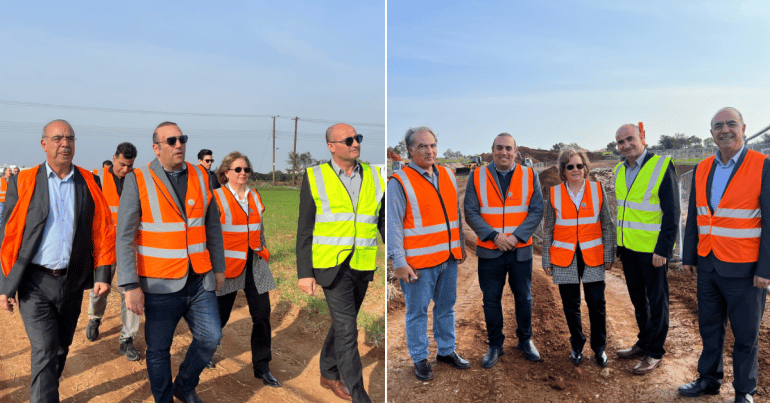 The Minister of Transport, Communications and Works Yannis Karousos described the Deryneia - Sotiras road under construction, with a budget of approximately 16 million euros, which is expected to be completed within 2025, as a model road for road safety and for sustainable urban mobility.

In statements after visiting the Deryneia - Sotiras road, the Minister said that "one of the things that this Government can be proud of is the fact that large and long-awaited projects, which the local authorities have been waiting for and demanding for decades , is under construction, from Paphos to the province of Famagusta".

One of these projects, he said, is the improvement/upgrade of the Deryneia - Sotiras road, with a budget of around 16 million euros, including VAT and a project that the two town halls and the entire province of Famagusta have been demanding for decades.

The project is under construction together with other projects, which are to be implemented throughout Cyprus, such as the Polis Chrysochous - Paphos, Limassol - Saitta road, the Nicosia bypass, Astromeritis - Evrycho. Next month, the construction of the Palechori - Nicosia highway will be signed, the Larnaca - Dekelia road network will be upgraded, while one of our important projects is the Sotiras - Deryneia road, which is under construction, he said. "We are in cooperation with both Municipalities for any issues that may arise or exist, while the Provincial of the Department of Public Works is in constant communication with them", he added.

Responding to a related question, Mr. Karousos said that "it has about 4 kilometers of main road network, plus about two kilometers of secondary road network and includes cycle paths, with a two-lane road network which, where there are right-hand turns, will turn into three lanes, pedestrian crossings, lighting and in general it will be a model road for both road safety and sustainable urban mobility". It is, he added, "a road that will also connect Deryneia with Sotira with a bicycle path, and someone from Liopetri will be able to cycle to Ayia Napa, Protaras, Paralimni, Deryneia and Sotira". He said that "the network will be upgraded and expanded year by year with the future projects planned in the province".

Asked when the project will be completed, the Minister of Transport replied that "it is a 30-month contract, the project started in July and will be delivered within 30 months, there is no delay to date, there will of course be an inconvenience and as we have said many times the suffering goes away, but the works remain".

Regarding the possible suffering of the citizens, he said, "we are in communication with the Mayors of Sotiras and Deryneia, as well as with the citizens who are affected, as some temporary accesses or detours have been planned to help the daily life of the citizens and reduce the suffering to the extent possible."

I am sure, he continued, "that the citizens as they see that the project is progressing will definitely feel that it is an inconvenience that they will go through and when the project is completed in 30 months, their quality of life and the area in general will improve as this project is very important".

The Mayor of Deryneia, Andros Karagiannis, thanked the Minister of Transport "for the enormous efforts" he made for the immediate execution of the urban planning project of the Deryneia - Sotiras road. "It is a project that started with the patience and persistence of the two local authorities and will serve a lot of people because it passes through the People's Market, sports fields, schools and churches and the fact that citizens cannot move freely either on foot or by car cycling, does not make us particularly happy as a local authority," he noted.

He added that when projects are done there is some inconvenience. "The road network brings physical and economic development," he said and noted that in 2025 when the project is completed, everyone will enjoy it. "This particular project is very important because it connects the coastal area with the hinterland and residential and commercial development must also come through the road network," he continued.

In the free province of Famagusta, said Mr. Karagiannis, there are too many tourists who want to visit the hinterland. However, as he said, "Derynia as a rural area is fixed in a local plan of 2003, which must be published immediately because it is not only the road network that needs development but also the local plans".

That's why Mr. Karagiannis noted, "as a critical region, in order to keep our people, we must give incentives related to residential development."

Mayor Sotiras Georgios Takkas stated that "we have been waiting for this project for decades and it is finally being implemented". Since 2015 when the President of the Republic announced the project, after seven years and after the persistence of the Municipal Councils of Deryneia and Sotiras, but also of the government itself, we are now seeing its implementation, he emphasized.

He added that people will now be able to travel safely between the two municipalities, and because there is Deryneia High School and High School, it will greatly help children to go to school even by bicycle. "We are satisfied and really grateful to the government for the construction of the project, because it will improve the quality of life and the safety of the people, since there have been several accidents on this particular road," he concluded.