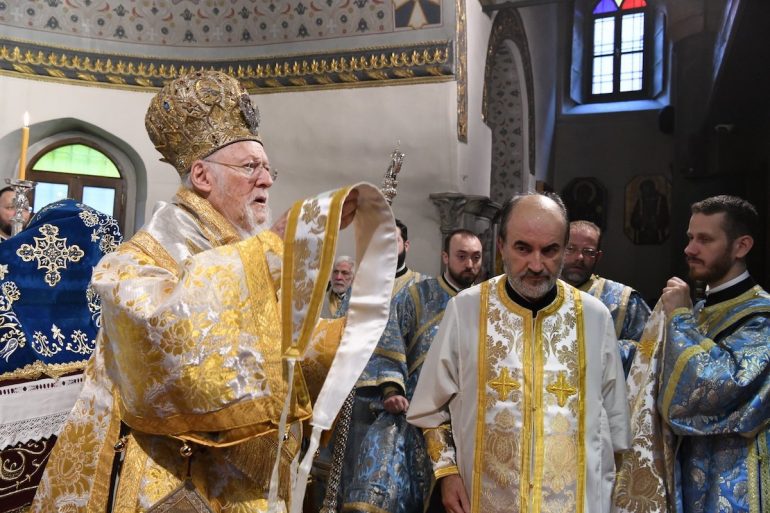 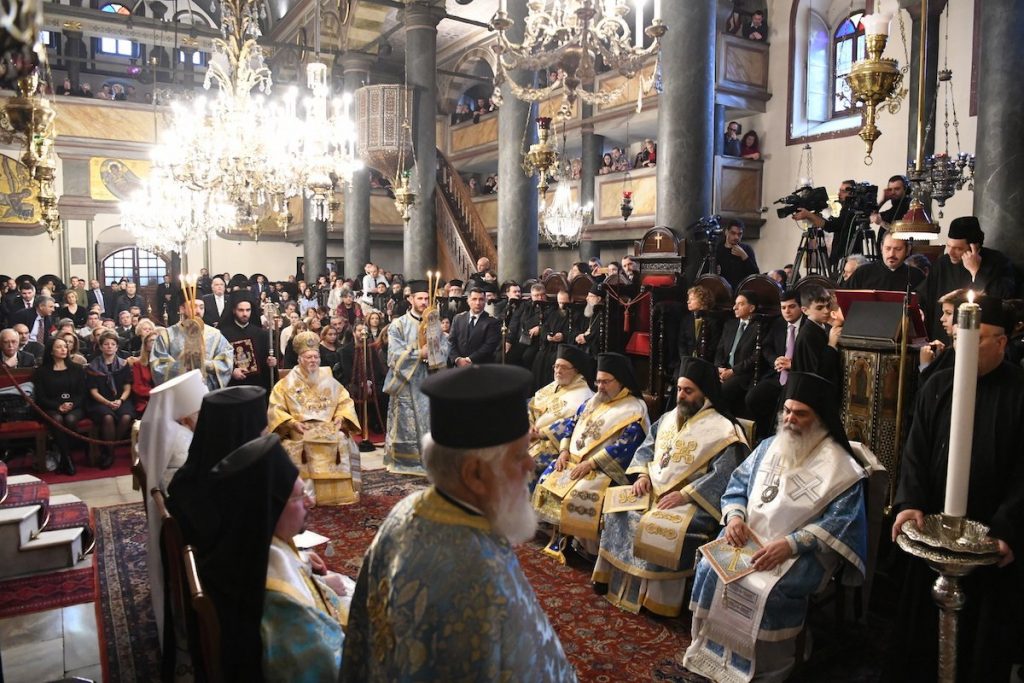 During it, he was ordained an elder by Deacon George Christodoulou from Gialousa, a clergyman of the Church of Cyprus and a teacher in the temple of the Apostle Andrew in the occupied Rizokarpaso.

Before the ordination, His Holiness addressed paternal speeches to Fr. George.

In the ebb and flow of the eminent God, the "Light from Light", in the crowded Church in the Pentecostal Patriarchal Church of St. George the Great Trophy Bearer, we are holding your ordination as an elder today. You are a flesh from the flesh of Megalonisos, a descendant of the historical Karpasia, a devoted and pious child of the Church of Cyprus, ordained a deacon under the Blessed Brother Archbishop of Cyprus Mr. Chrysostom ", said the Patriarch You receive the grace of the second degree of the priesthood, Deacon George, to give the good witness of the Orthodox faith, of hope and love, in the Christian European south, in the Great Cyprus, and especially in the Holy Sepulcher. Andreou, who has been sacrificially serving since 1958 by Father Zacharias, present and co-hosting and collaborating today in Fanario ". 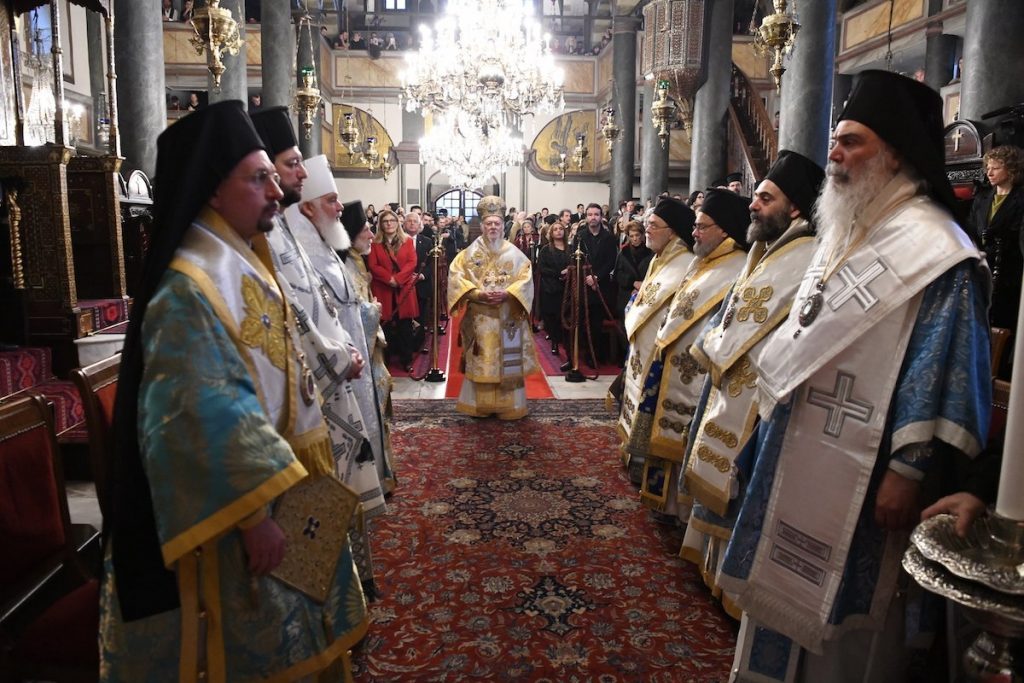 The Church of Cyprus belongs to the choir of the ancient Churches, with internal administrative autonomy recognized by the DG in Ephesus Ecumenical Synod (Canon HD). It is a privilege for you to belong to this ancient Church, which is distinguished both for its unwavering fidelity to the Orthodox tradition, and for its interest and concern for the world and history, giving me the good fight for the defense of the Saints of the Nation. At the northernmost tip of Megalonisos, where you will guard the place and the way of life of freedom in Christ, you will experience intensely the presence of the different. There have always been different religions, different cultures. The great challenge of our time is the emphasis on uniqueness with special emphasis and the coexistence of different in modern multicultural societies. The fact of the proximity of the different invites us, on the one hand, to a creative meeting and to a better knowledge of the other, on the other hand, it does not impose a more consistent engagement and cultivation of our current identity and culture ". 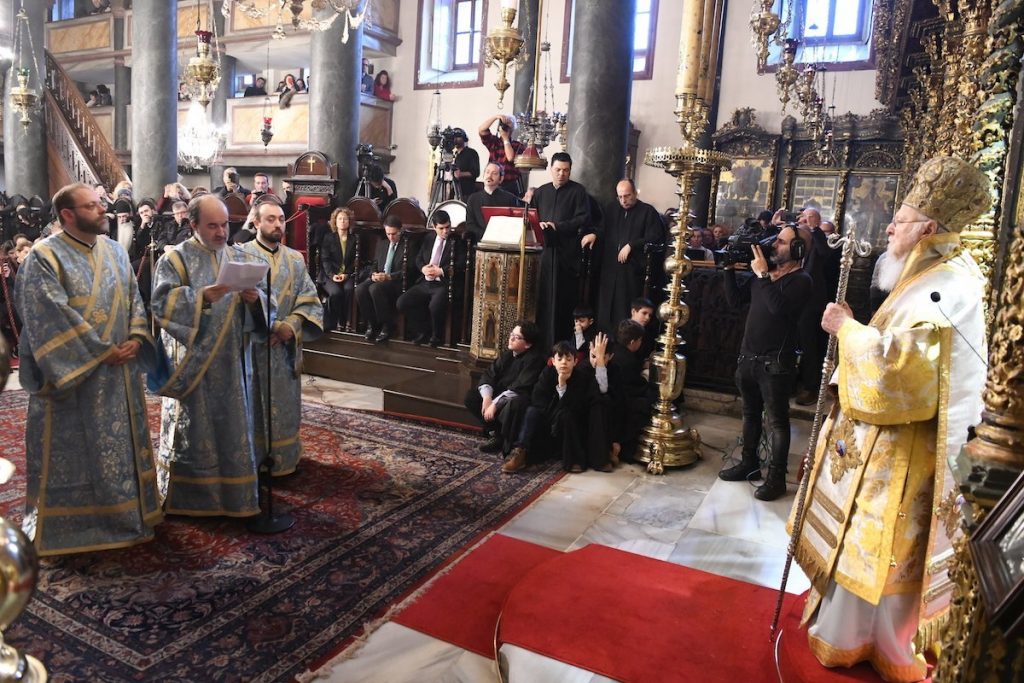 You will serve the Church of Christ in a place of uniqueness and requirements, with its problems, but also the many opportunities for witness and offering, always with "love from a pure heart" (5 Tim. 4: XNUMX), perpetually as a "co-worker of God", of the will "always save men and come to the knowledge of the truth" (AD XNUMX: XNUMX). And you will meet people who do not belong to the Church, but are God-fearing people, pious and respect our pilgrimages and traditions.

To keep the candle lit in the sacred habitat of the Apostle Andrew, which you will keep and serve for the rest of your life, just as we here at the crucifixion Lantern keep the sleepless candle above our Comrade Synthron, who they shone and enlightenment, and will guard the coming generations of the Romans. You will pray unceasingly, not to an impersonal and "immovable" God, seen from afar of man's adventures, but to the benevolent God, who is "for us", who is closer to us than we ourselves are to him. ourselves.

The Church is called in every age and in all circumstances to be "the world of the world" (Origen, VEPES 12, 63), the "beautified love" (Song of Songs 7: XNUMX). The priest celebrates the Divine Eucharist with reference always to his Bishop, receiving everything in thanksgiving from God and reporting everything with thanksgiving to the Lord. The theatrical existence of the Church is concentrated in the Divine Eucharist. The whole of the ecclesiastical life is nourished by it, in it its eschatological and doxological character and orientation are highlighted ". 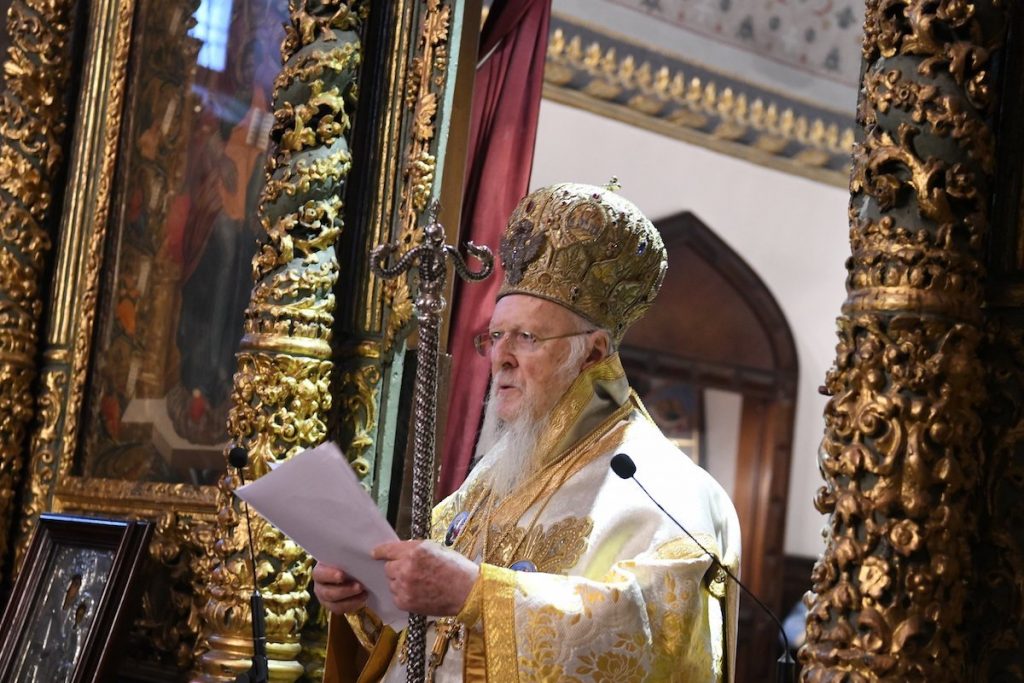 His Holiness pointed out that Fr. Georgios' fat education and training, as a theologian and researcher, his maturity and modesty, his diligence and his zeal, his love for Cyprus, guarantee a dignified and fruitful ministry.

Today, most people are primarily interested in the "beloved self", in self-realization, not in the sense of man's spiritual destiny, but in the satisfaction of individual needs, which accompanies the pervasive "existential void", with the so-called "The end of shame" and moral anarchy, with the identification of sacrificial love and humility with weakness and servitude, you choose "what is needed", dedicated with all your heart and with all your soul and all of it of your power and of all your mind to the Lord and to your brothers. The being of the clergy is a gift of God's grace, which we must offer to our fellow man, for Christ died and rose again. As the Predecessor of our Mediocrity in the Apostolic Throne of Constantinople, John Chrysostom, says, "For in this way he ought to make a proper wish, as one who is good to the people before him, to approach and receive God" (PG 62: 491). Orthodox piety especially honors the priest, the simple and humble, the meek and the philanthropic. It is difficult to accept the so-called "virtual priest", with the mentality of an employee, performer of rituals, without an internal relationship with his high office. The life of a priest must be an uninterrupted relationship after the Other, the High Priest, and after the brothers. Priesthood is an eternal experience and realization of the double commandment of love for God and love of neighbor ”. 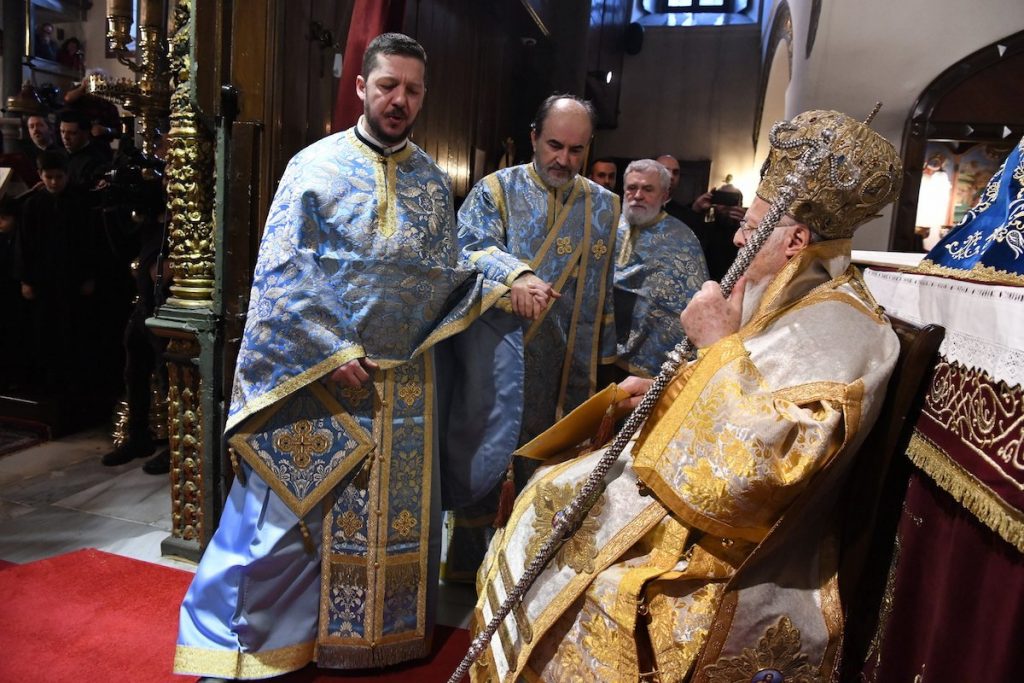 In his rebuttal, Fr. George expressed his gratitude to the Ecumenical Patriarch, "utin the great and good and patriarchal condescension fills my heart with joy and peace and greatly strengthens me in this struggle."

"I bow to the mission of the Mother Church, either through glory and dishonor, through slander and euphemism, sometimes she acts as a missing person and sometimes as a deceased person, as a dying and living being […] The story of Saint Christ the Great encloses the Church three dimensions of time: past, present and future. None of the three dimensions should be ignored. In this divine palace of the Word of God, the brilliant class must not be ignored, which reaches us over time and does not fall into either the simple exaggeration or the excessively sophisticated ”. 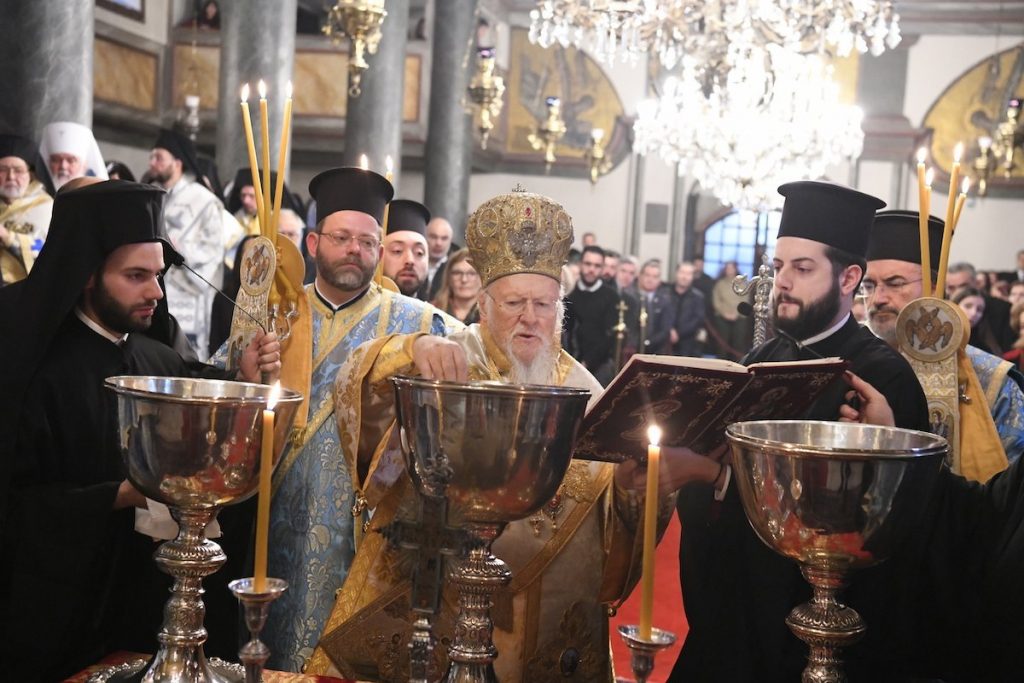 The Deputy Foreign Ministers of Greece, Konstantinos Vlasis, the Ambassador of Greece to Ankara, Michael Diamesis, the Consul General of Greece and Ukraine in the City, Mrs. Georgia Sultanopoulou and Mrs. Alexandr Achikon Gaikli, the Consul of Greece, Mrs. Μ.τ.Χ.Ε. and many believers from the City but also Greece, Cyprus, and many other countries. 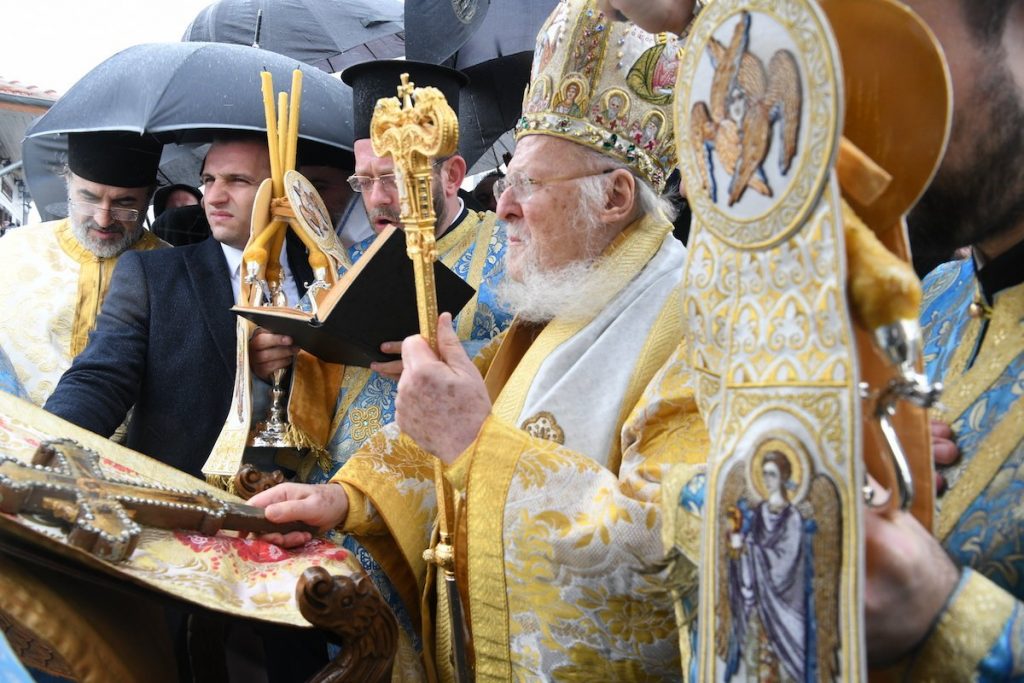 After the end of the Divine Liturgy, the Ecumenical Patriarch, the Archbishops, the officials and the faithful went on a procession to the waterfront of Fanari where His Holiness preceded the ceremony of Sanctification of the waters and the immersion of the Holy Cross in the Horned Gulf.

In the icy waters of Keratio, and despite the adverse weather conditions, more than 20 young people from the city, Greece and abroad dived and the Holy Cross was caught for the fourth time by Mr. Nikolaos Solis, from Agrinio, in which the Ecumenical Patriarch He offered a golden episcopal cross as a blessing, while he blessed all the other swimmers and offered them amulets with the image of Saint Nektarios.