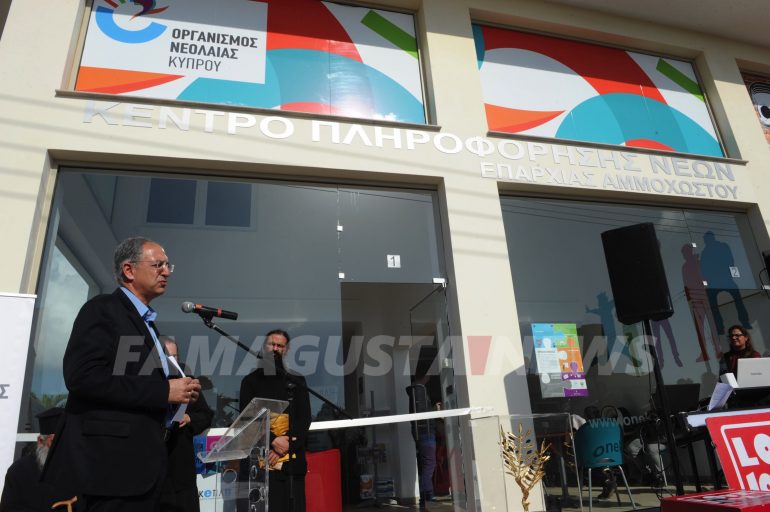 The National Strategy for Youth is being implemented with a series of programs announced by the Cyprus Youth Organization and included in the state budgets, said yesterday the Minister of Education and Culture Costas Kadis.

Welcoming him at the inauguration ceremony of the Famagusta District Youth Information Center in Sotira, the Minister said that "the event symbolically marks the beginning of a new era of reforms and changes in the Cyprus Youth Organization and in the field of Youth in general. to better meet the needs of young people, using our financial resources in the most efficient way and coincides with the implementation of the National Youth Strategy, which is being developed for the first time in Cyprus, and which substantially coordinates and upgrades all political decisions and programs for our young people. "

He added that "we are going through a period in which with methodical steps and a lot of work we are moving forward steadily and decisively," he said, adding that "we are turning challenges into opportunities and implementing reforms that have a positive impact, especially on young people". in the elaboration of the National Youth Strategy 2017-2022, which aims to support and empower young people from 14 to 35 years old. Its importance lies in the fact that it is a product of co-formation with the young people themselves ".

He explained that "the young people themselves were a key partner in the preparation of the Strategy" while "the warmth and enthusiasm with which they responded to this effort, proved that young people want and can be agents of positive change in our country. At the same time, the National Youth Strategy takes into account the most important developments in the field of youth policy in Europe and in the international arena in general, "he said, noting that" the strategy is linked to existing initiatives in the wider government sector, ensuring the active participation of young people in the decision-making process on issues related to various areas of the political and social life of the place ".

According to the Minister of Education, "the National Strategy for Youth is not a theoretical text but is already being implemented with a series of programs that have been announced by ONEK and have been included in the state budgets. The Cyprus Youth Organization plays a key role in this great effort and in cooperation with the Ministry of Education and Culture, its action is being restructured and updated based on the modern needs of young people ".

Mr. Kadis also said that "the operation of the Youth Information Center in the area of ​​free Famagusta marks a new beginning, which we hope to put on a firmer footing the development of young people in the area. "Both the Cyprus Youth Organization and the Ministry of Education and Culture will continue to listen to the needs and suggestions of young people in order to continuously improve their policies and actions."

In his greeting, Mayor Sotiras Georgios Takkas said that "the housing of the Youth Information Center in the province of Famagusta is part of President Anastasiadis' announcements for free Famagusta and especially for Sotira, through which important development projects. Through these projects, but also through the housing of provincial organizations in Sotira, it becomes clear that our Municipality is now an important body of local government ".

The Mayor thanked the Minister of Education, Costas Kadis, "for the efforts he has made together with the Government to promote all these development infrastructures in the Municipality of Sotira. Important projects are the reconstruction of the Municipal Stadium Sotira amounting to 1,2 million and the installation of lighting, costing 100 thousand euros, for which the Ministry of Education has contributed financially ".

He added that "the Youth Information Center of the Youth Organization, in combination with the Center for Social Benefits of the Municipality of Sotira for which implementation processes have already begun, are a realization of the strategic plans of the Municipal Council to emphasize youth issues. We owe and we do it, to give opportunities to our young people to participate in the public and cultural events of our place, to offer opportunities for knowledge and employment but also to offer a voice to the new generation ".

Mayor Sotiras expressed the certainty that "the operation of the Youth Information Center in Sotira will offer young people in the province of Famagusta information and counseling for the projects of the Youth Organization and in cooperation with the Municipality of Sotiras we will achieve our common vision new generation".