The pseudo-state tries to persuade about the ownership of EVKAF in Varosia, but a Turkish Cypriot researcher and archaeologist denies them with data - "In the air" the claims for compensation to the illegal "committee" by Greek Cypriots 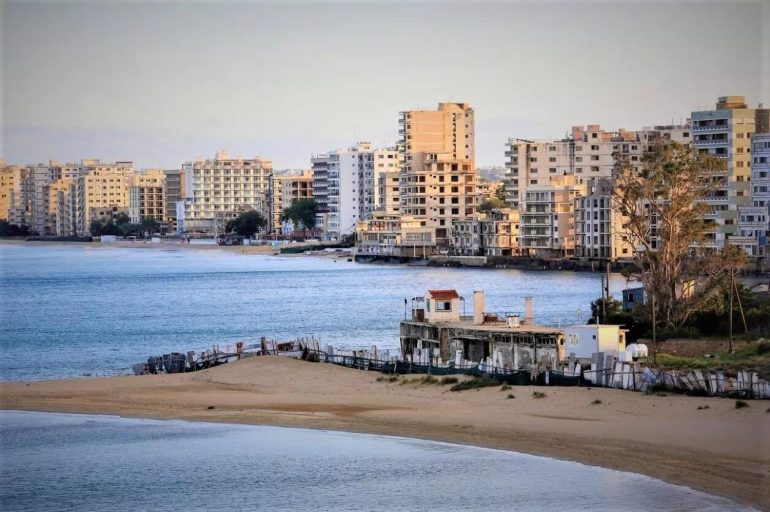 The director of the "administration of institutions" (EVKAF), Ibrahim Bender, reiterated the claim that the whole of Varosi is the property of the Ottomans, but the Turkish Cypriot researcher, writer and archaeologist, Tunzer Baγισκkan, denied it with documents.

According to the GTP, in an interview with the Turkish Hurriyet, Mr. Bender commented on the decision of the "real estate committee" to make EVKAF a party involved in a case registered by a Greek Cypriot for his property in Varosi, since, according to the publication, EVKAF proved with "authentic property titles" that the property in question belonged to the Abdullah Pasha Foundation.

Noting that until this decision the "committee" considered valid only the 1974 titles held by the Greek Cypriots, last week it evaluated the application of EVKAF to become a party involved in this case. According to the article, the lawyer of the Greek Cypriot side claimed that according to the "Law on Institutions" (EVKAF), the deadline for submitting an objection to the property in question, which became private property in the 1940s, is 36 years and has passed. However, EVKAF's lawyers objected to the argument that the original title deeds were found in the basement of an apartment building in 1990 and that the time period for the tensions should have been in force from that date.

Mr. Bender told Hurriyet that the fenced area consists of 4637 acres and is owned by 3 institutions from the Ottoman period. In 1944, the Greek Cypriots, taking advantage of the English laws for the transformation of property, as he claimed, "by fraudulent methods turned into private property the properties of institutions that could not be legally transferred. The whole of Varos is Ottoman property. I have been fighting since the day I took office. We will not let anyone eat the legacy of our grandparents, the orphan properties. "Whoever causes damage to EVKAF property, let the curse of Sultan Suleiman be on him".

Referring to the British Bases, Mr. Bender said that a significant part of the Cape Air Base has been declassified as a military zone and under the 1960 agreements, "the (British) are obliged to transfer the assets of the EVKAF to us. The commander of the British Bases, Lieutenant General Robert John Thomson, promised in writing that he would not transfer to the Greek Cypriots property of 2400 acres owned by EVKAF. However, on the issue of urban planning, he transferred it to the Greek Cypriot municipalities. "Now we will file a lawsuit against the British."

According to the Hurriyet report, when he was the governor of Cyprus, Satrazam Abdullah Pasha bought properties of 2743 acres, paying 30.000 grosis to the owners and gave them to the vakufis.

However, the online Gazedda Kıbrıs writes that Turkish Cypriot researcher, writer and archaeologist Tuncer Bayγισkan has refuted Ibrahim Bender's claim about Varosi and proposes 1975 documents from the EB archive. Asaf and the then "Minister of Defense" and "Vice President" of the T / C "Federal State" (KTFD), Osman Orek in relation to "the assets of the Abdullah Pasha Foundation in Varosi".

In this official correspondence, Niall Assaf states that all of Abdullah Pasha's real estate in Varosi was liquidated by mutual agreement, this money was sent to Mehmet Remzi Bey, the last caretaker of the bakuf, who lived in Istanbul1935 and vakoufi in Varosi, there is no property belonging to this vakoufi in Varosi from that date onwards.

"The Abdullah Pasha Foundation was a waqf that was established in the tenth century and liquidated in 1933 there is no such waqf in Cyprus, because it closed the Waqf in Cyprus with compensation of 18.467, 16, 8 KL (eighteen thousand four hundred and sixty, "repeatedly sent to Mehmet Remzi Bey in Istanbul, who was then his caretaker", is mentioned in the letter signed by Nail Assaf dated May 22, 1975 and published by the online Turkish newspaper.

"In other words, it is understood that the claims of Ibrahim Bender, who until a few years ago claimed that about 80% of Varos belonged to the Abdullah Pasha Foundation, do not correspond to reality," Bagikan said.

The former director of EVKAF

Meanwhile, in an open letter to Tatar and Suzuoglu, Taner Dervis, former director of EVKAF, believes that the decision of the "real estate committee" creates a false belief and perception that their property rights will be protected during the proceedings before the EB. . He notes that when one sees the decision of the ECtHR, on the basis of which the "committee" was created, one understands that this is not the final decision-making body, but the ECtHR itself.

Another important point that should not be ignored, he adds, is that the ECtHR decided in advance in favor of the Greek Cypriots, regardless of the basis of real estate. In this context, the most strategic - as he states - mistake, is the consent of the pseudo-state to put the vakufikas under the ECHR.

Based on this finding, he continues, in the process of the ECtHR, the T / C policy is subject to a summary evaluation under the main chapters.

The main purpose of the "commission", he says, is to provide as an internal remedy, the possibility for the Greek Cypriots to open a case in the ECtHR and win it, making Turkey a party.

Mr. Dervis claims that the property rights and compensation rights of the Turkish Cypriots have been violated, stating that with the decision of the ECtHR (for the creation of the "real estate committee") a mechanism for the compensation of Greek Cypriots was created, but on the other hand There is no corresponding compensation mechanism for the economic-social-political rights of the Turkish Cypriots, who were usurped, as he claimed, of the period 1958 - 1974 and of the rights that were usurped of the vakufis of the period 1878 - 1974.

He also states that the fact that the management of EVKAF is a party to the process in the ECtHR means, in principle, the loss of the fenced area of ​​Varos with compensation. In the second stage, he adds, the bakufiks created in the period 1878-1974 will be lost because a precedent will be created.

He believes that this process will cause the reduction / loss of the status of the pseudo-state and its territories, saying that the process in the ECHR will be for the Turkish Cypriots a significant loss in percentage of land, compensations and migration.

He considers that the vakufikas can not be included in the procedure before the ECHR due to their recognized status under international treaties, legal and constitutional provisions. The legal status of the Vakufiks, he explains, is recognized by the "Laws of the Ottoman Period", the "Laws of the Colonial Period", the "Cypriot Laws", the "Cyprus Constitution of 1960", the "Treaty for the Establishment of the Republic of Cyprus" and the "Treaty of Lausanne".

The mandatory rules of constitutional and legal regulations in the legal system of Cyprus from the date of establishment of the Republic of Cyprus, he continued, provide that the bequests are irrevocable and can not be canceled or modified, the vakufiks can not be disposed of or transferred in any case, can not be confiscated. They predict, he added, the survival of the institutions forever and the return of the occupied bakufiks with compensation.

He also believes that the opening of Varos should be stopped because it violates the "constitution" and interferes in the administration of the "bakufia department" and be kept out of ECtHR procedures.

He argues that the status of the military zone should be maintained in Varosi.