Children under 18 months away from the screens 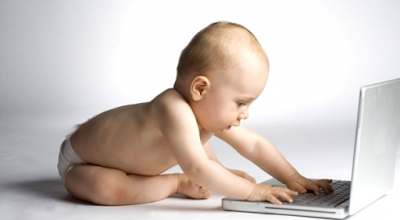 As modern children grow up "immersed" - whether they like it or not - in an environment with electronic gadgets and monitors, and parents often do not know what to do, the American Academy of Pediatrics has issued new formal recommendations.

It is a kind of "compass" to guide dads and moms on whether and how much they should let their young children play with a device or watch a screen.

The two basic tips are: no screen for children up to 18 months, while no more than an hour screen for two to five year olds. Furthermore, parents should never be tempted to give electronic devices to their children to reassure them when they are crying or persistently seeking their parents' attention. This "trick" is only allowed in exceptional cases, such as on airplanes or on visits to doctors.

The new recommendations, published in the Academy's journal Pediatrics, led by Associate Professor of Pediatrics Megan Moreno and Greek-born Dimitris Christakis of Seattle University and Children's Hospital, highlight the need for balanced use of electronic devices. Adequate sleep and plenty of time with the whole family for food or games (no screens!).

Also, the right thing is not to use screens in the child's bedroom or at meal time. A basic rule should also be no screen use one hour before bedtime.

When toddlers use a device, it may be ideal for a TV or other program that they can watch or for an electronic game that children can play with their parents. Especially children up to two years old can not learn much from an electronic device (electronic children's book, children's video game, etc.), without the help of an adult.

"It's like a car. You do not just give him the keys and say to the child "okay, I drove it". "You are sitting next to him during the first years he is driving," Moreno stressed. And if the child is playing with an application (app) on the tablet or mobile phone, the parent should have "checked" it first.

But older children, over the age of five, as well as adolescents, should be set limits on how much time they spend in front of a screen, small or large. Frequent use of screens interferes with the smooth development of the brain, adequate sleep, the "building" of healthy interpersonal relationships, etc.

According to American pediatricians, what a child does in front of a screen is very important. For example, there is no problem if he talks on Skype with his grandmother or if he uses Facebook when he feels isolated from his classmates because he is obese or gay.

"Social media is not good or bad. "What really matters is what the child does with them and how he uses them," Moreno said.

Also, the Academy of Pediatrics recommends parents to reduce the excessive use of electronic devices (mobile phones, computers, etc.) at home, but also when they are with their children (eg during a walk) , because this lack of parent-child communication lays the foundation for future alienation and conflicts between them.