"Memories of War 1974": A tribute to the Lokatzides of Sotira 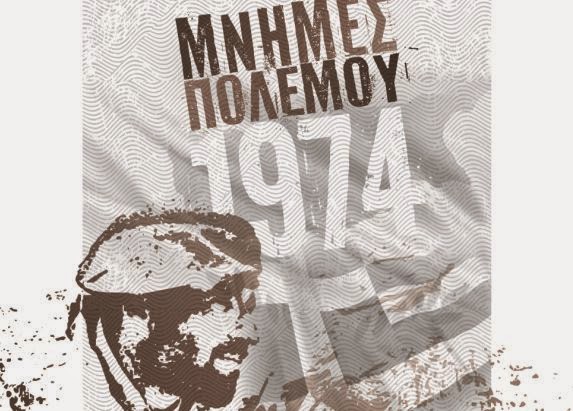 Event-Tribute for the Lokatzides of Sotira is organized on Tuesday, October 28 by the Sotiras Reserve Paratroopers Club, at 19:00 at the Municipal Theater of Sotira.

The event will present the book "Memories of War 1974" by journalist Marios Adamos, which includes personal testimonies through the subjective perspective of the protagonists-narrators, as they experienced and remember them decades after the events that marked the recent Cypriot history. . The event is under the auspices of the Most Venerable Metropolitan of Constantia-Famagusta Mr. Vassilios and the Municipality of Sotiras. At the event, the 13 commandos who offered their testimonies for the writing of the book will be honored, as well as posthumous honor will be given to the first three commandos of the Savior, Antonis Kaouras, Theodoulos Theodoulou and Georgios Maou. In the introduction of the book, the author Marios Adamou writes:

"With special honor but also a sense of responsibility I accepted the invitation from the reserve commandos of Sotira to collect and record the lives of the commandos of 1974, who come from or live in Sotira. The testimonies were taken and recorded in about a year and a half. The result is the book you have in your hands, which is a testament to the soul of these people. These are testimonies of drawers and reservists, who in the black summer of 1974 were called, most of them 18-year-old Amoustak lads, to defend the freedom of the Cypriot Hellenism and the territorial integrity of the Republic of Cyprus. It is clarified that in no case was an attempt made to record a historical work.

Personal testimonies, as experienced by the narrators themselves and remembered decades after the events that marked the recent Cypriot history. They were taken in the form of personal interviews and then adapted into a single text for each narrator. The events are recorded through the subjective point of view of the protagonists-narrators. In no case, however, were historical events and battles recorded without the prior cross-referencing of information, through the existing bibliography, nor was there any attempt to falsify such facts and testimonies. These people confessed their personal anxieties and traumatic experiences, from the events of the foolish coup, the barbaric invasion and those who later lived in the hands of the invaders when they were taken prisoner of war. Acts of courage, self-denial and bravery, unfolding in parallel with moments of fear, terror and despair, are shocking. Pride becomes apparent, along with bitterness and anger over the magnitude of the betrayal.

Also, with references, an attempt is made to explain events, while at the beginning the action of the Expeditions during the invasion is presented, even briefly. Unfortunately, as will be seen from the reading of the testimonies, this select body of the National Guard was used by the instigators of the Coup, as a spearhead in their attempt to seize power. It should be noted that it was very painful, both for the narrators and the author.

The commanders of the four Squadrons of 31MK, 32MK, 33MK and the reserve 34MK, gave the fight from the first day of the invasion, completing in some cases the missions assigned to them, while in others, unfortunately due to factors that did not have with themselves, failed. They lived the traumatic experiences of self-dissolution, naughty retreat and the loss of many of their comrades-in-arms on the sacred battlefield, among them commanders and captains. The four divisions took part in important battles. Although they were, perhaps, the elite corps of the National Guard, according to most military scholars and historians, they were used due to criminal acts and omissions of the top leadership of the army, in the wrong way. A tragic result for some companies to be literally decimated and slaughtered in battle by superior enemy forces - a typical case of 33 MK on July 22 in Agios Georgios, Kyrenia. After the battles for the occupation of Kotzakaya, Aspri Moutti, Petromouthia - Agios Hilarion and Agyrta on the first night of the invasion, the Squadrons were used as infantry battalions, rather than as select units. The narrative shows the catalytic role that the leaders of the Squadrons, the battalions, even the divisions and the team leaders had in the combat ability and especially in the morale of the soldiers. Where they were worthy of their mission, the results were memorable. Otherwise it was one of the main causes of failure.

We do not expect that everyone will agree with how the events are presented through the personal testimonies of the protagonists. But the hope is that the mistakes and omissions of the past, the pain they caused and their relief consequences, become a guide, so that we avoid repeating them in the future. This is our supreme debt to those who have fallen or are ignored on the battlefield. After all, the raids paid a heavy blood tax with hundreds of dead, missing and wounded.

Thanks to everyone who contributed to the publication of the book. To all the members of the Sotiras Reserve Commando Club who assisted in these efforts, but mainly to Alexandros Kaikkis and Michalis Christofis Fouris, for their valuable assistance in obtaining interviews and collecting photographic material.

We owe special thanks and immense gratitude to the heroic warriors of 1974, who opened their hearts and brought out from their souls bitter memories that they had registered or temporarily forgotten. It has been extremely difficult and often painful and traumatic for everyone to regain their memory. So the book is dedicated to them. In the newly sprouted shoots of '74, that at the dawn of July 20, as the poet writes: "they saw the dawn through the frost of death". Marios Adamou ".