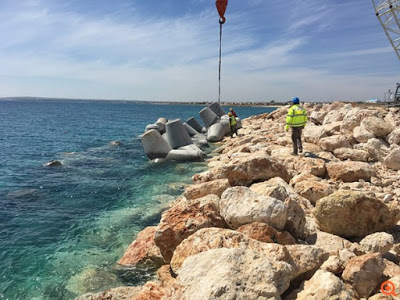 The works for the completion of the Marina in Ayia Napa are in full swing, which is placed in the summer of 2021. The project is expected to give new life to the free area of ​​Famagusta and will contribute to the quality enhancement of the tourist product.

The capital.com.cy was at the site and found first hand the development of construction projects, but also the "change that is taking shape in the map of Cyprus." As the officials of the Ayia Napa marina explained, the process of landfilling of the sea is currently underway, where a significant part of the marina will be developed. This results in the "change of the map of Cyprus", since the land will extend to the sea.

As the officials of the marina assured, all the works are carried out after obtaining the necessary permits and having as a priority the safety of the workers and the protection of the natural environment. 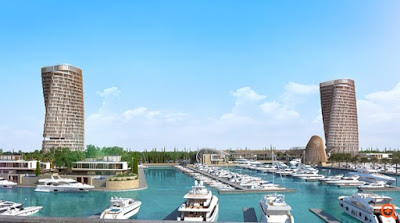 The identity of the marina

With a coastline that reaches 1km, the marina of Ayia Napa will be able to accommodate a total of 600 boats, with the largest reaching 75 meters. The total cost of the marina is expected to reach € 250 million. The consortium that undertook the creation of the marina (with the participation of the Caramondani company and the group of the well-known Egyptian businessman Naguib Sawiris) will be responsible for its management, for the next 50 years. The marina will start operating in the summer of 2019, however, it will be completed in the summer of 2021.

Residential development is a big part of the marina. As we were told, two 100-meter towers will be built inside the marina, which will have a total of 190 apartments.

In addition, 29 villas will be built as follows: 11 beach villas, 12 island villas (on the artificial island that will be created in the sea and 6 peninsula villas.

In addition to the above, the whole project will include commercial and shipping activities, as well as the necessary government services.

The CEO of MM Makronisos Marina Ltd, Stavros Karamontanis, noted that the process for the creation of the marina goes back to the distant 1996, when the first efforts had begun.

Bids were announced in 2002, but the signatures, due to various obstacles and problems that arose in the process, fell only in 2012. In 2013, an agreement was reached with the Egyptian Naguib Sawiris, while in 2016, infrastructure and construction work began. The full completion of the project is expected in 2021. According to Ayia Napa Marina officials, through a series of successful promotions, the project has gained international fame, attracting growing interest from investors and buyers.

The Ayia Napa Marina received very positive comments during its presentation at events and exhibitions in Dubai and London, while in a few days the official presentation of the project is expected in Moscow. Indicative of the interest is the fact that 30% of the East Tower of the project has already been sold.

Ayia Napa Marina is the most important development that takes place in Ayia Napa and the Famagusta area and is one of the most ambitious projects implemented in our country. With the completion of the project, Ayia Napa Marina will upgrade the area and its tourist product, acting as a lever for the development of the local economy while strengthening the image of Ayia Napa as a quality destination for both investment and tourism.

The CEO of the Ayia Napa marina, Stavros Karamontanis, talks in the Capital Today insert of the show Mesimeri kai Kati sto Sigma, about the ongoing works.