The territorial fiasco… and the tragedy of Famagusta 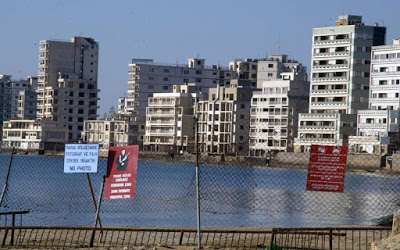 As it is known, President Anastasiadis and his associates as well as the negotiator Andreas Mavrogiannis himself set, among other conditions, to participate in an "international" conference the submission of a paper which reflects clear and previously agreed criteria on the ground.

Instead, our side participated in the Geneva conference without the prior agreement on the territorial criteria, as a result of which the occupying leader was "liberated" and submitted a charter complying only with the agreed percentage of 28,2% - 29,2% .

As we can assume from the reaction of President Anastasiadis to submit a direct written disagreement on the submission of a paper by Mr. Akinci, the occupying leadership of the T / C, in full identification with the Sultan of Ankara, proposed the return of some villages in Mesaoria and probably the fenced part of Famagusta which constitutes 16,73% of its municipal boundaries.

No reason for the return of Morphou, no report about the fate of the rest of Famagusta and no redistribution of the coastline that holds no concessions! Everything in the dark !!!

It is therefore beyond any reasonable doubt that the policy of retreats and successive slips in the remaining chapters on our part not only did not achieve the desired convergences on the territorial but on the contrary further fostered Turkish bulimia and once again discouraged the to whom, with criminal innocence, we gave the title of the compromising T / C leader and invested a wolf with the sheep.

It has become clear to even the most bona fide judge that Mustafa Akinci presents himself as a compromiser only when he has to take and becomes rigid and impudent when he is called to give! This has always been the Turkish mentality, tactics and practice, which we either do not want to understand or we continue to pretend and go blind.

But the most tragic aspect of the territory is the story of the return of Famagusta.

A city that literally and in the betrayal of the 1974 era we had abandoned at the mercy of the invading Turkish troops.

A city that we have betrayed in a row and continuously by setting aside or neutralizing all the provisions and Resolutions that clearly and unequivocally provided for its return to its rightful inhabitants: UN Resolutions 550 and 789, European Parliament resolutions, UN agreements, for the performance of the city as a Confidence Building Measure etc.

We have done everything: an endless series of criminal and stupid omissions and an unforgivable chain of unfortunate manipulations and tragic mistakes to leave the city at the mercy of time and in the hands of its conquerors, to give today the right to the audacity of the Sultan of Ankara and of his resident in Cyprus to offer 1/5 of it and in exchange for the concession of Tillyria to unite it with the occupied Morphou !!!

These are the results of our imaginative policy from 1974 until today!

As a citizen of Famagusta but also as an elected municipal councilor of my city, I have published dozens of my articles on the tragedy of Famagusta in order to raise the awareness of my fellow citizens and to awaken them from the lethargy they have fallen into through the half-hearted and constructive the big issue of the return of our city.

Unfortunately the results are heartbreaking.

Today no Famagusta resident (including the Municipal Council of Famagusta) knows what is the position of the leadership and our negotiating team for the return of Famagusta and for the confusion that is being perpetuated between Varosia, Famagusta, fenced section, etc.

So let everyone establish it: Famagusta, Varosi, Varosia is our whole city that we must claim by implementing the requirements of the United Nations itself and international legality.