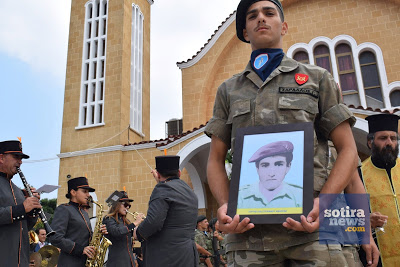 The funeral of the previously missing Andreas Paschalis Stylianou was held today with a 43-year delay. Andreas Stylianou, a soldier of the 399th Infantry Division, fell while fighting during the Turkish Invasion, in the area of ​​Aspri Moutti, on July 22, 1974, at the age of 18. His bones were found and identified by the DNA method. The funeral procession was held today at 11:30 in the morning at the Metropolitan Church of Agios Georgios in Paralimni. Funeral speech by the Presidential Commissioner at the funeral of Andreas Stylianou, killed in 1974 by the Turkish invaders:

With feelings of awe and deep emotion we gathered today at the church of Agios Georgios, in Paralimni, to pay our last respects to another of our compatriots who fell in favor of altars and hearths defending the freedom and territorial integrity of our homeland.

We say goodbye with due respect to Andreas Stylianou and we pray to the Most High for the rest of his soul, reliving the nightmarish hours that our homeland experienced in that black summer of 1974.

Forty-three years later we are still burying the remains of the dead of the Cypriot tragedy.

The occupation, the settlement, the dead, the missing, the encroachment of our sanctuaries and saints, the violent expulsion of one third of our population from their homes and property, the attempt to falsify our history, are the great wounds that left in our homeland by Attila. Wounds that, due to Turkish intransigence and negativity, have not yet healed and remain open, despite the efforts made by our side claiming our rights.

The most tragic aspect, however, is our missing persons. Andreas Stylianos's parents, Paschalis and Foureggou, are no longer alive to bring their only child with us. They died with the grief, bitterness and anguish of their child's disappearance, as do many other parents, but also spouses and siblings who complete their life cycle with unanswered questions about the fate of their loved ones. The hero's brother, Stelios, who also passed away without learning about his brother's fate, is not with us yet.

Andreas's four sisters are with us in this sacred space: Eleni, Katelou, Antonia and Chrystalla, as well as their own children and other relatives who are mourning, and together they feel great pride in the heroism shown by Andreas, with a high sense of responsibility and self-denial towards the homeland.

We are talking about you, soldier Andreas Stylianou. For you who did not hesitate to choose the path of duty and national dignity. You did not count the risk not out of naivety or ignorance, but out of an inner need to offer and a sense of responsibility towards the homeland. For you who came without a second thought to her call to defend her rights and you were not afraid even for a moment in the face of death, remaining upright until the end.

Andreas was born on October 20, 1956 and before the Turkish invasion he lived with his parents in Paralimni. He was nurtured in a family environment with a legacy of Greek history rich in courage and bravery.

However, the fate of his death was hard for him, as well as for his comrades-in-arms, at the windswept peaks of Pentadaktylos. Many bodies remained for decades unburied, north of the vultures and at the mercy of the weather. Some of his bones, as well as about 20 other national guardsmen belonging to the same battalion, the 399th Infantry Battalion based in Bogazi Famagusta, were found scattered on the steep slopes of Alonarga where fierce battles were fought in an attempt to occupy the area. of Aspri Moutti.

In this area, which was of great importance, the Turkish forces had dropped a strong force of paratroopers, in an attempt to build a bridgehead for their expansion into the wider area. It was shortly after noon when the men of two battalions of the 399th Battalion were ordered to attack the positions occupied by the Turkish paratroopers. However, they were confronted with heavy fire and tried to cover themselves. Mortars and other heavy weapons rained down on them.

The men of the National Guard also fired from their positions with the thin and outdated weapons they had. The exchange of fire continued until nightfall. At dawn the next day, July 21, 1974, Turkish forces launched a major offensive in the area, covering their air force. The men of the National Guard continued to resist but the enemy forces were superior and with much heavier armament.

Soon the whole area was occupied by the superior Turkish troops, both in men and in heavy and modern weapons. Since then, Andreas Stylianou, like several other men in the battalion, has shown no signs of life. There was no further evidence until many years later, on the basis of information and findings from scientists' research and examinations, the tragic epilogue began to be written by identifying the scorpion bones and informing the relatives.

We do not underestimate or ignore the work of the Commission of Inquiry into the Missing. On the contrary. But while nine hundred so many of our compatriots are still missing, as long as the pain and anguish for the thousands of relatives continues, as long as the occupying power continues to put obstacles and does not cooperate to the extent necessary to determine the fate of all without exception to our missing persons, we can only work continuously and unceasingly to advance the solution of this humanitarian problem.

The occupying force constantly obstructs the number of exhumations per year and stubbornly refuses to allow investigators access to the Turkish army archives, where there is certainly information on many more cases of missing persons. And, of course, he also stubbornly refuses to give evidence of the violent movement of bones from the original burial sites to others in order to hide the enormous guilt regarding the mass executions of our compatriots.

What Turkey is doing is both inhuman and criminal because it still refuses to cooperate on a humanitarian issue, because the issue of the missing is not a political issue but a problem that touches human lives. It is a shame for the international community itself that after 43 years it failed to persuade and force the occupying power to cooperate.

The responsibilities of Turkey for the pending solution of the Cyprus problem are also huge. This was made very clear at the recent conference in Grand Montana, Switzerland.

Unfortunately, the occupying power insisted until the end on maintaining the anachronistic system of security and guarantees of 1960, as well as on the presence of a number of its troops in Cyprus.

The President of the Republic made clear his intention to continue the effort to achieve the desired solution, but it is enough to respond on the other hand by abandoning mainly the unacceptable positions on the issues of security of guarantees. We seek a solution that will be in the interest of the legal residents of our country and not a solution that serves the interests of any third country, especially the one that caused the disaster in Cyprus and continues to illegally occupy a significant part of our country.

At the same time, as far as our internal front is concerned, conditions of unity and consensus must prevail in order to best deal with the Turkish aspirations. Conditions that exclude the passions and disputes of the past and, at the same time, create prospects for a better and more promising future.

This is our debt to our heroes. In honor of their memory and sacrifice, we must not allow ourselves to prove themselves inferior to the circumstances, inferior to their own offering to the homeland. Today, we write the epilogue of the tragic story of a worthy child of the heroine of Paralimni.

Andreas's parents, Paschalis and Fouregos, as well as his brother, who passed away with the misery of ascertaining his fate, would be proud of their leventoni today.

You should be proud of the legacy that man has left you, not only to you, but to society and to all of us.

I wish the end of the long-term agony for the fate of your man, to calm your soul and alleviate your pain.

Andreas fell on the ramparts of duty and to him as well as to all those who gave their lives for the freedom and independence of Cyprus we owe a lot. We owe our existence as the Republic of Cyprus as well as our dignity as free people.

We say goodbye today to Andreas Stylianou and I am gratefully honoring his memory.

We recognize that we owe him an outstanding debt and we will fight to meet it. We will never stop fighting until we bring freedom, peace and security to this long-suffering place.

May the memory and glory of the soldier of 399 TP be eternal. Andrea Stylianou of Paschalis and Fouregos.