Hadjidimitriou: The works for Apostolos Andreas are progressing 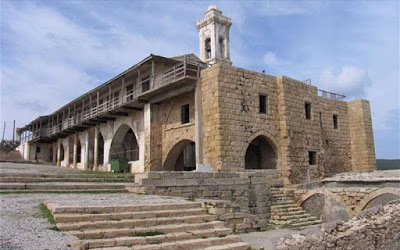 The restoration works of the Monastery of Apostolos Andreas are nearing completion, said the head of the e / k side of the bi-communal Technical Committee for Cultural Heritage, Takis Hatzidimitriou, in statements to journalists after the discussion of the issue before the Refugee Committee of the Parliament. Mr. Hatzidimitriou said that the contract states the end of May as the expiration date, but noted that there may be a slight delay.

When the monastery is handed over, he said, it will be in excellent condition and better than it was before 1974.

During this period, he said, works are being carried out in the central core of the monument at a cost of almost 2.2 million euros, while parts of the monastery are being completed that when it had started to be built were not completed.

The next stage, he said, concerns the medieval chapel. Archaeological excavations have already been carried out for this project to establish that there are no obstacles, while a geological survey has been carried out. "We are ready to move on to the second stage," he said.

He added that the third and fourth stages concern the surrounding area and the neighboring buildings and that it is possible to combine the two stages.

All stages of the project will be completed within two years.

Mr. Hatzidimitriou said that Agios Panteleimonas, Apostolos Andreas and the walls of Famagusta are the largest projects undertaken by the Technical Committee, with broader messages of cooperation between the two communities.

As for the occupied Agios Panteleimon, he said that the area especially around the church is collapsing and that at the moment there is support for the project, while work has begun inside the church.

Another monument for which offers will be announced soon is the Archangel Michael in Lefkonikos.

The Commission, he concluded, takes care of some very important projects of archaeological importance and expressed the hope that they will proceed quickly and will be announced.

The Chairman of the Refugee Committee, Skevi Koukouma, expressed the Commission's satisfaction with the fact that the progress of the project is progressing, adding that the small delay of one month in the completion of the first phase of the project is understandable.

At the same time, he expressed the hope that by July the first phase will be completed and the monastery, which is one of the most important religious places of worship, will be at the disposal of the faithful.

He also said that with the completion of the first phase, it is expected that work will begin for the next phases.

He also said that measures should be taken to move the vendors from the area, as this requires respect for worship customs.

Ms. Koukouma said that the members of the Commission were informed about the other conservation projects of the occupied monuments, expressing the hope that these will proceed and will be implemented in accordance with the priority set by the bi-communal technical committee for cultural heritage.

Ms. Koukouma further said that the Refugee Committee raised the issue of the poor condition of the Rizokarpasos cemetery, asking that it take care to promote the maintenance of the cemetery.

The President of the Refugee Committee referred to the burning of the mosque in Denia, adding that the damage caused exceeded the material. The mosque, he said, had been maintained by the technical committee and before it was operational it caused this damage, which sends the message to Greek Cypriots and Turkish Cypriots that they should be vigilant in order to create and preserve a climate of mutual respect and understanding.

Ms. Koukouma expressed regret that the Council for Reconstruction and Resettlement, which has conducted studies for Famagusta, Morphou and other areas, has not reopened, adding that since its members operate on a voluntary basis we can not expect that they will carry out the work to be done in the current phase of developments.

"Today, with the talks and messages being sent for the prospect of resolving the Cyprus problem, the Council for Reconstruction and Resettlement should function permanently, steadily and more intensively," he concluded.

DISY MP Kyriakos Hatzigiannis said that according to the information received by the Commission, the work on Apostolos Andreas is proceeding according to the original schedules and added that there may be a slight delay but "this can not be perceived as a delay with political dimensions." .

However, he said, this delay should not exceed 2-3 months because the next phases of the project will continue.

"We hope that the first phase of the project will be completed by June at the latest," he concluded.