The track that changed the life of a city 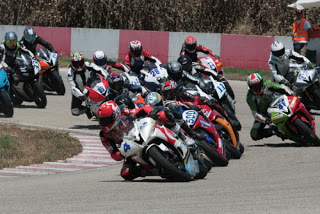 Every season is ideal to visit Serres. To go up to Lailias, to the acropolis of Koula, to go boating near the birds of Kerkini, to see Poria, the monastery of Timios Prodromos and the cave of Alistrati. In the last 15 years, however, another element has given a great tourist boost to the region with social and economic benefits. This is the Omonia Sports Park which includes the only motorway in our country.

«Motorway is the track where car and motorcycle races, driving lessons, tests and presentations of new models are held in the controlled area "says the municipal councilor, founding member and president of the Car Club and former deputy mayor Takis Sotiriadis. "The idea for the project came one day in 1990, when the then mayor Giannis Vlachos envisioned making something that would be really good in the city, but also in the wider area. We then asked the people about our ambitious plan, but as they were afraid of the speed crazy people who would come to their city, they treated us with reservations and suspicion, while some others laughed under their mustaches. "Also, because we did not have any funding, the entire initial cost of 550 million drachmas would then be covered by the citizens and this made us feel very responsible," he says. "But, my child, we believed a lot in the project and against the data of that time, Giannis Vlachos gave the order to continue. "He did not want us to copy or make something that would eventually fade away in the long run, but a development project that would not exist in our country and would attract people all year round."

Thousands of motorsport fans were completely disappointed by the sloppiness of the issue in Greece until then. Suddenly and without anyone having known it before, in May 1998 the track was inaugurated. "We did not want to make it public, we waited for it to be completed and then presented it!" he says and the tone of his voice rises.

For us motorsport fans, the frustration so far has become an excitement, as we have all been impressed by the really good work done on the project infrastructure. How did you do that? "Nothing was easy. Initially, because we lacked know-how, we had to travel on recognized tracks abroad - Imola, Mizano, Mouzelo. The design was undertaken by two surveyors, municipal employees (!), George Karyotis and Lefteris Panagiotopoulos, who really worked day and night until the completion of the project, faithfully following the specifications set by the International Automobile Federation. This is especially true in difficult weather conditions, as it holds no water anywhere, with the carpet offering proverbial grip on vehicles. "Think that the track is boxed and has five layers along with the last, non-slip mat!" THE JUSTICE:
But in October 1998, in the municipal elections, your combination lost. "We are responsible for that. People could not realize the value of the project in such a few months and we, absorbed in the completion of the highway, did not help them to understand it. However, later Giannis Vlachos returned to the administration, as time justified him. Apart from individuals and motor sports professionals, all magazines and some channels now passed through the racetrack. Innovative for our country is the fact that the municipality built a body in the form of SA, with the sole purpose of more rational management of the highway! ".

What else does Omonia Sports Park include? "Out of the area of ​​1.000 acres, 500 acres have been occupied by the track and its facilities. In the rest, a go-kart track, an indoor gym, tennis and football courts, as well as a traffic education park have been created. Also in the Park we recently built the only driver training center in Greece "says Takis Sotiriadis with a dose of pride.

Did the creation of the Park finally achieve its goal? "Absolutely," says Olympios Tzambazis, the man who first managed the track and now has taken over the cafeteria. "Greece has taught us", he continues, "as suddenly the city of Serres entered the map of tourist destinations. "Even for us locals, the contact with the people who came was good, as we realized the value of our area".

THE RESIDENTS:
What do the residents of the city think? The manager of the Philippos Hotel says that "the track created the conditions for more hotels to be built as the visitors of the highway often sit for 2-3 more days in order to get to know the area better".

"Before the highway there were about 200-300 beds in the city, now they exceed 2.000", says Takis Sotiriadis and adds. "We have visitors from all over Greece but also from Bulgaria, Turkey and Israel, who, in addition to their tests, also organize races on the Serres track. In fact, some Israelis rent houses all year round, as they often come to the track and want to have their things here. Giannis Papadopoulos, president of the confectioners, has a similar opinion for the creation of the track, who makes in Rekor one of the most famous products of the area, the famous bougatses. "The track brought a lot of people, as in big events, such as the Enduro World Championship in 2008, the visitors may have exceeded 3.000-4.000," he says. And adds Vassilis Nenexis, the owner of the restaurant Hellenic Tastes: "It brought work to all of us as they leave money in hotels, shops, food."

See the website of the Serres Motorway by clicking here