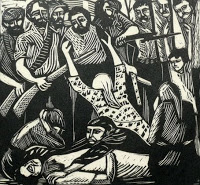 When I first settled in Cyprus about 20 years ago, a little boy asked me what I came here to do after we "squids" sold his homeland. I tried to explain to him that first of all the ordinary people are not responsible for the wrong moves of the politicians…

Second and most importantly, that it was not a democratic government that made these infamous decisions but a directed junta that tortured, imprisoned, killed and exiled the Greeks themselves and that Greeks, out of love for the brotherly people, rushed to help despite the orders and were accidentally shot down in a panic. I was confronted with fanaticism in all its glory - something you never expect to encounter from a 10-year-old.

Later I was impressed by the separation of the children themselves into left and right, scouts and grandchildren into like-minded and unorthodox people based on political beliefs. So the reasonable question comes to me: How is it possible for a country, a splinter, which is left half, to fanatize half of its children, its future, against the other half of their offspring? How is it possible that two neighbors can not play on the same local soccer field because one is left and the other is right? In what other civilized country of the 21st century is the sport "painted" politically, which from the beginning of the world has its own ideology, that of "fighting well", which no faction has the right to yellow? From where and to where do we dream that foreigners will care to unite our Island when we ourselves divide the half we own every day? When our children see their classmates as traitors since their father has the opposite ideology?

"Anyone who thinks freely thinks well," said Rigas Feraios. I grew up in a house where my father was right and my mother was left. And yet I realized this after I was 16 years old when I asked my mother myself. However, neither of them tried to influence me, on the contrary, they encouraged me to form my own point of view since I was first studying History and had the necessary knowledge to support my views. Freedom presupposes research and therefore knowledge. Thank you very much for that! Today I feel that I am a free person thanks to the trust that my parents showed in my judgment and in the pluralism that existed in our home. Sure, one of my parents was upset, but I can assure you that he survived. Turning my child into an empty mouthpiece of my own beliefs honors neither me nor my child. Allowing parties to use our youth as their subordinates and to partisanize student councils honors me neither as a parent nor as a teacher. The fact that the youth of this place is divided every day makes me sad, it makes me angry, it scares me.

I am frightened by the thought that some people want the Cypriots permanently divided and fanatically attached to the past and the disputes. Unity can not characterize us as a people as long as politicians, for their selfish interests and greedy ambitions, manage to perpetuate fanaticism and intolerance within our own walls. Human need, to blame all the woes of our place on the other, the traitor - and how much easier than to follow like gullible lambs the slogans of the shepherd, the leader of our party, whatever that may be.

Unfortunately, poor Psorokostaina went through the phase with green, red and blue cafes and booming crimes for political beliefs. Today the Greek people realize how corrupt the political system is and how foolish it was for them to be fanatical about brainwashing their slogans against their brother, neighbor, cousin. The percentages of both major parties show the frustration of the Greek people. Finally unity! Everyone now agrees on a simple but at the same time so difficult: how the system gets sick! And that politicians are professional exploiters who sell very expensive utopian promises.

Do we here in Cyprus have to suffer the same to wake up? When will we let the past teach us that people are always divided and defeated? When will we leave our children without a party label until they decide for themselves what color they prefer? (as if as the most intelligent generation they may decide to abolish the parties as we know them today!)