The hero of the invasion of Symeon Glykainou was buried 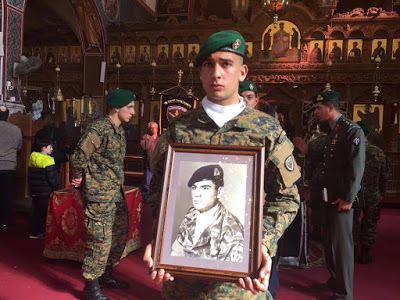 The funeral of the previously missing, Paralimni hero of the Turkish invasion of 1974 Symeon Glykainos was held on Sunday at the Metropolitan Church of Agios Georgios in Paralimni. The remains of the hero were found in a mass grave in the area of ​​Jiaos, as part of the program of exhumation and identification of remains of the Commission of Inquiry for the Missing

The state was represented by the Presidential Commissioner, Fotis Fotiou. Speech by the Presidential Commissioner at the funeral of Symeon Glykainos, who was killed by the Turks in 1974

We gathered here today, in this sacred place, with feelings of deep emotion and awe to pay our last respects and express our gratitude to another hero of Cypriot freedom, Symeon Glykainou, who was sacrificed in the unequal and betrayed battles against hordes of the Turkish Attila that black that summer of '74 and wrote in indelible letters his own name in the pantheon of our immortals.


Forty-two years later, we are still burying the remains of the dead of the Cypriot tragedy. I feel, like everyone else, the great honor of talking about a hero. To evaluate in words what the mind can not always comprehend. Because the heroes, as Seferis points out, proceed with the starting point and destination of the unknown, without the expectation of personal benefit, without any exchange, except the satisfaction from the offer of the supreme service in the homeland.


Yes, it is a great honor to speak of a hero and to give him the proper fair tax of eternal gratitude. As Cavafy aptly pointed out, true honor must be given to those "where in their lives they have appointed to guard Thermopylae, never moving from debt". We are talking about you, Sergeant of the Expeditions of Symeon Glykainos, Markos and Eleni. We are talking about you who did not hesitate to choose the path of duty and national dignity. You did not count the risk not out of naivety or ignorance, but out of an inner need to offer and a sense of responsibility towards the homeland. For you who came without a second thought to her call, to defend her rights and did not shy away even for a moment in the face of death, remaining upright until the end.


Facing his relics, we reverently close the fur on his sacrifice and express our deep gratitude for his enormous offer. History will record his own sacrifice for the freedom and territorial integrity of our country. And history is not only to record events, but also to constantly remind us of our debt to our heroes and martyrs, which is nothing but the justification of their sacrifice.


Symeon Glykainou was born on September 22, 1951, he was single and before the Turkish invasion he lived with his parents in Paralimni. He was sensitive and hardworking. He was nurtured in a family environment with a legacy of Greek history rich in courage and bravery. In 1969 he enlisted in the National Guard and fulfilled his military obligations. After his basic training he was placed in the 33rd Squadron, based in Bellapais. For the skills and strength he showed he was promoted to the rank of Sergeant.


With the beginning of the Turkish invasion on July 20, 1974, he enlisted as a reserve in the 32nd Squadron, whose base was in Agios Chrysostomos, on the outskirts of Pentadaktylos. On the same day, the men of the Squadron carried out various missions against the Turks in the area of ​​Aspri Moutti. Then, at the end of the first phase of the invasion, all the men of the Squadron were transported back to their camp.


During the military operations, Symeon was wounded in the hand. After his wound was healed, he continued to serve normally. On August 6, his father visited him. In a related question, he stated that he does not need a sick leave to recover from his injury and that he will be there as long as his homeland needs him.


On the 9th of August, the snipers of the 32nd Squadron were sent to the area of ​​Pachyammos, Kyrenia. This area had assumed great military importance after the end of the first phase of the invasion and the occupation of Kyrenia. Only a small group of soldiers remained in the Squadron camp.


With the beginning of the second phase, the men of the Squadron, in their attempt to keep the area, fought hard with the invaders. But the enemy's superiority was overwhelming. Attila's numerous troops were supported by a large number of tanks, other heavy weapons, as well as by the Turkish Air Force.


When the men of the Squadron received instructions to retreat and regroup in the area of ​​Halefkas, they joined the men of the 361st Infantry Battalion, who were retreating from Agios Epiktitos to Halefkas. In the evening of the same day they spent the night outside Agios Ambrosios and the next morning, on the 15th of August, they entered the village in search of vehicles to go to their destination, according to the instructions they had.


There, Symeon developed gait problems and asked the other men on his team to leave him alone so that they could move faster. The answer he got was that together they fought the invaders, together they will try to move towards their freedom.


However, Halevka had already been cut off from the free areas after its occupation the previous day, when the National Guard line of defense was broken from Mia Milia to Pachyammos, and all units had been ordered to retreat. Thus, those who were heading towards Halevka in the chaos of the retreat, fell fatally into the hands of the Turks who had meanwhile cut off the Nicosia-Famagusta road.


In Halevka, soldiers from various units, including commandos, had been captured. Many of them were taken to the Turkish Cypriot village of Tziaos, which had been turned into a gathering place and, unfortunately, execution.


The trafficking of Symeon after the gathering in Halefka did not become known and since then he did not show signs of life and his fate was unknown.


The remains of Symeon were indeed found in a mass grave in the area of ​​Jiaos, as part of the program of exhumation and identification of remains of the Commission of Inquiry for the missing. The bones of 29 other national guardsmen arrested in Halevka were found in an area of ​​the village of Kornokipos. All were cold-bloodedly executed by Attila's barbarians and extremist Turkish Cypriots, who had been watered down for years by hatred of secession and had become instruments of Ankara's separatist and expansionist policies.


We are deeply saddened by this criminal and inhumane behavior. Great is our pain for all the cases of missing persons. Forty-two years after the Turkish invasion, we are still burying our compatriots who lost their lives on the battlefield or were martyred while in detention.


Our just demand is, finally, for Turkey to cooperate, so that the work of investigating all the cases of our missing persons can continue unhindered. Turkey's list of responsibilities is heavy and unbearable. And he will have to take them all, accepting without restrictions the exhumations in the various parts of the so-called military areas, as well as the access to the archives of the Turkish army where there are certainly data for many cases of our missing. But Turkey must also take responsibility for the double crime of deliberately moving and destroying mass graves of missing persons with the obvious aim of concealing the truth about this enormous inhuman and barbaric behavior that offends every notion of culture.


About a thousand of our compatriots are still missing and we will never stop fighting until all the cases of missing are identified and adequate answers and information are given to their relatives. This is our obligation especially to the relatives who leave life without getting answers about the fate of their loved ones, such as Symeon's parents, Markos and Eleni. Their other three children, Maria, Adamos and Zouvanis, are here with their own children and together we pray to the Most High to rest the soul of Symeon and to classify it in scenes of righteousness.


We are at a very difficult turning point in our efforts to find a solution to the Cyprus problem. And this is not the fault of our side, but the fault of the other side and especially of Turkey, which has not yet taken the necessary decisions to reach a fair and functional solution, which will lead Cyprus to another era. which promises much more to its legal inhabitants, especially to the new generations who look forward to the realization of their dreams in a homeland free, democratic and safe for all. A homeland reunited, without occupation armies.


It is not enough that Turkey insists on its unacceptable demands for the preservation of the anachronistic system of guarantees of the '60s, as well as the stay of a number of occupying troops after the solution and for an indefinite period, it also demands the recognition of Turkish nationals of which not only contradicts the treaties of the European Union, but will also have disastrous consequences in the struggle for the survival of Hellenism in this extreme part of the Eastern Mediterranean.


The criticality of the moments calls us to a course of national consensus and reconciliation and urges us to unity and solidarity.


Today we write the epilogue of the tragic story of a worthy son of the heroic motherland of Paralimni.


Symeon's parents, Markos and Eleni, who passed away with the misery of ascertaining his fate, would be proud of their leventoni today. Dear and respected relatives, brothers of our hero,


You should be proud of the legacy that man has left you, not only to you but to society and to all of us. A legacy that gives you the highest honor and us the responsibility to justify his sacrifice.


I wish the end of the long-term agony for the fate of your man, to calm your soul and alleviate your pain.


Symeon fell on the ramparts of duty and to him, as well as to all those who gave their lives for the freedom and independence of our Cyprus, we owe a lot. We owe our existence as the Republic of Cyprus, as well as our dignity as free people.


We say goodbye today to Symeon Glykainou and I am gratefully honoring his memory. We recognize that we owe him an outstanding debt and we will fight to meet it. We will never stop fighting until we bring freedom, peace and security to this long-suffering place.


May the memory and glory of the Sergeant of the Expeditions of Symeon Glykainos, Markos and Eleni be eternal.