The only parrots of Giannis Efstathiou in Ayia Napa 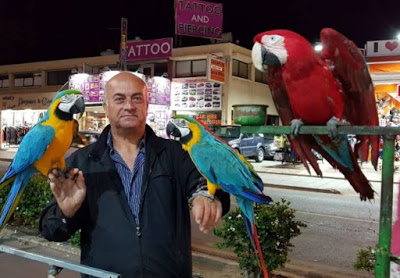 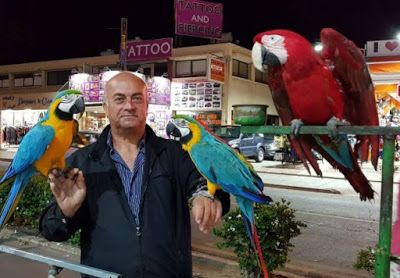 Were you photographed with the famous parrots of Ayia Napa?

During the summer months, in addition to the tourists who flood Agia Napa, the tourist area is also visited by residents from all parts of the island, to spend their holidays there.

Most of them, when they are in Ayia Napa, have it as a custom, before they leave there to return to their homes, to take a photo with the famous parrots.

The editorial team of the City Free Press website recently decided to get to know this unique spectacle in the heart of Ayia Napa and to talk to their owner. 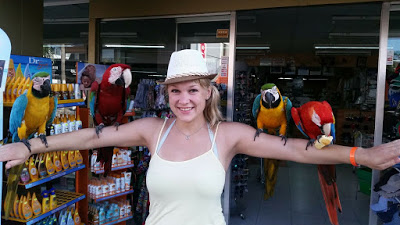 The parrots belong to Mr. Ioannis Efstathiou, from Sotira, who has maintained a department store on 1972 on Agia Napa Avenue.

The parrots are in the store every summer and have been the mascots of the Municipality for years.

We learned that today there are a total of 5 parrots in the store. One is African Gray and the other 4 American Macaws.

It all started when 35 years ago Mr. Ioannis bought 2 African Gray parrots and was very attached to them.

He cared for them, fed them, and slowly taught them to speak. One of the two parrots died a few years ago, but the other is still alive and you will find him in the department store.

He listens to the name "Giannis" and speaks normally like people, sings, imitates the customers of the store and sometimes you will hear him cursing.

Mr. Ioannis told us that he bought it, then, for the price of 150 Cypriot pounds.

He then acquired the other 4. Some of them, as he told us, have been with them for 13 years.

The most famous parrot that Mr. Ioannis had in his shop until today, was the parrot named "Panikakis", which he later sold to the Mayor of Ayia Napa, Giannis Karousos.

The parrots that exist today in the store have the names: Al Capone, Lenos, Theofilos and Andis.

It is noted that Theophilos and Andis are the names of the sons of Mr. Ioannis.

At night, when the doors of the store close, Mr. Ioannis puts the parrots in the car and takes them home with him.

The owner of the parrots loves animals and so he chose to make his yard in Sotira look more like a farm than a backyard. 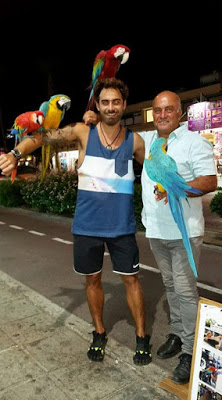