Petretzikis and Buxton on a different cooking show 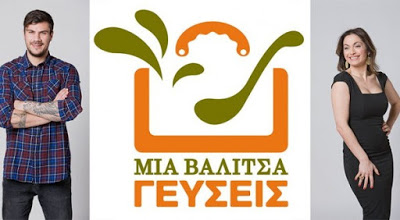 The show A SUITCASE OF TASTE, continues for the second year, with a new "fresh" concept and with new partners who will travel the world through gastronomy. This year our guides will be the well-known chef Akis Petretzidis, the successful presenter and author of cookbooks Tonia Buxton and the journalist Silia Ioannidou. The show aims to present the gastronomic culture of both people from third countries and Cyprus and the influences that its gastronomy has received from the interactive interaction of cultures.

Gastronomy is an integral part of a culture, and through the presentation of recipes, the Cypriot public has the opportunity to learn how to prepare various dishes and / or drinks, while learning about the gastronomic customs and traditions around them. In particular, the show highlights the coexistence of different cultures through cooking. The general public (regardless of cultural and cultural background) acquires knowledge related to the preparation of food. While, at the same time, it promotes the reduction of possible misconceptions that prevail in relation to the various cultures.

A few words about our guides…

Akis Petretzikis: The favorite chef of Greece and not only, was born in Thessaloniki on March 4, 1984. To do his mother's favor, however, after finishing school, he went to the TEI of Accounting. His mother worked in the family business and was away from home for many hours. So from a very early age Akis started cooking, constantly asking his grandmother. He completes his studies and moves to London where he cooks even for the royal family. As long as he lives in England he rarely goes out to have a beer or to have fun. He woke up in the morning and worked all day. There was, in fact, a period when he did three jobs, without a break during the week. In 2010 he returned to Greece, not for a professional opportunity as many people would think, but to take part in the video game "The Master Chef". Six months later, without any doubt, he became the first Greek Master Chef. In 2014 he continued his collaboration with a Greek channel, leaving the morning zone and undertaking two shows, the daily show "Do it like Akis" and the weekly travel cooking show "Stories From the List". Every day, for the last 7 years, she cooks on TV shows. At the same time, people enjoy it on their online show "Kitchen Lab"! At the same time, he is a distinguished chef, preparing a high level of gastronomy. Many multinational companies choose Akis to be the main ambassador of their products. In 2014, Akis started publishing monthly magazines and by the end of the year he had published his first cookbook, entitled "You have to try this". In May 2015, Akis collaborated with the Fresh One Productions company based in London, uploading a video of his recipe on Jamie Oliver's Food Tube network. In May 2015, we first heard about the collaboration between Akis Petretzikis and Jamie Oliver. Since then they continue their collaboration in the food tube and on January 24, 2017 the most famous chef in the world Jamie Oliver posted a photo deifying Akis Petretzikis. "I am so proud that Akis Petretzikis is approaching 500.000 followers, so give him a big follow if you love delicious recipes like this vegetable tart." Akis' role in the show will be to present a recipe that will be based either on the main product of the country we know, or a Cypriot product that is related to a product of that country.

Tonya Buxton: the successful TV presenter, historian, author of cookbooks on Greek and Cypriot cuisine, gourmet cook and beauty expert. She is also the author of the cookbook "Tonia 's Greek Kitchen" and the book "Have a Baby & Look Better Than Ever" about women during pregnancy. Channel Health in collaboration with the NHS created a series of programs where Tonia taught mothers how to have normal pregnancies. His TV series "Beauty and the feast" was shown in the United Kingdom and around the world. Tonia also collaborates with the restaurant chain "The Real Greek". She is the presenter and producer of the award-winning series "My Greek Kitchen" which airs on The Discovery Channel. The series was very popular and so continued for a second season entitled "My Cypriot Kitchen" and this time the theme of Cypriot cuisine. Both the series "My Greek Kitchen" and "My Cypriot Kitchen" were very successful and were shown in 30 countries. Tonia through her stories and visits will introduce us to the country with which the show will deal.

Sylia Ioannidou: Journalist Sylia Ioannidou will be the link between Tonia and Akis and essentially the person who will travel to Cyprus and will introduce her to the citizen of the country in each show. Through interviews, through casual discussions better, Silia will unfold the most unknown, everyday, different and interesting aspects of the country. In this way every day we will learn the manners and customs of ordinary people through their daily lives but also through gastronomy.