Blue flags 2022: Greece is in second place in the world

The big travel agencies abroad, pay special attention to the "Blue Flag" when choosing the destinations they suggest 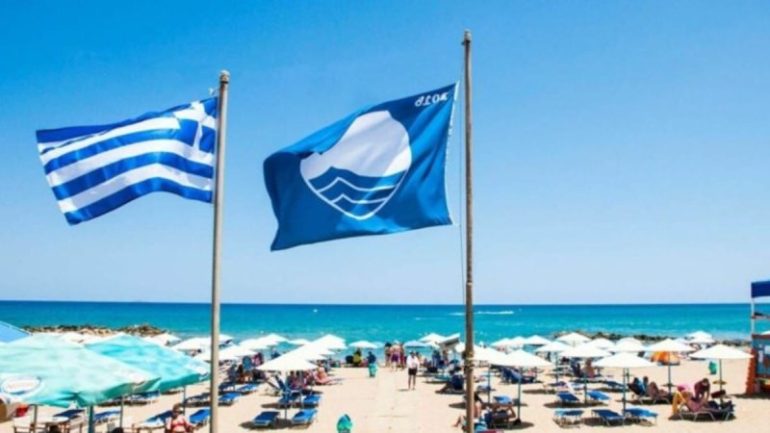 Five hundred and eighty-one Greek coasts, fifteen marinas and six tourist boats won Blue Flags this year, bringing Greece once again in 2nd place in the world, among 53 countries, as announced at a special event by the Hellenic Society for the Protection of Nature (EEPF).

First in Greece in the number of total awards, the prefecture of Halkidiki emerged with 96 flags, followed by Attica, Crete and Rhodes.

"We are blessed as a country - our destinations are sought after worldwide," said Deputy Minister of Tourism Sofia Zacharaki, welcoming the award ceremony and making special reference to the quality of services and human resources in Greece. He pointed out the issues of safety and environmental education related to the institution, while he announced that the Recovery Fund has already secured about 140 million for the construction of marinas, but also to improve accessibility to beaches.

Regarding the tourist season, Ms. Zacharaki stated that "the messages are optimistic for our country", while she expressed the hope that "this year we will exceed our expectations", as she characteristically stated.

In particular, the international commission awarded 4.194 coasts, 732 marinas and 116 tourist boats around the world, while our country owns 14% of the awarded coasts.

In fact, this year, the "Blue Flag", the most recognizable ecological quality mark for coasts, marinas and sustainable tourism boats, completes 35 years of application in the world and in Greece.

As stated by Nikos Petrou, president of the Hellenic Society for the Protection of Nature, "nowadays, with the intensifying environmental crisis, the role of the Blue Flag becomes even more important. "Our goal is to win first place, overtaking Spain." He pointed out the dynamics that exist for the conquest of more than 1000 flags, as he characteristically stated.

For his part, the mayor of Glyfada, George Papanikolaou, opening the event, expressed his joy at receiving the Blue Flag awards and announced that the municipality is proceeding with a holistic redevelopment of its coastal front, with impressive results.

In his greeting, the director of the international program, Johann Durand, pointed out the value of the Blue Flags as part of the strategy to deal with the effects of climate change and environmental degradation, while stating that the institution will evolve significantly in the coming years.

The MP of N. Ilia of ND, and chairman of the Environment Committee of the Parliament, in her greeting referred to the initiatives taken by the government to reduce disposable plastics, the phenomenon of coastal erosion, but also the protection of areas Natura, expressing its full support for the institution.

The vice-president of XEE, Christina Tetradi, stated that "the tourist offices place great emphasis on this institution" and pointed out the efforts of the institutions for the conquest of the Blue Flags. In addition, he spoke of a great opportunity to upgrade the tourism product to the modern requirements of the times, emphasizing that "the new development model must protect the environment and ensure balanced development."

The annual announcement of the Blue Flag awarded beaches took place on Monday in Attica, in two phases:

In the morning, an educational event was held on the award-winning beach of the municipality of Glyfada, with the participation of more than forty children and teachers from schools in the area. The children participated in interactive workshops and attended a lifeguard demonstration by the Panhellenic School of Lifeguarding (PA.SCHNA).

The second phase of the event, which included the announcement of the award-winning beaches, marinas and tourist boats, took place in the afternoon at Glyfada Golf Gardens with the presence of many representatives of the State and sectoral tourism agencies.

The "Blue Flag" is the most recognizable and widespread international ecological symbol of quality in the world. Awarded since 1987, to coasts and marinas that meet the strict award requirements. A prerequisite for awarding a coast with the "Blue Flag", is the water quality in it to be "Excellent". No other quality rating, even "Good", is accepted by the Program. The award lasts one year.

In addition, the remaining 33 criteria for the coast (38 for marinas and 51 for boats) must be met, which refer to cleanliness, organization, information, safety of bathers and visitors, protection of the natural wealth of the coast and coastal space and environmental awareness.

Large travel agencies abroad pay special attention to the "Blue Flag" when choosing the destinations they offer to their customers, as a guarantee of high quality services offered on the coast, but also the protection of the environment and public health. This is known and evaluated by all coast managers, municipalities, hotels and camping, who participate in the program voluntarily.

RIS, through the General Secretariat for Natural Environment and Water, actively supports the "Blue Flag" program, while the Hellenic Society for Nature Protection, signed in October 2013 a cooperation protocol with the Ministry of Tourism, formally sealing the common goals in the effort to the quality of the tourism product.

The Central Union of Greek Municipalities (KEDE), supports the program and urges local authorities to comply with the application of its criteria

Finally, it is reminded that the quality of bathing water is monitored every year by the water directorates of the decentralized administrations and the general secretariat of Natural Environment and Waters of RIS, through control sampling carried out by accredited by the National Accreditation System (ESYD).