Golden Dawn trial: Unanimity for the stay in prison of Kasidiaris and Lagos 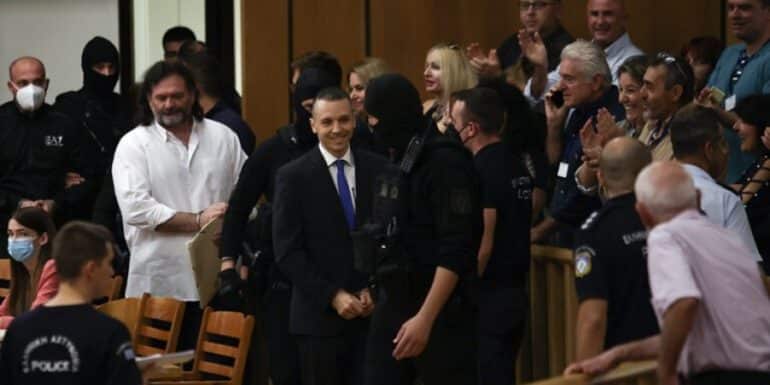 The applications for release from prison submitted by Ilias Kasidiaris and Yiannis Lagos were rejected by the Five-member Criminal Appeals Court. The court unanimously refused to accept the requests for a suspension of the execution of the sentence submitted by the MEP and the former MP, adopting the proposal submitted earlier by the District Attorney who ruled that the two convicted members of the Golden Dawn leadership group should remain in prison .

The judges also unanimously rejected the exemption request of the Prosecutor's Office submitted by Yiannis Lagos. With their decision, the judges imposed on the defendant the court costs, ranging between 50 and 250 euros. The application was heard with a new prosecutor at the headquarters, the Appellants' prosecutor, Eleni Raikou, while the court imposed on the applicant court costs which range from 50 to 250 euros.

"From the proposal that is registered, it appears that the public prosecutor read a section of the first instance decision. Consequently, he did not express a personal judgment and the request for exemption must be rejected," emphasized Mrs. Raikou. Finally, by its decision, the court accepted the request of the defense of the accused, to which the Civil Procedure also agreed, in order to summon to the court the partner of Pavlos Fyssas, in whose arms the musician had died. The woman has only testified to the Police and the Piraeus Investigator.