Diki-Mati: "I came on vacation in Greece - I took the family in black bags"

“This tragedy would not have happened if the services were working. Nobody did anything" 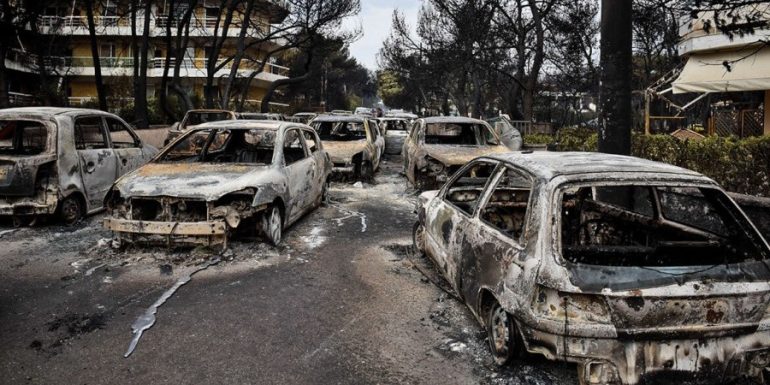 “This tragedy would not have happened if the services were working. Nobody did anything. I believe justice will be served. Since then my life has ended like everyone else here." The words of the witness in the trial for the deadly fire in Mati are shocking. He had come with his family from Poland for a holiday in Greece. Finally, he took both his wife and his child in "black bags"... "They called me and asked me if the child was wearing something around his neck. I understood that they had been found. In a small building there were 4 black bags. In the first was my son and in the fourth was my wife. ... I'm begging you for justice, I'm taking pills, I can't live," said Korzeniovski Zaroslawts, who testified in court, addressing the judges.

The witness, who lost his wife and son when the boat they were in to rescue capsized, said: “We came to spend a safe and beautiful holiday in Greece. All was well until July 23rd. We saw thick smoke and strong wind. The hotel employees reassured us that the fire is not serious. We went up to the first floor. From a distance I saw fire and black smoke near the hotel and complained to the reception. Then the employees told us to leave. We immediately went to our rooms to get shoes and things. I went down and they told me that they were all driven to Rafina."

The witness described what happened from that moment: I started running and looking for my wife and the child. The situation was dire. I saw in a boat the woman and the child. I thought it was an organized rescue. My wife was yelling for me to get on the boat too. There were many people, I was afraid to enter too. I told them you go and I will make it. I was sure he would be saved…. I got a call from my brother from Poland that my wife told him she was on the boat with the child and was asking about me. I told my brother to tell her to save herself and not think about me. He told me that he called back and told him that he was out of battery. Unfortunately both did not make it because the boat capsized and they drowned.

"It's incredible what I'm living! I'm living it and I'm living it again after 4 years!", Panagiotis Dagalos, who lost his wife that day, while he and his 3,5-year-old son managed to survive, testified a little earlier. "I met people burned and dead. Either on land, on roads everywhere. I want to tell you that me and my family were 180 meters from the sea. The fire burned us at 18:40, that is 2,5 hours after it started. This time was not enough to save my family. Me and my child got up! To be here and describe to you what happened, we were saved by chance. We were saved by chance 180 meters from the sea. No one was found to notify us in any way. Those who burned there had no other choice," the witness claimed.

With sobs, Mr. Dagalos testified and described the images he saw: "I will not forget the man I saw in the next car from me and when I left he was still in his car. The State, regardless of weather conditions, I do not accept that they did not have sufficient time and knowledge to prevent us from this disaster. I am very outraged and angry with what happened. It is not negligence. They didn't make a decision on the spot. They had hours to decide. The fire from its hearth was not found suddenly in Mati. If we burned 180 meters from the sea, others drowned in the sea! In 2022? Where do we live? I'm looking for an excuse and I can't find one! By luck we were spared and we are faced with our psychological problems, the reality we live in and the repeated failures of the state to protect the lives of citizens".

The witness referred to his efforts to find his wife. "It was getting dark and I decided to look for her. I leave my child with my colleague's mother. I went ashore and couldn't find her anywhere on the beach. In the sea there was nothing but people. There was no Coast Guard, there was no one to save us. Only once did I see boats trying to get some people on board. Things had calmed down a bit and I decide to look for her from the same path. I found myself on Poseidonos Avenue. Cars everywhere. Some burn, some don't. Trees caught fire. I walked to our car. As I walked I saw everything burnt. When I got to the car I found a dead body, a charred rock. I couldn't believe that this was my wife...".