"Wings" made 4.600 pounds that a businessman hid under firewood in Larissa. 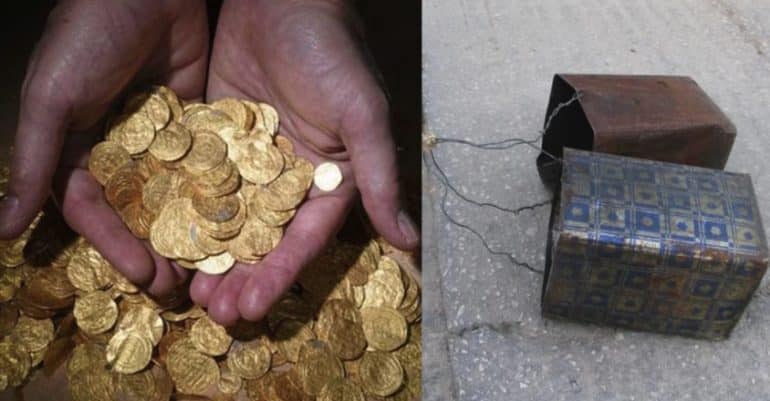 A tin full of gold pounds "buried" under tonnes firewood, which eventually "made wings", has brought two families face to face in court, as the owner of this huge fortune accuses his wife's sister of being the thief!

The case is being heard at the Larissa Criminal Appeals Court and the 68-year-old sister-in-law of the 76-year-old businessman is sitting in the defendant's dock, who names her as the person who knew the hiding place of the treasure in his father's house in a town of Trikala.

This is 4.600 gold pounds worth almost 2.000.000 euros, which the businessman had hidden under the firewood believing that no one would find them. But the pounds took flight and his wife's sister, who knew the scene, was arrested and charged with aggravated theft of an object valued at more than €120.000 by profession, by habit and by continuance, as well as money laundering.

According to the local newspaper "Eleftheria", the pounds were what the 76-year-old acquired from his professional life, starting penniless in his village to develop into a great businessman with activity even abroad, building a staggering fortune. But in March 2011 he found that the pounds had been stolen and lost the ground from under his feet.

"To tell you my sin, our mind went to someone else. We had them in our work, we married them, we raised them. He turned out to be a big devil..." he emphasized yesterday in court, referring to his sister-in-law. She herself, as she said, in order to distract the investigations, attributed the theft to the notorious Paleokosta who was active in the wider area.

"He was telling me about Palaiokostas," revealed the businessman and noted that the sister-in-law then confessed to the police theft.

"My wife was shocked when she found out it was her sister. We provided them with everything... I say this with pain in my soul, to have done them so well and to be robbed..." said the 76-year-old and described to the judges that they assured him that "we will give you the money", but this never happened.

According to the case file, a large amount of money was found and confiscated in the sister-in-law's account, while, as was told in court by a witness priest of Trikala, the 68-year-old handed over 42.000 and 50 pounds to him, because "she had nowhere to leave them". She however argued in court that the pounds were an inheritance from her father and contrary to what she confessed, she denies the theft.

The trial will continue on December 15 with the plea of ​​the accused, who was found guilty at first instance in 2019 and sentenced to 13 years in prison, suspended.