The heroine kindergarten teacher who saved the lives of 40 children

"With admirable composure he managed to save all the babies" 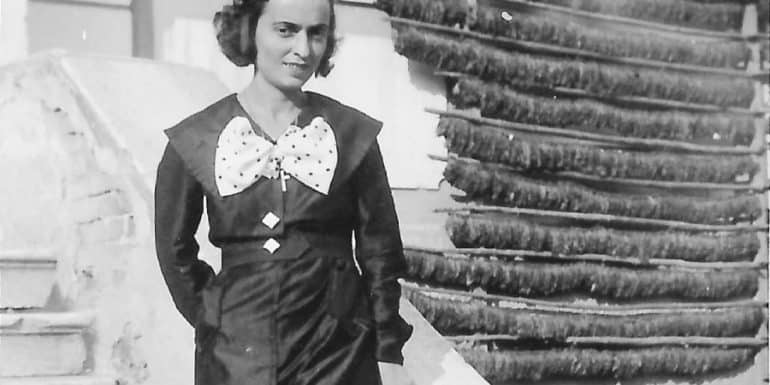 It is important for a local community to remember and honor citizens who, with their actions and initiatives, marked the course of the place, highlighting their humanity and bravery, even if ninety years have passed.

This was also done by the municipality of Prosotsani in the Greek island of Drama, which during a modest and emotionally charged event honored the memory of the kindergarten teacher Aretis Vogiatzis - Meladini, giving her name to the 1st kindergarten of Prosotsani.

Also present at the event was the son of the kindergarten teacher, Vassilis Meladinis, who did not hide his emotion for the posthumous honor to his mother's face.

Areti Vogiatzi – Meladini was born in Drama in 1915. At the age of 12, she went to the girls' school in Serres, where she graduated as a kindergarten teacher three years later. He took the oath in Drama and was appointed to Prosotsani in 1930. During the third Bulgarian occupation (1941-44), all the teaching staff of eastern Macedonia were transferred to Thessaloniki. There, during the war years, he served in the 12th kindergarten. She married in 1941 the teacher Aristidis Meladini from Prosotsani. She returned to Prosotsani in 1947, together with her husband and her two children, Vasilis and Eleni, and worked as a kindergarten teacher until 1965, when she retired. He died in Athens on May 18, 1979, at the age of 64.

"With admirable composure he managed to save all the babies"

The director of the 1st Kindergarten of Prosotsani, Evangelia Gaziotou, in her speech emphasized, among other things: "This year marks the 91st anniversary of an unknown to most, but important event concerning the local history of Prosotsani. In November 1931, the then only kindergarten in the village burned down due to a fire that occurred in the basement where a carpentry workshop was housed.

Kindergarten teacher Areti Vogiatzi was only 16 years old when the event in question happened and her second school year in Prosotsani. With admirable composure, he managed to rescue all the children, about forty, from the burning building before it collapsed."

"The work of the teachers at that time, the conditions, the schedules and the service obligations," Mrs. Gaziotou emphasized at another point in her speech, "were completely different from today. The effort of everyone then was, beyond learning, to entertain the poverty of the people. On her own initiative through her interventions in the Inspectorate, she introduced supervisory means of teaching in the form of educational games of the Montessori school. Areti often staged theatrical performances, writing the music, directing and painting the sets, thereby enticing the children of her school and not only in this creativity. This was a trait he maintained to the end.'

The late George Voultsiadis, who experienced this event as a child, describes it in his book "Prosotsani through History". "I vividly remember our adventure in 1931, when the flimsy building next to the schools, where the kindergarten was housed, burned down. Her self-sacrifice and self-denial were exemplary. Forty children took us down from the windows, while on the street hundreds of residents were anxiously waiting to welcome us into their arms. The last time she jumped herself, when the floor left under her feet."

At the end of the event, the son of Areti Vogiatzi-Meladini, Vassilis Meladinis, offered the 1st Kindergarten of Prosotsani a collection of stamps with themes and fairy tales with which his mother, as she said, "educated her children". As she explained, "when the babies crossed the threshold of the kindergarten, for as long as they were with her, they were her children."